Europa Nostra’s Secretary General Sneška Quaedvlieg-Mihailovic addressed the Culture Ministers of the EU-Southern Partnership as a special guest representing civil society during the Conference of the Ministers of Culture of the Mediterranean convened by the Italian Ministry of Culture on 16 and 17 June in Naples, Italy. The conference was attended by representatives of 41 official delegations from the Euro-Mediterranean region and a reduced group of invited stakeholders. 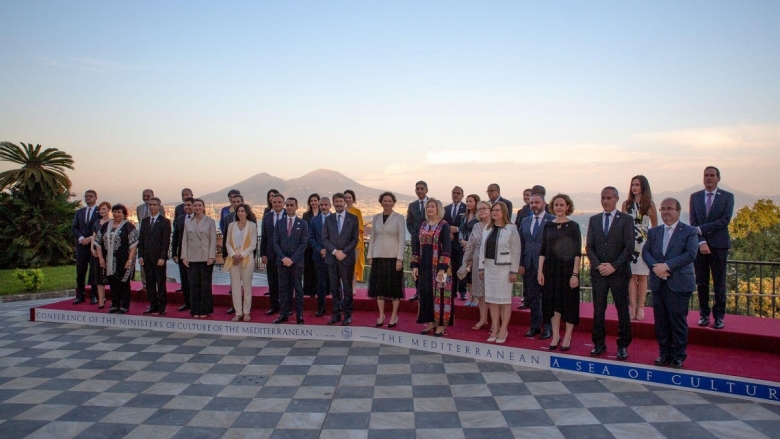 Heads of participating delegations at the Conference of the Ministers of Culture of the Mediterranean. Photo: Italian Ministry of Culture

The Conference of the Ministers of Culture of the Mediterranean, held in the impressive heritage setting of the  Palazzo Reale di Napoli on 16 and 17 June, gathered culture leaders of the European Union and the Mediterranean for a conversation on how to better protect and enhance the shared and distinctive culture, heritage and landscape of the region. The purpose of the conference was to develop joint strategies and actions to protect and enhance culture and cultural heritage as a common good of the Euro-Mediterranean region and to launch a “Naples Process” for cultural collaboration in the Mediterranean.

This was the very first meeting ever dedicated entirely to culture and cultural heritage in the framework of the EU-Southern Partnership. In addition to Ministers or their representatives  from the EU and Southern Neighbourhood partner countries, the conference was also attended by representatives from other countries in the region, relevant international organisations, including UNESCO, the Union for the Mediterranean and ICCROM, along with civil society organisations, such as ALIPH, Europa Nostra and ICOMOS, with a total of 41 participating delegations.

The two-day programme was structured around 3 topics: 1) culture as a vector for peace and security; 2) culture as a driver of sustainable development and the green transition, and 3) the need to strengthen resilience, build prosperity and seize the digital transition. Three technical preparatory sessions with international experts focusing on each one of these topics preceded the Ministerial conference.

Europa Nostra’s Secretary General contributed to the session on “Culture, driver and enabler for sustainable development and the green transition”. In her forceful address, also on behalf of the Climate Heritage Network – of which Europa Nostra holds the Co-chairmanship for Europe and the Commonwealth of Independent States – Sneška Quaedvlieg-Mihailovic highlighted the vital contribution of cultural heritage to imagine and realise a post-carbon future in the Euro-Mediterranean area and beyond. She also called on the EU and the Southern Partnership leaders to place the shared cultural resources of the region at the heart of all climate and sustainability efforts, in particular with a view of the upcoming COP27, which will be hosted in Egypt, a country in the intersection of Africa and the Mediterranean.

“The situation is alarming, but let me share with you some encouraging messages: While being a climate change hotspot, the Mare Nostrum is also a Sea of Culture, shaped by centuries of cultural and economic exchanges. Let us rediscover and learn from our heritage, our ancestral knowledge and wisdom, traditional skills, materials and food, in order to change and improve our way of life and our interaction with nature. Being a Sea of Culture, the Mare Nostrum is  also a Sea of Opportunity”, she said.

📢Ministerial Plenary #MedCulture
Sec Gen @SneskaEN also on behalf of @ClimateHeritage conveys a message of hope: “While being a climate change hotspot, MARE NOSTRUM is also a #SeaOfCulture. Let us mobilise our vast cultural resources to imagine & realise a postcarbon future!” pic.twitter.com/xW45Njs1sO

Europa Nostra’s Secretary General also recalled the messages of the European Cultural Heritage Green Paper “Putting Europe’s shared heritage at the heart of the European Green Deal” produced by Europa Nostra, ICOMOS and the Climate Heritage Network with the support of the European Investment Bank Institute. She also echoed the interventions made by Teresa Patricio, ICOMOS President, and HRH Princess Dana Firas, President of the Board of Directors of Petra National Trust – both civil society organisations and active members of the Climate Heritage Network.

“Together with ICOMOS and the Climate Heritage Network, we call on the European Union Institutions, Member States and key partners to champion this process, together with their counterparts from the Mare Nostrum,” she added.

♻️@COP27_Egypt an opportunity to be seized to place culture at the heart of climate action. We need your support! pic.twitter.com/jVv27jz9WA

At the closing session of the Ministerial Conference, Ministers of Culture unanimously adopted the Declaration of the Naples Conference of the Ministers of Culture of the Euro-Mediterranean region / EU Southern Partnership, to which Europa Nostra was invited to contribute. The Naples Declaration reflects the participating Ministers’ commitment to the development of cooperation and joint actions to protect and valorize the region’s shared heritage as a vector for understanding, sense of belonging, sustainable development, knowledge and creativity. Among the concrete proposals, the Declaration calls for the promotion of new joint initiatives to foster culture-led development and regeneration, including the establishment of a “Capital of Mediterranean Culture”, on the model of the European Capitals of Culture, in coordination with EEAS and the Union for the Mediterranean and taking into account similar initiatives, including the African Capital of Culture and the Capitals of Arab Culture programmes. 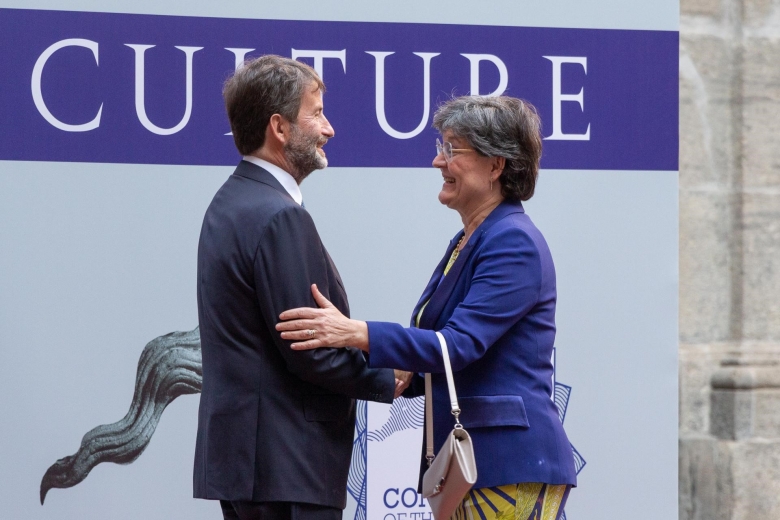 Europa Nostra welcomes and fully endorses the ambitious and comprehensive Naples Declaration and stands ready to mobilise its large pan-European network of members and partners in the Euro-Mediterranean region – also in our role  as Co-Chairs of the Climate Heritage Network and through the recently-launched Europa Nostra Heritage Hub for South Eastern Europe and the Eastern Mediterranean based in Athens – to widely disseminate its key messages and put forward concrete actions to attain its objectives.

📢At the Closing of the #MedCulture Ministerial Conference, Ministers of Culture unanimously adopt the Naples Declaration with a round of applause 👏

📜We fully support this ambitious Declaration & are proud to have contributed to its preparation as Civil Society Voice. pic.twitter.com/1wakxL9zkY

Opening of the Ministerial Conference

The inauguration concluded with an exceptional concert of lyric music hosted at the historic San Carlo Theatre by the Mayor of Naples, Gaetano Manfredi, and a gala dinner with all the participating delegations.

The second day of the Ministerial Conference on June 17 was introduced with opening remarks from the Italian Minister of Culture, Dario Franceschini, who recalled: “Naples is the ideal scenario to gather all Mediterranean partners. We are called to embrace the Mare Nostrum: Naples has always been a place with a global outreach and an outlook to the future.”  Opening remarks from high level representatives from EU institutions, national authorities and international organisations followed.

In her opening remarks, Roberta Metsola, President of the European Parliament, reaffirmed the commitment of the European Parliament to “place culture and cultural heritage at the centre of the EU political agenda, which must be also reflected in more financial support”. “Cultural heritage is not only the past but also the future – it is fundamental for citizens and their communities”, she added.

Mariya Gabriel, European Commissioner for Innovation, Research, Culture, Education and Youth, then took the floor “Culture is a powerful tool for citizens in the two shores of the Mediterranean, and a factor of cohesion and socioeconomic growth,” she noted. Commissioner Gabriel concluded by calling all relevant stakeholders to “put forward concrete actions to strengthen our capacities to advance intercultural dialogue in the region”.

In her message, Rima Abdul-Malak, Minister of Culture of the Republic of France, also on behalf of the French Presidency of the Council of the EU, quoted the Mediterranean singer Georges Moustaki, reminding: “In this basin, there are three continents and centuries of history. There is a beautiful summer that is not afraid of autumn”.

Maciej Popowski, Acting Director-General for Neighbourhood and Enlargement, stressed that culture is an important tool for international and sustainable development, and should be “a cornerstone of any cooperation aimed at renewing the EU agenda in relation with the Mediterranean”.

Stefano Sannino, Secretary General of the European External Action Service, highlighted the key values of EU Cultural Diplomacy, including, among others, the protection of cultural heritage, people-to-people contacts as opposed to top-down traditional diplomacy, the promotion of a sense of belonging, as well as co-creation, co-fertilisation and mutual learning.

Last but not least, Nasser Kamel, Secretary General of the Union for the Mediterranean, called the Mediterranean “an Agora for multicultural dialogue” and pledged for a multi-stakeholder cooperation in the region with the due involvement of civil society and youth in particular “Culture is the common language of the Mediterranean,” he added.

Three plenary sessions followed, each one of them focusing on the 3 main topics of the Conference: 1) culture as a vector for peace and security; 2) culture as a driver of sustainable development and the green transition, and 3) the need to strengthen resilience, build prosperity and seize the digital transition. Each session gathered the interventions by Ministers and invited civil society organisations.

The first session on “Culture, an asset for Peace and Security” focused on joint response mechanisms and regional coordinated action to safeguard cultural heritage in disasters and crisis scenarios and to fight illicit trafficking of cultural goods in the Euro-Mediterranean region. Among the speakers figured Atanas Atanasov, Minister of Culture of the Republic of Bulgaria; Rima Abdul-Malak, Minister of Culture of the Republic of France; Atef AbuSaif, Minister of Culture of the Palestinian National Authority; Sarkis El Khoury, Director General of Antiquities of the Lebanese Ministry of Culture; Irmgard Maria Fellner, Director for Cultural Relations Policy and Deputy Head of the Directorate-General for Culture and Society of the Federal Republic of Germany; Bjorn Berge, Deputy Secretary General of the Council of Europe; Gennaro Migliore, President of the Parliamentary Assembly of the Mediterranean; Alberto Garlandini, President of the International Council of Museums (ICOM); Mariya Polner, Senior Policy Advisor at the World Customs Organization; Tess Davis, Executive Director of the Antiquities Coalition, and Valéry Freland, Executive Director of the International alliance for the protection of heritage in conflict areas (ALIPH)

The last plenary session on “Culture and a world in transition” focused on regional strategies and actions to strengthen resilience, build prosperity and seize the digital transition in the cultural and creative sectors, including by fostering the mobility, upskill and reskill of artists and culture professionals in the Euro Mediterranean region. Among the speakers in this session were Haifa Najjar, Minister of Culture of the Hashemite Kingdom of Jordan; Ines Abdeldayem, Minister of Culture of the Arab Republic of Egypt, and Josep Ferré, Executive Director of the Anna Lindh Foundation.

Speech of our Secretary General

Full recording of the Ministerial Conference