On 1 November, Europa Nostra was appointed as the new Regional Co-Chair of the Climate Heritage Network (CHN) for Europe and the Commonwealth of Independent States, during the CHN 2021 General Assembly held in Glasgow in the framework of the 26th UN Climate Change Conference of the Parties (COP26). As Regional Co-Chair of the CHN, Europa Nostra will be able to contribute in a coordinated and efficient way to further unleash the potential of culture and heritage in tackling this generation’s defining task – climate change. Europa Nostra will mobilise its wide network – including the European Heritage Alliance – expertise and advocacy skills to further strengthen and enlarge the outreach and impact of the Climate Heritage Network in Europe and globally. 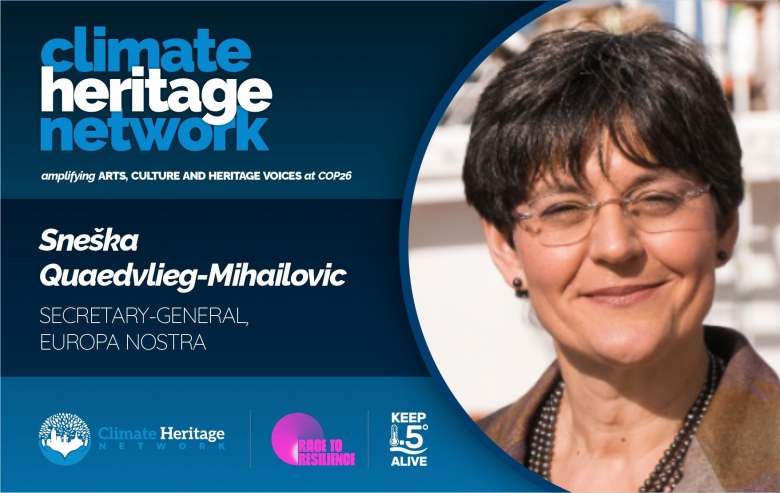 The Climate Heritage Network, of which Europa Nostra is a founding member, is a network of arts, culture and heritage organisations committed to aiding their communities in tackling climate change and achieving the ambitions of the Paris Agreement.

During her acceptance speech, Sneška Quaedvlieg-Mihailović, Secretary General of Europa Nostra stated: “Europa Nostra is fully committed to become a positive force for the heritage movement for climate action in Europe. Our support for the creation of the Climate Heritage Network back in 2019, our efforts to publish this year the first paper ever linking cultural heritage to the European Green Deal and our active contribution to the COP26 are completely in line with this vision. We are truly humbled for today’s appointment as regional Co-Chair of the CHN and we stand ready to take on this exciting and challenging role. May our joint efforts lead to place cultural heritage where it belongs: at the very heart of the green transformation of our societies”.

Dr Ewan Hyslop, Head of Technical Research and Science at Historic Environment Scotland (HES), and outgoing Europe Co-Chair of the CHN, said: “At HES, we’re immensely proud to have supported the development of the Climate Heritage Network. Since hosting the formal launch in Edinburgh just two years ago, it has been a privilege to see the network grow, with now over 250 members. The mobilisation of international arts, culture and heritage for climate action is more crucial than ever. Through its presence at the COP26, the Climate Heritage Network will give a powerful voice to the significance of arts, culture and heritage in tackling global climate change. HES remains a committed member of the Climate Heritage Network as we look forward to this exciting next step in its journey.”

“Today, as we are about to take over from @HistEnvScot the role of regional Co-Chair covering Europe and the CIS, we are aware of the huge responsibility ahead of us. With your commitment and advice, we shall do our utmost to live up to your expectations” commented @SneskaEN.🌍🇪🇺 pic.twitter.com/gaVVPBS2ck

Europa Nostra stands ready to creatively and effectively mobilise its large pan-European network for transformative climate action, including the over 50 heritage networks of the European Heritage Alliance, which we have coordinated since its creation in 2011. Thanks to our fruitful and long-standing partnerships with the wider cultural and creative worlds, Europa Nostra has also a privileged position to serve as a common platform on which Europe’s artistic, cultural, heritage and creative actors can unite.

In the past couple of years, Europa Nostra has been active in mobilising the heritage ecosystem for climate action and we aim to further build and capitalise on this experience. We firmly believe that Europe, as one of the world’s largest legacy GHG emitters and with a comparatively well funded culture sector, has both the obligation and a great opportunity to lead the global coalition for culture-led climate action. Although it still falls short, the European Union is pursuing some of the most comprehensive climate action frameworks worldwide: the European Green Deal and the New European Bauhaus. Engaging, expanding and assessing these initiatives provide a valuable common enterprise for cultural operators across Europe interested in advancing transformative change.

Europa Nostra partnered with the Climate Heritage Network, ICOMOS and the European Investment Bank Institute to produce the European Cultural Heritage Green Paper in March 2021, which scoped the ways cultural heritage can contribute to the ambitions of the European Green Deal in areas like mobility, circular economy, energy, food and agriculture and buildings. In the same month, Europa Nostra was selected among the first 13 partners of the European Commission’s New European Bauhaus initiative. These efforts – together with our recently published Venice Call to Action: “For a New European Renaissance”, which calls on European leaders and stakeholders to further stress the relevance of culture-based climate action – are illustrative of our serious engagement with issues of decarbonisation, transformative change and the Paris Agreement.

The 26th UN Climate Change Conference of the Parties (COP26) is taking place in Glasgow from 31 October to 12 November 2021. The COP26 will bring parties together to accelerate action towards achieving the vital goals of the Paris Agreement and the UN Framework Convention on Climate Change. Europa Nostra will contribute to 4 heritage-related events organised in the framework of the COP26 (read related news item).

You can rewatch the event here.