Europa Nostra and the Global Heritage Fund (based in San Francisco) and Europa Nostra are joining forces to support the communities protecting endangered cultural heritage, initially in Europe, and eventually around the world. Through this mutually beneficial partnership, these leading heritage organisations will pool their efforts, networks and resources together to develop high-impact projects aimed at protecting cultural heritage and supporting community empowerment.

The work of both organisations is aligned and complementary with the common goal of ensuring the effective protection of cultural heritage and harnessing its potential for sustainable development. This transformational partnership will strengthen each other’s networks and enhance capacities through mutual support, shared expertise, and combined action.

“As we promote sustainable protection for historic sites and traditions around the globe, the experience of Europa Nostra over many years of successfully defending Europe’s cultural heritage will be invaluable. We look forward to working together for the preservation of heritage in Europe and throughout the world!” said Nada Hosking, Executive Director of Global Heritage Fund.

Launching the partnership in Sighisoara, Romania

Europa Nostra Secretary General Sneska-Quaedvlieg-Mihailovic, together with Global Heritage Fund Executive Director Nada Hosking and Chairman Daniel K. Thorne, announced the partnership on 12 April in the World Heritage town of Sighisoara in Romania on the occasion of the Conference “European Heritage: shared Practices and regional Specificities’ organised by the Romanian Presidency of the European Union.

The European Conference in Romania provided a perfect setting to formalise this cooperation, as both organisations have strong ties in this country by virtue of ongoing programmes and solid networks on-site. Currently, Global Heritage Fund is working in the commune of Daia, located in the heart of the Transylvanian Alps, to support the preservation of the threatened vernacular architecture and cultural landscape. The programme includes documentation and restoration of heritage assets, supporting the implementation of a local heritage policy as well as public education activities and the revival of traditional building crafts. Europa Nostra has also a strong presence in Romania, with 11 Member and Associate organisations active in the country and a network of excellence composed by 11 Romanian Laureates of the European Heritage Awards / Europa Nostra Awards. In addition, 3 Romanian sites have been selected for the 7 Most Endangered Programme, including the emblematic Roşia Montană mining landscape in Transylvania, which Europa Nostra has supported for over a decade and included in its very first list of the 7 Most Endangered sites in Europe back in 2013.

We are proud to announce a transformational partnership between @Global_Heritage & @europanostra.

We look forward to joining forces for heritage protection through this new agreement.#strongertogether pic.twitter.com/SrptK2A0r5 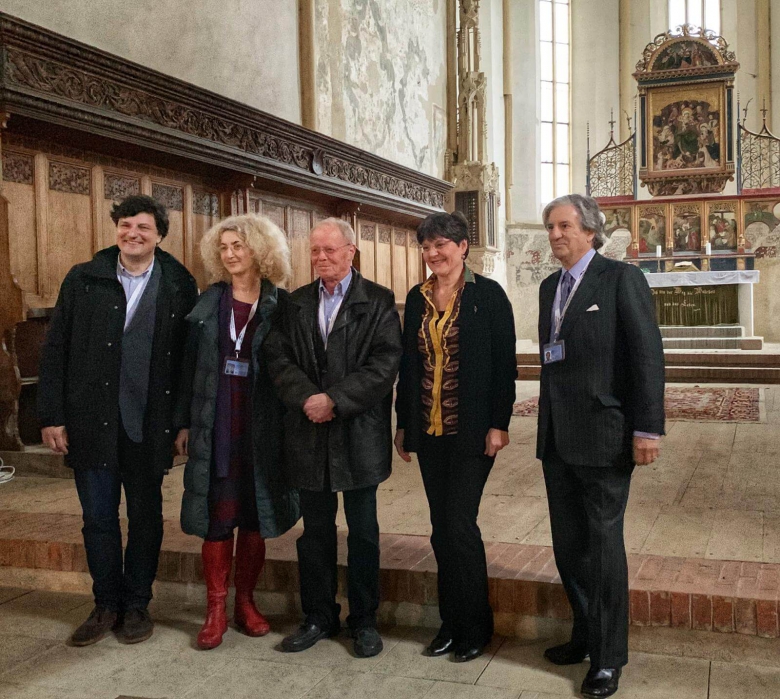 We look forward to joining forces for heritage protection through this new agreement.

The first steps of a mutually beneficial cooperation

In an effort to ensure synergies between the work of the two organisations, Global Heritage Fund Executive Director Nada Hosking has joined the international advisory panel of Europa Nostra’s 7 Most Endangered Programme. Comprised of specialists in heritage conservation, restoration, and management, this advisory panel in charge of evaluating the applications received for the programme and shortlisting Europe’s most endangered monuments and sites. It will meet in November 2019 in the Hague to evaluate the nominations for the 2020 List of 7 Most Endangered Sites in Europe.

In addition, Europa Nostra Secretary General Sneska-Quaedvlieg-Mihailovic has been invited to join the ‘Women Leaders in World Heritage’ celebration on 19 September 2019, hosted by Global Heritage Fund in St. James’s Palace Royal Courts in London. These are only the first steps towards a sustained, mutually beneficial cooperation between the two organisations.

“Our partnership is founded upon and driven by an ultimate common goal: that of protecting our shared cultural heritage in Europe and in the world. The world-wide outreach of the Global Heritage Fund will reinforce Europa Nostra’s capacities at an international scale, taking our citizens’ movement for cultural heritage one step further. Together we are stronger, and I am delighted to see this promising partnership already bearing fruits”, pointed out Europa Nostra Secretary General Sneska-Quaedvlieg-Mihailovic.

Europa Nostra and Global Heritage Fund will continue working together with the common goal of protecting and preserving our shared cultural heritage. Concretely, joint projects will be developed building on the expertise and know-how of each organisation. Together, the two organisations will promote the co-developed projects and will co organise fundraising events to support them. Both Europa Nostra and Global Heritage Fund are certain that this new partnership will enhance their impact and action through combined and more efficient use of resources. Both partners look forward to furthering heritage protection throughout Europe and the world.

More about the Global Heritage Fund

Global Heritage Fund (GHF) empowers communities through historic preservation beyond monuments. Since 2002, GHF has helped local communities to save 28 sites in 19 countries with over 100 partner organizations. Using its Preservation by Design® methodology of community-based planning, conservation science, and strategic partnerships, GHF has invested over $30 million and secured $25 million in co-funding to ensure sustainable preservation and responsible development. Learn more at www.globalheritagefund.org.

Europa Nostra is the pan-European federation of heritage NGO’s which is supported by a wide network of public bodies, private companies and individuals. Covering more than 40 countries in Europe, the organisation is THE voice of civil society committed to safeguarding and promoting Europe’s cultural and natural heritage. Founded in 1963, it is today recognised as the most representative heritage network in Europe. Plácido Domingo, the world-renowned opera singer, is the President of the organisation. Europa Nostra campaigns to save Europe’s endangered monuments, sites and landscapes, in particular through the 7 Most Endangered programme run in partnership with the European Investment Bank Institute. It celebrates excellence through the European Heritage Awards / Europa Nostra Awards. It also contributes to the formulation and implementation of European strategies and policies related to heritage, through a structured dialogue with European Institutions and the coordination of the European Heritage Alliance 3.3. Europa Nostra has strongly promoted and actively contributed to the European Year of Cultural Heritage 2018 and is dedicated to working to ensure a lasting legacy of this Year.