The hybrid event “Powering climate action through heritage policies, organisations, research and public programmes” took place on 11 November as a part of the 26th UN Climate Change Conference of the Parties (COP26) in Glasgow. Aimed at inspiring radical change for climate action in and with the cultural sector, the event brought together a group of high-profile speakers and experts, including the Secretary-General of Europa Nostra, Sneška Quaedvlieg-Mihailović. It was organised by Europa Nostra together with the Joint Programming Initiative on Cultural Heritage and Global Change, the Climate Heritage Network, and Reimagining Museums for Climate Action, with the support of the Italian Ministry of Culture and the European Commission’s Directorate-General for Education and Culture.

The panel discussion was moderated by Rodney Harrison, Professor of Heritage Studies at UCL Institute of Archaeology, University College London. In his welcoming remarks, Harrison emphasised the need for radical action across the heritage sector to create a real difference in climate policies and highlighted the vital role of museums to both achieve a carbon zero future and to foster public participation in climate action.

Sneška Quaedvlieg-Mihailović applauded the attention that culture-based climate action has received at COP26, but stressed that more needs to be done to accelerate climate action, especially through art and cultural heritage. 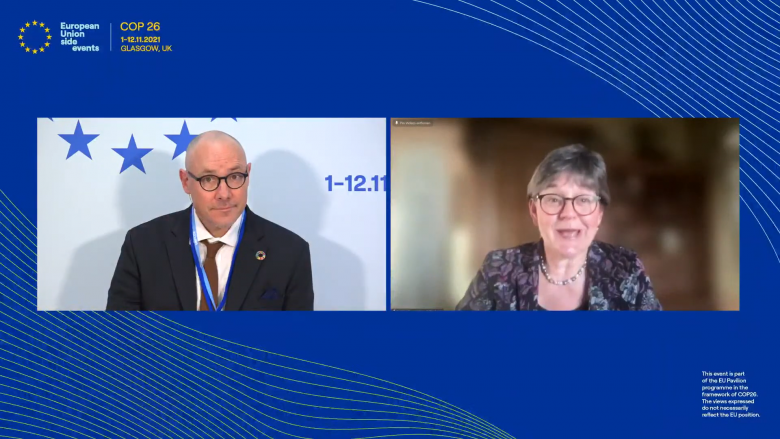 Henry McGhie of Curating Tomorrow stressed the importance of closing the gap between people, rights and institutions, focusing on how more people should be able to engage with and claim their rights through museums and cultural institutions. Furthermore, McGhie noted that we often tend to associate climate action solutions with science and technology, but that the greatest challenges are cultural and social, which is why the culture sector should also provide real solutions.

Erminia Sciacchitano, a member of the Minister’s Cabinet at the Italian Ministry of Culture, presented the historic Rome Declaration of the G20 Ministers of Culture, issued in Rome in July 2021. The Rome Declaration, led by the Italian Presidency and signed by the Ministers of Culture of each Member State of the G20, identifies five key priorities: the protection of cultural heritage; culture and climate change; culture and education; cultural and creative industries; and culture in the digital transformation. Erminia Sciacchitano stressed how much the cultural landscape has changed, as the G20 finally recognised the importance of addressing climate change through culture. Furthermore, she emphasised how these goals are linked to the Paris Agreement and how the Rome Declaration provides a framework for cultural heritage mobilisation for sustainability.

❗️LIVE from our #COP26 Joint Event at @eusideevents!@esciacchitano from @MiC_Italia recalls the historic Rome Declaration of @g20org Ministers of Culture issued last July, which provides a framework for #CulturalHeritage mobilisation for #Sustainability . pic.twitter.com/6OfF9jADhy

Anne Grady, Policy Officer at the Directorate-General for Education, Youth, Sport, and Culture of the European Commission, presented the work of the Open Method of Coordination (OMC) group of Member States on “Strengthening Cultural Heritage Resilience for Climate Change” as well as various relevant EU programmes and projects linked to cultural heritage and the climate. She explained that the OMC working group provides a framework for pan-European cooperation while gathering best-practice cases and working to safeguard important heritage for future generations. Anne Grady also presented the Council of the European Union’s conclusions on the Work Plan for Culture 2019-2022.

Katherine Warren from the Joint Programming Initiative on Cultural Heritage and Global Change (JPICH) stressed the relevance of international cooperation to address climate challenges, which no country can tackle alone. Katherine Warren went on to present the challenges and new perspectives for cultural heritage research, while arguing the importance of joint research on the link between the climate and cultural heritage across regions and academic fields.

Claire McGuire, from The International Federation of Library Associations and Institutions (IFLA), presented “Libraries Empowering Climate Action” and stressed the importance of a “green library movement”. She spoke about the impact that libraries can have in helping international organisations empower members to take further climate action at national and regional level. She also highlighted the importance of international networks cooperating for climate action, referencing the Climate Heritage Network’s Manifesto presented at COP26.

Alberto Garlandini from ICOMOS, in a video message broadcast at the event, noted how ICOMOS is engaged in supporting museums in adapting to climate change. He highlighted that museums are among the most trusted institutions in society, and cultural heritage should stand center stage in countries’ climate change adaptation and communication plans.

Jose Luiz Pedersoli presented the view of ICCROM, an intergovernmental organisation that is fully committed to helping cultural heritage institutions in their climate actions, providing, for example, over 200 tools for heritage institutions linked to reaching the United Nations’ 17 Sustainable Development Goals.

Miranda Massie, Director of the Climate Museum, NYC, talked about the recent exhibitions curated by the museum and underlined the importance of the arts responding to the “longing for home”, as “many people in our society feel and create hope and agency for people wanting to protect the planet and the environment”.

Closing the discussion, Rodney Harrison reminded participants of the crucial role of the arts and the cultural heritage sectors for facilitating transformative climate action and called for future cooperation and closer synergies among the actors involved in the event to empower all parts of society to participate in effective heritage-led climate action.