On 22 April, Europa Nostra and KEA European Affairs, on behalf of the ILUCIDARE Consortium, co-hosted the final conference of the 3-year EU-funded ILUCIDARE project. The conference, entitled “ILUCIDARE Playground: turning a new page for heritage”, took place in Brussels and gathered a diverse audience of 70 people on-site and 115 online participants from all over Europe and beyond.

The aim of the playground was to take stock of the achievements of the ILUCIDARE project and further disseminate its learning outcomes to facilitate its uptake by other projects, actors and policies. The programme revolved around the many practical tools produced within the project to support heritage-led innovation and international relations, and put the spotlight on the actors of the ILUCIDARE community who have co-created or benefited from these tools.

The all-day conference included a series of institutional greetings, inspirational speeches as well as interesting panel discussions with heritage practitioners and policy-makers to share reflections and experiences from the 3-year ILUCIDARE journey. It also provided opportunities for networking, celebration and exchange. The playground was moderated by Lorena Aldana, European Policy Coordinator at Europa Nostra, on behalf of both Europa Nostra and the ILUCIDARE Consortium.

During her opening remarks, Lorena Aldana unveiled a special video encapsulating the results of the ILUCIDARE project and invited the audience to “turn a new page for cultural heritage, together!”.

The playground was kicked-off with an online intervention by the Secretary General of Europa Nostra. In her powerful address, Sneška Quaedvlieg-Mihailovic expressed her appreciation for impressive results of the project, achieved thanks to the vital input from and excellent cooperation among the 8 ILUCIDARE partners. She spolitlightedt Europa Nostra’s most visible contribution to ILUCIDARE: the ILUCIDARE Special Prizes 2020 and 2021, awarded within the European Heritage Awards / Europa Nostra Awards, run in partnership with the European Commission.

“In today’s deeply trying time for Europe and the world, these success stories are a beacon of light and hope, a true inspiration and encouragement for us all. We indeed must continue building bridges, we must keep exploring and broadening our horizons, beyond and above frontiers,” added the Secretary General of Europa Nostra. She also proudly reported that the two key topics of ILUCIDARE – heritage-led innovation and international relations – have been duly mainstreamed into the revamped version of the European Heritage Awards / Europa Nostra Awards, with a view to sustain the legacy and long-lasting impact of the ILUCIDARE project. 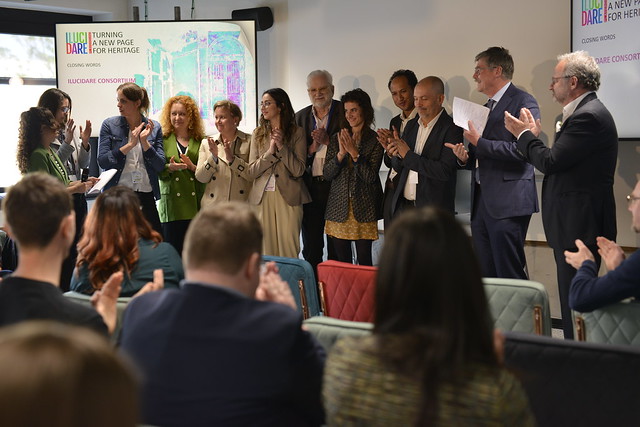 In an inspiring video message, Mariya Gabriel, European Commissioner for Innovation, Research, Culture and Youth, congratulated the ILUCIDARE Consortium for the remarkable achievements of the project, which was launched during the European Year of Cultural Heritage 2018 and funded by the Horizon 2020 framework programme of the European Union.

“The ILUCIDARE project showcases the huge potential of our cultural heritage to act as a catalyst for creativity and innovation. At a moment when we are witnesses of the aggressive Russian invasion of Ukraine, it demonstrates the capability of the heritage world to foster human solidarity and cross-country cooperation,” she added. Commissioner Gabriel also gave a comprehensive overview of the programmes and actions through which the European Commission invests in cultural heritage as a source of innovation, knowledge and creativity.

“It is absolutely important to recognise and stress the value of projects like #ILUCIDARE which are based on the 🔑key concepts of collaboration, co-creation & bottom-up approach with capacity-building for sustainable action” says Gaia Danese, Cultural Diplomacy Advisor @eu_eeas. pic.twitter.com/HCHYP824eZ

In her address, Gaia Danese, Cultural Diplomacy Advisor at European External Action Service of the European Commission, stressed the need to recognise the value and build on the learnings of projects like ILUCIDARE, which are based on the key concepts of collaboration, co-creation and capacity-building. She applauded the bottom-up approach of heritage-led international relations put forward by the project, in opposition to the outdated top-down approach of cultural diplomacy.

After the opening remarks which set the overall policy context, two inspirational speeches from heritage experts who were involved in ILUCIDARE followed.

The first inspirational speaker was Tiago Candeias, Project Manager of the “MI.MOMO.FARO” Project: Minecraft and the Modernist Architecture in Faro” and a European Heritage Youth Ambassador. Tiago Candeias addressed the resistance that innovative ideas often encounter: “At the beginning of the project, some found it hard to believe that games could be articulated in school curricula and be used to teach and learn. We have to dream. If we don’t, things don’t happen”.

The second inspirational speaker was Joe Kallas, architect and restorer, CIPA Heritage Documentation Emerging Professional and a member of the Advisory Committee of OurWorldHeritage initiative. Joe Kallas recalled the emergency interventions carried out by a group of heritage professionals and organisations on the many damaged heritage assets after the Beirut explosions of August 2020. He explained the many obstacles encountered: from lack of time and limited resources to the restrictions of the COVID-19 pandemic and security issues and how these were overcome by making the best possible use of the people and technology available. Joe Kallas ended by quoting Martin Luther King Jr, who said, “If you can’t fly then run, if you can’t run then walk, if you can’t walk then crawl, but whatever you do, you have to keep moving forward.”

A series of panel discussions followed, each one focusing on a key ILUCIDARE resource or learning outcome, and gathering diverse perspectives: from ILUCIDARE Consortium partners to members of the Advisory Board, innovators, ILUCIDARE alumni or policy-makers and other members of the ILUCIDARE Community.

The first panel benefited from the input and insights of two case studies embodying heritage-led innovation: “The Little Museum of Dublin”, winner of a European Heritage Award / Europa Nostra Award, which was presented by its Director Trevor White, and “Father and Son”, the first game ever produced by a museum, which was introduced by TuoMuseo Founder Fabio Viola. Two members of the ILUCIDARE Advisory Board, Pascal Liévaux, Chair of the JPI-CH European Joint programming initiative on Cultural Heritage, and Cécile Houpert, Project Coordinator at Eurocities, reacted to the presentations. The discussion was moderated by Heritiana Ranaivoson, Senior Researcher at Imec, and was followed by an interactive Q&A session with the on-site and online audience.

The second panel benefited from the inspiring presentations of two good practices of heritage-led international relations: “Archeology for a young future”, winner of a ILUCIDARE Special Prize in 2020, which was presented by its coordinator Hiba Qassar, and “EU-LAC Museums and Communities”, winner of the ILUCIDARE Special Prize in 2021, which was outlined by its Project Manager Jamie Allan Brown. Sanne Letschert, Head of Cultural Emergency Response of the Prince Claus Funds, and Aziliz Vandesande, ILUCIDARE Scientific Coordinator, reacted to the presentations. The discussion was moderated by Joanna Sanetra-Szeliga, Researcher at the International Cultural Centre and was followed by a lively discussion with the audience.

The third panel, entitled “The ILUCIDARE white paper on Built Heritage Documentation”, was introduced by Jimena Quijano, Research Associate at KU Leuven, and moderated by Aziliz Vandesande, ILUCIDARE Scientific Coordinator. It benefited from the inspiring contributions by Mario Santana, Professor at the Department of Civil and Environmental Engineering at Carleton University, Joe Kallas, architect and restorer, CIPA Heritage Documentation Emerging Professional and a member of the Advisory Committee of OurWorldHeritage initiative, Vincent Impens from RealVisuals, and Barbara Van der Wee from Barbara Van Der Wee Architects. The panel encapsulated the learnings of the ILUCIDARE Autumn School, which took place in Belgium last October and brought together 25 professionals from all over the world.

The very last panel of the playground focused on the “ILUCIDARE Capacity Building Methodology and Road Map”. It gathered all ILUCIDARE Consortium partners who were in charge of organising capacity-building sessions throughout the project: CHwB Kosovo, represented by Nol Binakaj, the University of Cuenca, represented by Fausto Cardoso, and the World Monuments Fund Spain, represented by Pablo Longoria. The panel was moderated by Maria Eugenia Siguencia Avila from the University of Cuenca. It brought forward the experiences and learnings of the ILUCIDARE capacity-building sessions around the world: Kosovo, Ecuador, Egypt, Ethiopia and Dominican Republic, to name a few. These were captured in the ILUCIDARE Roadmap for Capacity Building, which offers an operational toolkit to replicate this methodology in other contexts.

Celebrating the winner of the ILUCIDARE Challenge

The playground also included a celebration for “A Regenerative Museum: the Wattle and Red Earth (WARE) Collective” from Jamaica, which was selected as the winner of the ILUCIDARE Challenge. The ILUCIDARE challenge was launched last December as an international competition rewarding creative ideas and changemakers.

“A Regenerative Museum” – to be realised in the next 5 years – is potentially a model for the restoration of heritage through innovative engagement of the community and could be expanded to the restoration of derelict buildings across Jamaica. The project was presented by Georgia G.P. Love, member of the WARE collective, who invited the audience to support or collaborate with their project.

Closing by the ILUCIDARE Consortium partners

The playground was jointly closed by representatives of all 8 ILUCIDARE Consortium partners, who summarised what ILUCIDARE meant for them, both personally and professionally, in one word. The keywords put forward were “connections”, “relations”, “a lot”, “inspiration”, “community”, “potential”, “cooperation”,

What #ILUCIDARE means for you?
Connection; cultivate relations; a lot; inspiration; community; potential; cooperation; friendship; innovation; adventure; youth; trust. These were the answers of @ilucidare partners to the question by host @Dianel_Aldana at the end of today’s event pic.twitter.com/6WTRpqM1ke

The conference was followed by a lively reception where participants, speakers and partners could raise a glass for the great ILUCIDARE journey.

ILUCIDARE, a three-year project funded by the EU framework programme for research and innovation Horizon 2020, was completed in April 2022. Its main goal was to promote and leverage on cultural heritage as a key resource for innovation and international relations, through the following actions: 1) research and mapping; 2) capacity-building and knowledge-sharing; 3) awareness-raising and rewarding best practices; 4) creation and activation of an international community. It had a total budget of EUR 2, 869 290.00 and brought together the expertise, knowledge and networks of 8 Consortium partners from Europe and beyond, including Europa Nostra and two Europa Nostra members: KU Leuven (Belgium) and the International Cultural Centre (Poland). Other Consortium members were KEA European Affairs (Belgium), World Monuments Fund (Spain), Cultural Heritage Without Borders (Kosovo), Universidad de Cuenca (Ecuador) and Imec (Belgium).