What future for Our Europe? And how can civil society organisations mobilise citizens to shape the positive future of Europe and participate in the European elections 2019? These were just some of the lead questions that representatives of civil society organisations, including Europa Nostra, and high-level EU representatives discussed at the high profile event “Civil Society for rEUnaissance” on 21 February in Brussels. It was organised by the European Economic and Social Committee (EESC) and aimed at mobilising civil society at all levels in the run-up to the European elections which will take place on 23-26 May 2019 across EU Member States. Europa Nostra contributed to the important discussions held throughout the day and was present in a large delegation, having a prominent role and visibility at his high profile European event.

EESC President Luca Jahier opened the event with a very inspiring and engaging speech. He among others applauded the courage and determination of 16-year old climate activist Greta Thunberg, who was the youngest one among the inspirational speakers. She made a passionate plea for a more resolute action fighting climate change on behalf of her generation.

After her forceful intervention, a written message from European Parliament President Antonio Tajani was delivered. European Commission President Jean-Claude Juncker also addressed the audience acknowledging the commitment and impact that young people inspired by Greta Thunberg are having: “I am glad to see that young people are taking to the streets in Europe to raise visibility of the issue of climate change.
Their movement has spread to many cities and can bring about change.
Our goal is to allocate ¼ of the EU budget to climate change mitigation.” The President of the European Committee of the Regions, Karl-Heinz Lambertz, who had also been a prominent speaker at European Cultural Heritage Summit in Berlin in June last year, stressed the key role of regions and cities for shaping the future of Europe (including with regard to climate action). President Lambertz also pointed to the upcoming 8th European Summit of Regions and Cities in Bucharest, Romania, on 14-15 March, which will be the largest political gathering of European mayors and elected local and regional representatives this year, thus constituting a key moment to deliver their message for the future of Europe, and in which President Jahier will also participate. Europa Nostra will also be represented at this Summit by its Vice-President, Piet Jaspaert. 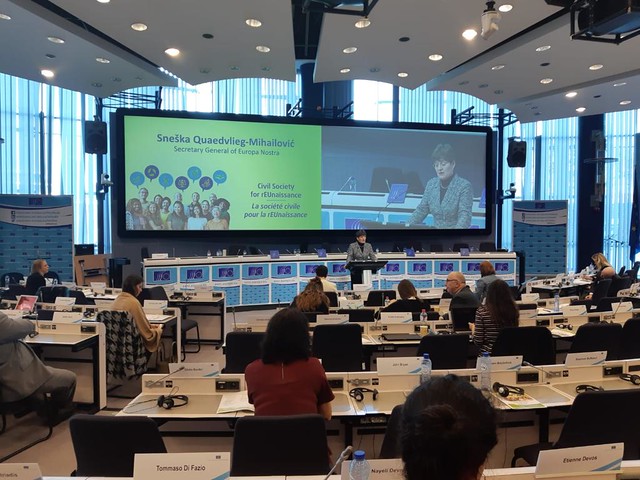 Europa Nostra’s Secretary General Sneška Quaedvlieg-Mihailović was one of 5 inspirational speakers representing civil society movements, alongside Eva Maydell, President of the European Movement International – of which Europa Nostra is a member -, Guillaume Klossa, CIVICO Co-President – an initiative that Europa Nostra supports – , Anna Widegren, Secretary General of the European Youth Forum and Madeleina Kay, aka EU Super Girl . In her speech, she emphasised that Europe has always been a peace project, a value-driven project and a cultural project. “Culture and cultural heritage are not only a source of beauty,inspiration and creativity; they are also a positive and

cohesive force for the future of Europe and its citizens. They also must be recognised as vital drivers of Europe’s sustainable development agenda.”

She concluded her speech by calling on all (future) EU leaders “to place culture and education very high on the list of horizontal priorities of the European Union.” Why? “Because investment in culture and education is investment in the most important resource of Europe – its human capital! Only in this way shall we indeed increase the chances for Europe’s true renaissance”, concluded the Secretary General of Europa Nostra.

Her intervention was preceded by a most inspiring artistic performance of #Euphonìa: this musical and dance performance was created by artist Valentina Volpe Andreazza and her team as a contribution to Europa Nostra’s #Ode2Joy challenge during the European Year of Cultural Heritage in 2018. As it was now performed live for the first time, it almost symbolically underlined Europa Nostra’s on-going call to “change the narrative about Europe”.

🎶 Time for a musical intervention: #Ode2Joy Challenge contribution “Euphonia” performed live for the 1st time at @EU_EESC event on #EUcivilsociety for #rEUnaissance by a team of creative artists from #Italy!
Ready to take up the challenge? More info: https://t.co/HoDCdfS1Nh pic.twitter.com/A3qDq8llXB

In the afternoon, Europa Nostra’s Secretary General acted as the rapporteur of a roundtable discussion on the role of peace and culture for the future of Europe which was chaired by EESC member Jane Morrice from the UK (Northern Ireland). After a lively brainstorming, Sneška Quaedvlieg-Mihailović – who was the only civil society representative to act as rapporteur – presented the main ideas and recommendations to the closing plenary session, alongside the outcomes of six other roundtables which had taken place simultaneously. She stressed in particular three recommendations from her panel: 1) investing more in symbolic projects for a positive and cohesive narrative about Europe; 2) investing more resources in peace-building through culture when it comes to the EU’s external relations and 3) including among future membership of EESC representatives from civil society organisations active in the field of culture.

To find out more