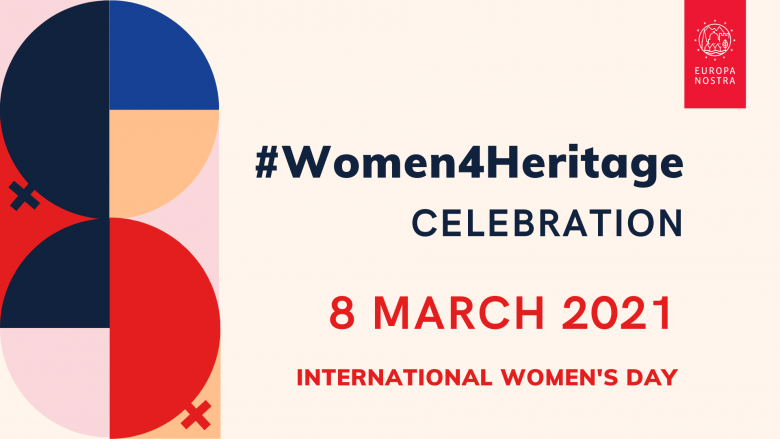 On 8 March, Europa Nostra hosted the #Women4Heritage virtual event on the occasion of International Women’s Day. The aim of this event was to gather and pay tribute to women who dedicate their lives to the protection and enhancement of cultural heritage in Europe and beyond. Over 85 women from across 3 generations shared their personal stories and experiences, and celebrated their achievements in an intimate and inspiring atmosphere. Among the participants were representatives from civil society organisations and institutions at all levels, as well as heritage professionals, volunteers and students. After 3 hours of engaging exchanges, this special event culminated with the launch of the #Women4Heritage Network, an informal network without borders, aiming to stimulate and facilitate an exchange of ideas and opportunities between women in the heritage field to build a more sustainable and peaceful future together.

Inspired by the 3 generations of 85 incredible women who joined our #Women4Heritage celebration today! Thank you for being a leading example in your expertise, a role model in your community, an innovator for the society!🙌#Together we can move mountains for #CulturalHeritage! pic.twitter.com/nQFYzOSCxY

Among the special invitees who shared their inspiring personal stories were Themis Christophidou, Director-General for Education, Youth, Sport and Culture of the European Commission; Androulla Vassiliou, Vice-President of Europa Nostra and former European Commissioner for Culture; Dana Firas, H.R.H. Princess of Jordan; Mechtild Rössler, Director of the UNESCO World Heritage Centre; Irina Bokova, former UNESCO Director General; and Bettany Hughes, historian, broadcaster and Laureate of the Helena Vaz da Silva European Award 2018. Marin Alsop, the world’s top female orchestra conductor, also joined briefly to convey her greetings to all women present. In addition, many other women shared their messages and testimonials with the rest of the group during a “Journey through Europe”, a way for participants to introduce themselves, their passion and work for cultural heritage.

Sneška Quaedvlieg-Mihailović, Secretary General of Europa Nostra, moderated the event and began by warmly welcoming the attendees. She noted, “three generations of women are gathered for a true intergenerational dialogue of Women for Heritage,”. She then gave the floor to prominent and inspiring women, who shared their passion and dedication to cultural heritage.

Themis Christophidou, Director-General for Education, Youth, Sport and Culture of the European Commission, set the tone of the event, stating that “everyday should be women’s day”. She recalled fond and touching memories of her mother, who was her mentor, and praised her leadership, “women didn’t have many rights back then, but she was a fighter” she said.

Androulla Vassiliou, Vice-President of Europa Nostra, former European Commissioner for Education, Culture, Multilingualism and Youth, and a role model for many, condemned all sorts of discrimation that women are still facing, including in the heritage field. “We cannot be satisfied unless we succeed in eliminating violence against women. And I am referring to physical, sexual, psychological, or economic violence which is still prevalent not only in developing countries but also in the so called civilized world.” noted Androulla Vassiliou.

Irina Bokova, former UNESCO Director General, stressed the severe consequences of the COVID-19 pandemic for gender equality, sustainable development and, especially, cultural heritage. Advocating the need for renewal with a sense of European identity in order to counter the rise of populism, she also strongly encouraged the creation of the #Women4Heritage Network to extend our collective mission to a wider community. “History, heritage and women: this should be our message,” she emphasised.

Marianne Roald Ytterdal, Council Member of Europa Nostra, highlighted the importance of the community in the heritage field, calling on all of us to “live not for oneself, but for once, for the community”.

Sorina Neacsu, Coordinator of the European Heritage Youth Ambassadors Programme, shared her perspective as a young woman working in the cultural heritage field. She stated that she felt privileged as it is a field which attracts an increasing number of young women who are given meaningful opportunities.

During a “Journey through Europe”, all attendees from across the continent and beyond could introduce themselves and share their experiences.
This journey was enriched by the powerful testimonies of H.R.H. Princess of Jordan Dana Firas; Mechtild Rössler, Director of the UNESCO World Heritage Centre; Marin Alsop, the world’s top female orchestra conductor; and Alexandra Mitsotaki, Co-founder and President of the World Human Forum and Vice-Chair of the Greek Cultural Centre in Paris. 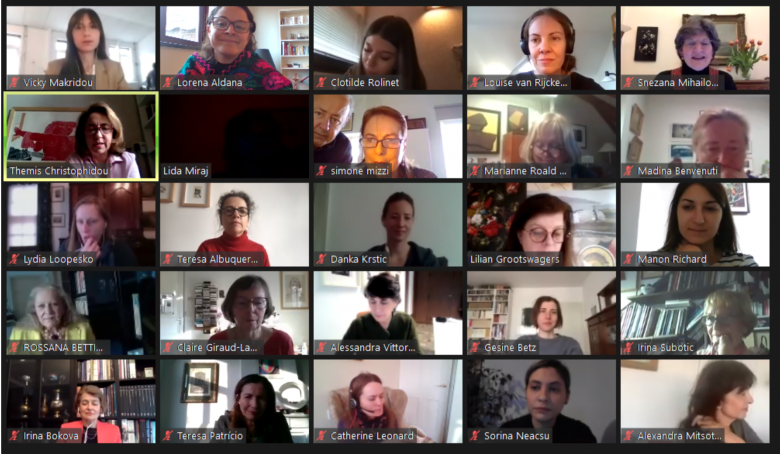 Hermann Parzinger, Executive President of Europa Nostra, briefly joined the event to greet all these extraordinary women and thanked them – on behalf of the “Men4Heritage” – for being heritage heroes and guardian angels of our shared cultural heritage.

This special event culminated with the launch of an informal virtual network of #Women4Heritage. The aim of such a network is to bring together female heritage professionals and volunteers from across Europe and the world to exchange information, share ideas and opportunities, create new partnerships, inspire other women and have a more powerful voice together. As a first concrete step, immediately after the gathering, Europa Nostra created a dedicated LinkedIn group and invited all participants to join. As of 18 March, the group already has over 64 members.

Europa Nostra’s ambition is to bring the #Women4Heritage informal network to life, building on the positive energy and constructive ideas discussed during the virtual event on 8 March.

The sorority and pleasant atmosphere allowed the participants to go further and think of the future of European culture to contribute to a more sustainable and cohesive society. They demonstrated that, by joining forces, women across generations can dream big and achieve more for heritage together. They demonstrated, once again, to be United in Diversity as well as United in Adversity.

On this #InternationalWomensDay, with all my love & gratitude to so many female colleagues & friends across Europe & beyond!
We are such a formidable force for good! 🌷🤝🌷 https://t.co/ple0db6eKR