On 25-26 January, the European Commission’s Directorate General for Education, Youth, Sport and Culture (DG EAC) organised a most interesting workshop on complementary funding sources for cultural heritage. Taking place in the frame of the Portuguese Presidency of the EU, the two-day virtual event gathered representatives of the EU Member States, members of the European Commission Expert Group on Cultural Heritage and numerous heritage stakeholders. Two representatives of Europa Nostra, namely our Executive Vice-President Guy Clausse and our Secretary General Sneska Quaedvlieg-Mihailovic participated in the workshop, alongside many of Europa Nostra’s valuable members and partners.

In her welcome address, Catherine Magnant, Deputy Director, Head of Unit on Cultural Policies, DG EAC, highlighted that the COVID-19 crisis, which is taking a considerable toll on the cultural heritage world, revealed the urgent need to find and facilitate access to funding sources that complement the available public support (at EU, national, regional or local levels). Thus, the workshop aimed at identifying these funding sources and transferable best practices in order to promote the economic sustainability of cultural heritage.

As a member of the European Commission Expert Group on Cultural Heritage, Europa Nostra was invited to provide extensive input to the Background Paper on Complementary Funding for Cultural Heritage prepared by DG EAC’s, which served as a basis for the workshop’s programme. Europa Nostra used this opportunity to launch a wide consultation on funding best practices among its members, which represent a large constituency of highly qualified experts from the wider heritage field across Europe and beyond.

Delighted to have participated in the most interesting Workshop on “Complementary funding sources for #CulturalHeritage” organised by #DGEAC @EU_Commission on 25-26 Jan. Let us promote & encourage innovative, mixed & public-private funding models to preserve our shared heritage! pic.twitter.com/h0HGYQaApX

Francisco de Paula Coelho, Dean of the European Investment Bank Institute, kicked off the rich programme with an inspiring speech on “How to make cultural heritage interesting for private investors”. He shared insights based on two significant experiences. Firstly, that of the EIB Group as one of the financiers of many important European urban projects involving cultural heritage sites; and, secondly, the experience of the EIB Institute as a partner of Europa Nostra in the 7 Most Endangered Programme which aims to safeguard cultural heritage sites at risk in Europe.

The Dean of the European Investment Bank Institute emphasised the importance of facilitating and improving cooperation and dialogue between the private sector and cultural heritage. He stated: “The solution lies not in choosing private funding over public funding but in mixing both. There is not enough public money available to safeguard, renovate and maintain the infinite variety of cultural heritage sites in Europe. So it is not a question of whether private investors should be involved but how should they get involved?” To illustrate his argument, Francisco de Paula Coelho mentioned public and private mixed funding for successful commercial reuse of cultural heritage sites, which can save them from ruin and give them a second life.

In reaction, Sneska Quaedvlieg-Mihailovic, Secretary General of Europa Nostra, highlighted the last recommendation of the Dean of the EIB Institute to involve private investors in the discussion and the need to find adequate funding for civil society organisations that are raising the profile of heritage projects. She particularly suggested that the European Commission could provide tools to develop a necessary interface between heritage projects and investors.

André Wilkens, Director of the European Cultural Foundation, gave an introductory speech on philanthropy and the role of foundations. He advocated for “Philanthropy with a European purpose” as a response to the unprecedented COVID-19 crisis. As demonstrated in the study ‘Imagine Philanthropy for Europe’, published by the European Cultural Foundation and the Allianz Kulturstiftung for Europe, philanthropic organisations can foster a sense of European solidarity and belonging, including at the local level. Thus, the pandemic also offers the opportunity to develop much-needed new forms of public-philanthropic partnerships, including a legal framework for European philanthropy.

Promising start of the new teleworking week! Many thanks to @EU_Commission DG EAC & its Deputy Director #CatherineMagnant with her team for hosting an online gatheting on a crucial & very timely topic: the complimentary sources of funding for #culturalheritage! #EuropeForCulture pic.twitter.com/mbeXUwTBez

The presentations were then split according to the following funding instruments: 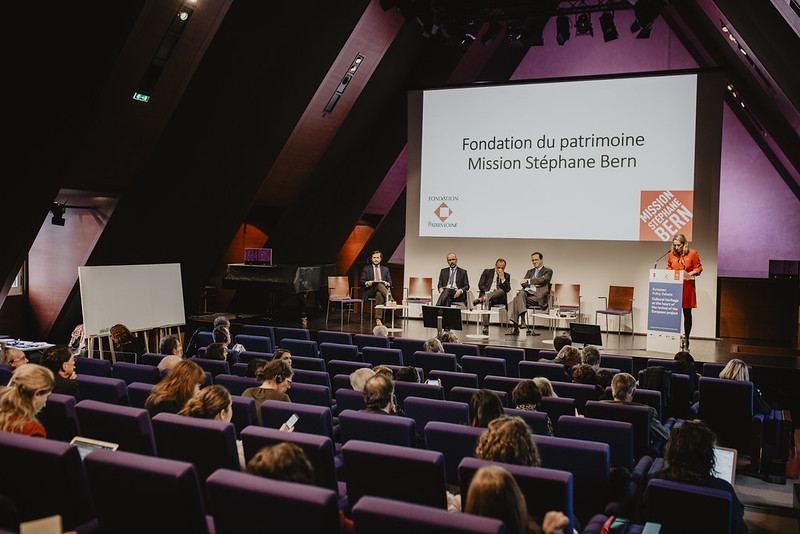 The French lottery scheme for cultural heritage, which was inspired by The National Lottery Heritage Fund (UK), is seen as a new source of funding and has accelerated heritage preservation in France. Out of 4,000 sites listed since 2018, 509 endangered sites will benefit from the lottery funds and 230 have already been saved. Among these sites is the iconic Villa Viardot in Bougival in France, which will host the future European Music Centre, an innovative and transdisciplinary project that received the high patronage of Europa Nostra. The restoration works of the Villa Viardot were launched in October 2019 during our European Cultural Heritage Summit. The Loto du Patrimoine is also a participatory initiative that involves citizens in the selection of the sites, who then feel responsible for their preservation. A positive impact was particularly visible in rural areas, with the creation of local jobs and revenues for SMEs, as well as the organisation of training to acquire specialised skills.

Finally, two EU-funded projects working on financing for cultural heritage shared the results of their research and their case studies: