Productive and fruitful meetings of Europa Nostra’s Board, Council and General Assembly were held during the European Heritage Congress 2016 which took place in Madrid from 22-27 May.

On 22 May, the Board met to discuss various issues, including the final preparations of the Madrid Congress with Araceli Pereda Alonso, President of Hispania Nostra. 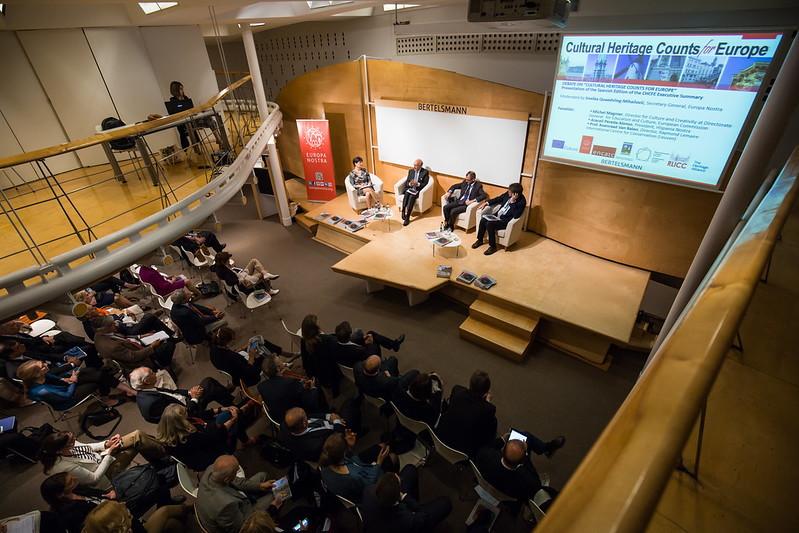 For the third year, Michel Magnier, Director Culture and Creativity of the DG Education and Culture of the European Commission, joined the internal session of the Council meeting for a fruitful exchange of views with a special focus on the proposed European Year of Cultural Heritage 2018.

The public session of the Council meeting consisted of a debate on the European cooperation project ‘Cultural Heritage Counts for Europe’ on the occasion of the presentation of the Spanish edition of the CHCFE Executive Summary, which was produced with the kind support of Hispania Nostra, the Spanish Ministry of Culture and Bertelsmann, a corporate partner of Europa Nostra.

Michel Magnier, Prof. Koenraad Van Balen, Director of the Raymond Lemaire International Centre for Conservation at the University of Leuven (Belgium) – a CHCFE project partner, and José Maria Ballester, Director of the Rural Development Area of the Botin Foundation and Council member of Europa Nostra, were the main speakers at the debate, which was moderated by Sneška Quaedvlieg-Mihailović, Secretary General of Europa Nostra.

Prof. Van Balen presented the main outcomes and strategic recommendations of the CHCFE project. Magnier stressed the importance of this research project at the European level, while Ballester emphasised its relevance at the national level. A lively debate with the participants took then place on the CHCFE project and on the proposed European Year for Cultural Heritage 2018. Michel Magnier invited Europa Nostra and civil society organisations active in the field of heritage to take ownership of the Year and to get closely involved in its organisation.

The General Assembly of Europa Nostra was held on 26 May at the Conde Duque Cultural Centre. The internal session was dedicated to statutory matters: the approval of the Annual Report for 2015, the approval of the preliminary Budget for 2017 and various new (re)appointments to the governing bodies of Europa Nostra. Costa Carras, Vice-President of Europa Nostra, paid a posthumous tribute to Prof. Khaled El-Assaad, the former principal custodian of the World Heritage site of Palmyra, who was brutally murdered by Islamic State militants in August 2015 because he refused to reveal where valuable artefacts had been moved for safekeeping.

Two Memorandums of Understanding were signed with organisations taking the role of Europa Nostra’s Country Representations in their respective country: Hispania Nostra in Spain and the Georgian Arts and Culture Centre in Georgia.

The General Assembly closed with the public presentation of the ‘Madrid Manifesto’, based on the Conclusions of the full-day Forum on ‘Social Participation in Heritage Protection: Spanish, European and Hispano-American Experiences’ held the day before. This presentation was made by Araceli Pereda Alonso, President of Hispania Nostra, in presence of the Mayor of Madrid, Manuela Carmena.