How are civil society, national coordinators and EU institutions preparing for the European Year of Cultural Heritage 2018? This was addressed during the public debate “European Year of Cultural Heritage 2018: A Challenge for All” at Europa Nostra’s General Assembly on 12 May 2017 in Turku, Finland. Moderator Sneška Quaedvlieg-Mihailović, Secretary General of Europa Nostra, welcomed Finnish Minister for Housing, Energy and the Environment Kimmo Tiilikainen for the opening address. The panel comprised two national coordinators for the European Year – Professor Jacek Purchla from Poland, also Chairperson of the upcoming 41st session of the UNESCO World Heritage Committee and Council member of Europa Nostra, and Uwe Koch from Germany, Head of the German Cultural Heritage Committee DNK, – as well as Michel Magnier, Director for Culture and Creativity at the Directorate-General for Education, Youth, Sport and Culture who was representing the European Commission, and Simone Mizzi, former Executive President of Maltese heritage NGO Din l-Art Helwa and Board member of Europa Nostra who represented civil society. As the European Year of Cultural Heritage 2018 had finally been formally adopted the previous day at EU level, the debate was particularly timely. 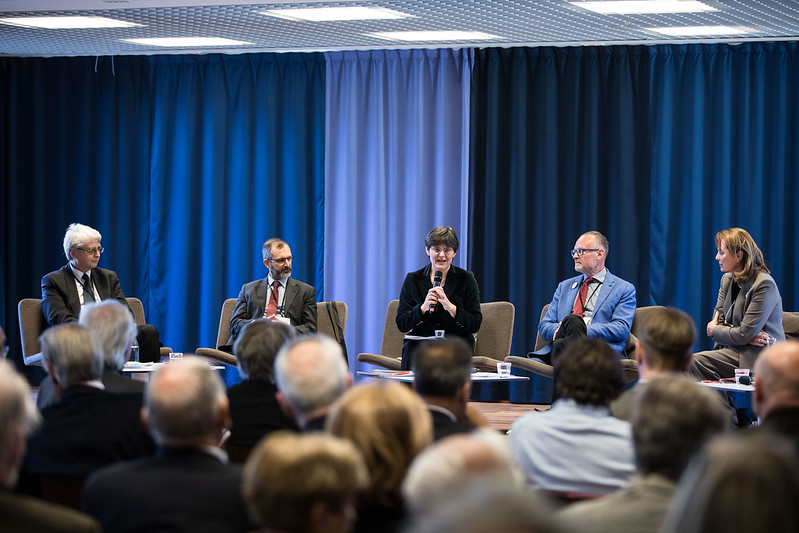 In his opening address, Minister Kimmo Tiilikainen – who had just returned from planting memory trees to mark Finland’s 100th anniversary of independence – presented the activities for the centenary celebrations whose theme “Together” links in well with the European Year of Cultural Heritage. He welcomed the adoption of the European Year and referred to the Forum ‘Sharing Heritage – Citizens participating in decision-making’, organised by Europa Nostra Finland the previous day, stressing the importance of participation and inclusion. With children and young people being the main target group for the Year in Finland, Minister Tiilikainen said it would be “very interesting to see what young people think about the art of sharing”. The Minister thanked Europa Nostra, its country representation Europa Nostra Finland, the University of Turku and all the participating organisations and volunteers. 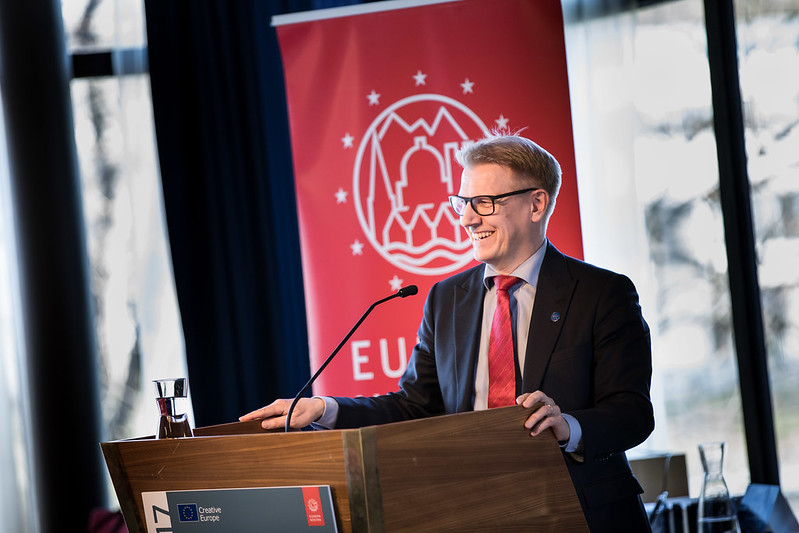 Sneška Quaedvlieg-Mihailović presented Minister Tiilikainen with a copy of Europa Nostra’s magazine ‘Heritage in Action: Finland Special’, which also features many community projects. On this occasion, the Finnish edition of the “Cultural Heritage Counts for Europe” Executive Summary was launched. Benito Casagrande, Vice-President of Europa Nostra Finland, presented a copy to the Minister.

The debate on the European Year of Cultural Heritage was opened by Uwe Koch from the German Cultural Heritage Committee (DNK) who will be one of the hosts of the 2018 European Heritage Summit organised by Europa Nostra together with its member organisation the Prussian Cultural Heritage Foundation (SPK). Uwe Koch thanked Europa Nostra and Sneška Quaedvlieg-Mihailović for their support for the idea of a European Year which required intensive joint lobbying efforts on their part: “We are proud of the success that we achieved together.” He stated that the Year provides many opportunities to develop long-term initiatives across Europe and emphasised that “cultural heritage tells us much about our European identity”. 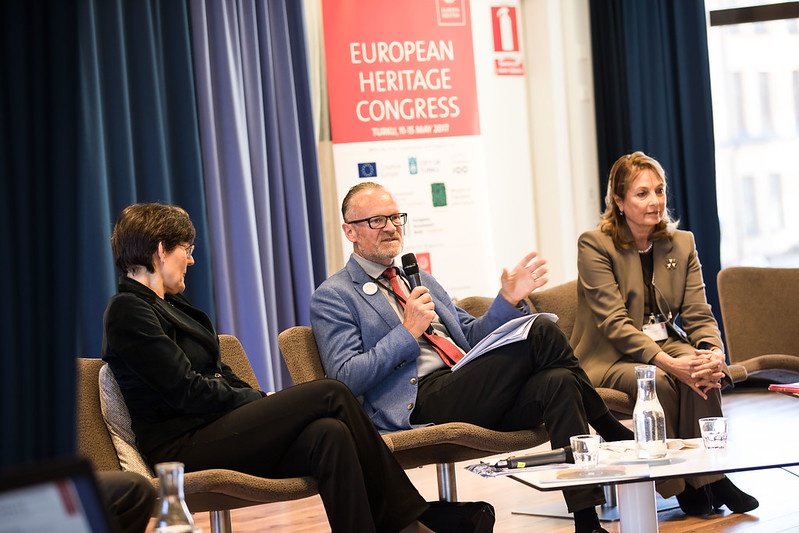 Likewise, Michel Magnier, whose Directorate has now established a taskforce for the European Year, commented on the sudden success and positive momentum the decision to hold a European Year has created: “Everybody seems to want to work together.” He confessed he was struck by the fact that all the different stakeholders seemed to be on the same line. By way of example, he referred to the first meeting of the national coordinators where participants immediately agreed on the principles. The European Commission was very pleased with the way the European Year was implemented. He admitted that, of course, there was still room for improvement and the particular challenge remained to make the Year “special and a success”: “The key is to reach people, not only experts”, he added. Referring back to the opening address of Minister Tiilikainen, Michel Magnier agreed with the importance of history and citizens’ participation for the Year. While the European dimension has to be strong, activities should not only take place at European level – quite the contrary, it was important that all partners were actively involved, including at local level, in cities and in regions. 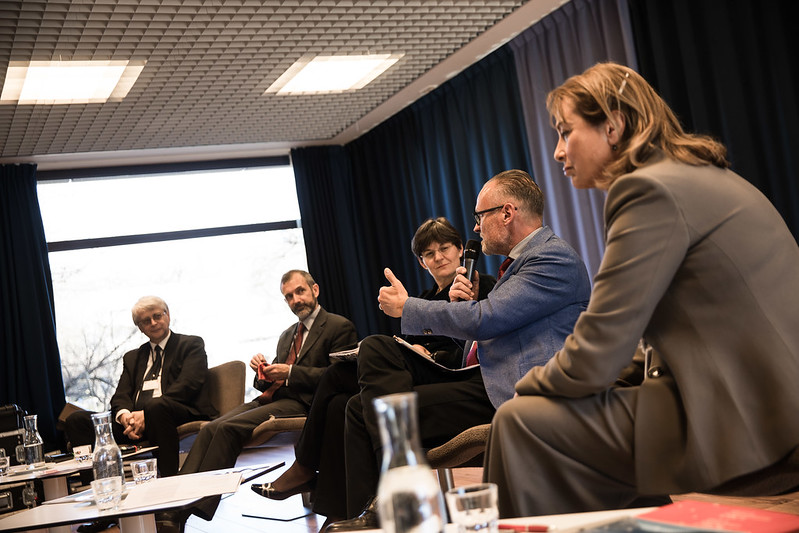 For bridging this gap between the local and the European level, Head of German Cultural Heritage Committee Uwe Koch stressed it was vital “to give young people the chance to experience the European dimension at local level”. In Germany preparations are advancing well as DNK was one of the most active advocates for the Year. DNK had recently launched a call for participation which had been signed by more than 60 institutions on the same day – at this stage, more than 100 organisations have signed the call as a sign of support to the European Year whose theme in Germany is “Sharing Heritage”. Uwe Koch considered this as an encouraging sign that the Year had the power to bring people together.

In Poland, Europa Nostra’s Associate Organisation, the International Cultural Centre in Krakòw, led by Professor Purchla, is coordinating the European Year. Like his co-panellists, he stressed the importance of civil society for the Year and of awareness-raising, particularly at local level. Drawing on the complex history of the city of Wroclaw (formerly German Breslau), Professor Purchla illustrated the challenge of sharing heritage: the city had seen a complete exchange of population after the Second World War with the expulsion of the German inhabitants and the arrival of Poles who in turn had been forced to leave the Eastern Polish territories around Lwòw (Lviv). How heritage was considered by the new inhabitants changed: from the heritage of the enemy after the war, to the heritage of the stranger in the 1970s, to eventually the heritage of the neighbour in the 1980s – it was now considered as shared heritage. The Europa Nostra Council member who had also been closely involved in the project and the report, “Cultural Heritage Counts for Europe”, criticised the EU decision-makers who had long ignored heritage as a driving force for local development and voiced his conviction that this needed to be redressed. Moderator Sneška Quaedvlieg-Mihailović also pointed out the need to highlight to a greater extent the power of cultural heritage to build bridges among people. 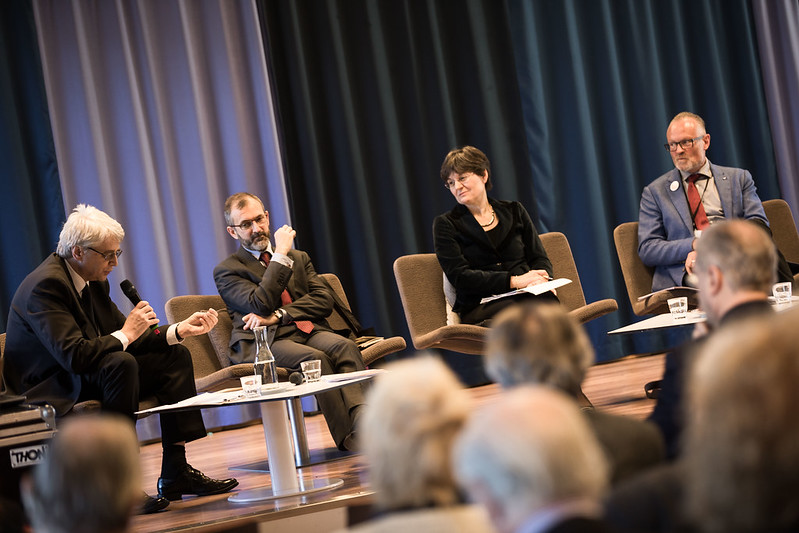 After this first exchange, Simone Mizzi, former Executive President of Din l-Art Helwa – one of the oldest member organisations of Europa Nostra -, gave a presentation on how Malta – whose capital Valletta is the European Capital of Culture 2018 – is preparing for the Year and how EU funding and support had contributed to restoring the palaces and fortresses on the Maltese islands. She particularly stressed the importance of this European support for local communities as it showed “that Europeans in one country have the power to bring change in another country”. With regard to the European Year, she presented examples of projects to the audience that local members of Europa Nostra are undertaking and preparing. 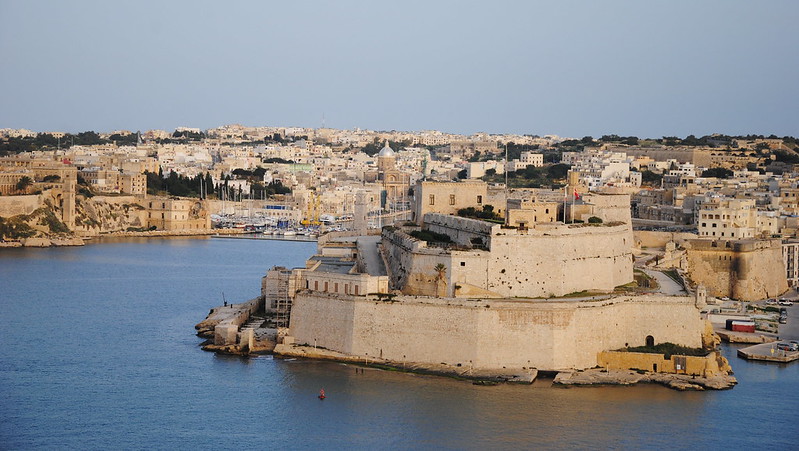 In response to what exactly the European Commission was planning for the Year, Director for Culture and Creativity Michel Magnier referred to the 10 initiatives that had been developed by the institution for the European Year. One important project to be pursued was the re-use of heritage, buildings or sites that had lost their original function. He stressed that there were many example of good practice which needed to be shared more widely across Europe, citing the example of a church that had been converted into a skateboard park, which is in fact an example of best practice shared by European Heritage Alliance 3.3 member, Future for Religious Heritage. Another issue was the reconstruction of destroyed heritage, such as the Berliner Stadtschloss in Germany or the re-building of Greek temples, referring to just one of the topics to be addressed during the European Year at EU level. In response to the initiatives outlined by Michel Magnier, moderator Sneška Quaedvlieg-Mihailović added that Europa Nostra members were preparing a proposal for a conference on the adaptive re-use of heritage to take place in early 2018 in Athens and also encouraged the audience to use the time during the European Heritage Congress 2017 to network and exchange ideas and projects for the European Year of Cultural Heritage.

In his closing statement, Professor Purchla pointed out that heritage was not only a matter of reconstruction but also of memory: “Heritage is our choice, our memory”. Inviting audience and speakers to the first ever European Heritage Summit, Uwe Koch from hosting organisation German Cultural Heritage Committee called on Europa Nostra members to use existing formats of exchange and initiatives, such as the UNESCO World Heritage Committee, the European Heritage Label or European Cultural Routes, when organising the European Year of Cultural Heritage. Echoing these words and by way of closing the public debate, Europa Nostra’s Secretary General Sneška Quaedvlieg-Mihailović summarised how to make the Year a success: “Sharing heritage, sharing values and sharing our dedication for Europe.”

This debate built on previous public debates and exchanges such as during the European Heritage Congress in Madrid in May 2016 and Europa Nostra’s Council meeting in Leipzig at the denkmal fair in November 2016.