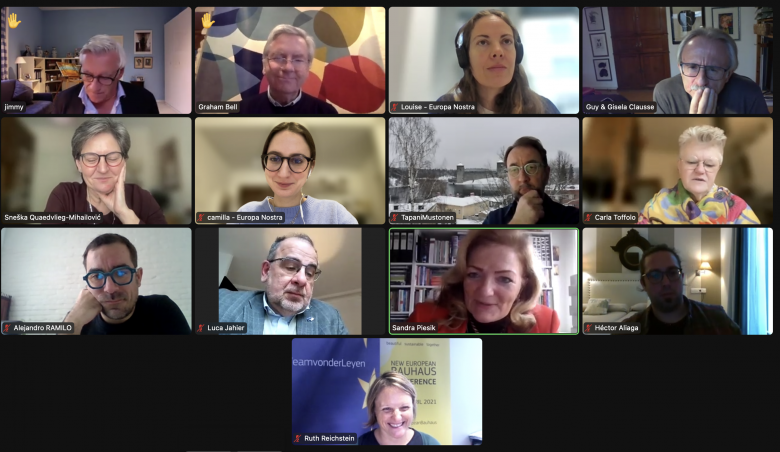 The Secretary General of Europa Nostra, Sneška Quaedvlieg-Mihailovic, moderated the meeting. She mentioned  the most important outcomes of the NEB initiative since the first meeting of the Taskforce in February 2022, including the support of the initiative by all EU Institutions and the adoption of the Opinion of the European and Social Committee on 23 February, the Opinion of the Committee of the Regions on 27 April and the Resolution of the European Parliament on 14 September. All of these three documents received substantial input from Europa Nostra.

She also recalled the involvement of Europa Nostra in the NEB Labelling Strategy and our active participation in the NEB Festival held from 9 to 12 June in Brussels and online. As s an official partner of the New European Bauhaus initiative, Europa Nostra organised its own side event entitled “Fostering Peace & Solidarity, Beauty & Sustainability, as core values of the New European Bauhaus” at the Brussels Town Hall, and  contributed to 3 sessions as part of the Forum at Gare Maritime and to 2 side events organised as part of the Festival.

Last but not least, she stressed the importance of the launch – on 24 November 2022 – by EC President, Ursula von der Leyen, of the New European Bauhaus Academy for sustainable construction.

An introductory tour de table of all Taskforce members was followed by an exchange of views with Ruth Reichstein on the state of the NEB initiative at European level. Mrs Reichstein stressed that the NEB initiative is a project of hope and perspective and is even more needed in these times of stress and conflict, which include the energy crisis and the pressure on our fundamental values which are at the basis of the entire European project.

Jimmy Jamar, Head of the Europa Nostra Brussels Office, noted: “Strong messages were expressed by the Taskforce participants setting the stage for further co-creation opportunities, between architects, artists, urban planners and heritage specialists, with clear focus on the implementation of the European Green Deal”.

After the meeting and following her participation in the online Workshop: “Making Beauty stronger” organised by the European Commission on 12 December, Sneška Quaedvlieg-Mihailovic proposed that the next policy paper of the NEB Taskforce focuses on the “beauty” dimension of the NEB and that it demonstrates the fundamental link between beauty and the two other pillars of the NEB: the notion of sustainability and the notion of inclusiveness/togetherness.

The activities of our NEB Taskforce are supported by the Creative Europe programme of the European Union through our Network project European Cultural Heritage Agora: “Empowering Europe’s Civil Society Movement for Heritage” (2022-2024).