This special event consisted of two parts; a debate on the contribution of cultural heritage to the core ideals of the New European Bauhaus and a concert in solidarity with the people and culture of Ukraine. It was attended by some 200 participants from civil society, the EU Institutions and the Belgian, Ukrainian and international communities. It featured high-level speakers including H.E. Oleh Shamshur, Ambassador of Ukraine, Themis Christophidou, Director-General for Education, Youth, Sport and Culture, European Commission, Philippe Close, Mayor of Brussels as well as MEPs Iskra Mihaylova (Renew Europe, Bulgaria) and Marcos Ros Sempere (S&D, Spain).

The debate focused on the key role of cultural heritage in shaping more sustainable and cohesive societies with due understanding and respect for the “spirit of the place” of their living environment, both urban or rural. It was moderated by Sneška Quaedvlieg-Mihailović, Secretary General of Europa Nostra, and gathered experts and high-level representatives from civil society, the EU Institutions and young heritage professionals.

In her introductory remarks, Sneška Quaedvlieg-Mihailović applauded the New European Bauhaus as an initiative and movement “which gives a much-needed soul and cultural dimension to the European Green Deal” and called for the values of Peace and Solidarity to be duly included in the NEB.

The first panel entitled “Putting Europe’s shared heritage at the heart of Europe’s green transformation” engaged four experts who shared their views on this timely and relevant topic. Bruno Rossignol, Head of Programme for Climate and Heritage at the European Investment Bank Institute (EIBI), outlined how the EIB – the EU’s “climate bank” – is committed to supporting the much-needed green transformation of our societies. He referred to the European Cultural Heritage Green Paper – produced by Europa Nostra in cooperation with ICOMOS, the Climate Heritage Network and with the support of the EIB Institute -, which demonstrates the key contribution of cultural heritage to achieve the goals of the European Green Deal. He also reaffirmed the commitment of the EIB towards heritage at risk, including among others by supporting the 7 Most Endangered Programme launched in 2013 and run by Europa Nostra.

Andrew Potts, Coordinator of the Climate Heritage Network and lead author of the European Cultural Heritage Green Paper further stressed the power of culture and cultural heritage to advance the ecological transition by “helping people imagine and realising a climate-resilient, post-carbon future”, which is precisely the motto of the Climate Heritage Network Action Plan 2022-2024. He also called on all cultural and heritage actors to further highlight the vital role of cultural heritage – from built heritage to traditional knowledge – for the green transition and to become ambassadors of culture-based climate action.

MEP Iskra Mihaylova (Renew Europe, Bulgaria) welcomed the New European Bauhaus as the much-needed “soul” of the European Green Deal and emphasised the importance of engaging as many stakeholders as possible, including the cultural heritage community, civil society organisations, municipalities, universities and businesses, in particular the youth, to advance the green transformation and achieve its ambitions.

Antigoni Michael, European Heritage Youth Ambassador of Europa Nostra / ESACH / European Heritage Tribune, used the frozen conflict zone of Cyprus as a case study for Europe’s green transition. She provided examples of how the youth is mobilising to create and develop sustainable projects and emphasised the need for more cross-sectorial, intergenerational, cross-border and systematic collaboration.

The second panel was entitled “Beauty as a public good – the role of cultural heritage to rediscover the sense of a place and strengthen the sense of belonging to a wider European community”. Jorge Chaminé, Founding President of the European Music Centre, recalled that “music is in everything” and referred to the creation of the Network of Houses and Museums of European Musicians, supported by Europa Nostra, which already counts 40 places in 20 European countries. As regards the European Music Centre, the building of which is in progress, he recalled that “architecture is about social, environmental and economical sustainability”.

Vadim Kononenko, Expert – Foresight and Policy at the European Environment Agency, highlighted beauty – one of the three core principles of the New European Bauhaus – as much more than a visual concept or architectural style. “[Beauty] is rather a social and human value, as much as creativity, culture, heritage and education. This is why beauty should be recognised as a public good and should be equally accessible to all,” he said.

Luca Jahier, former President of the European Economic and Social Committee, recognised the importance of the cultural dimension of the European Green Deal. As an initiative shaping the future of Europe, he also called on citizens to “become drivers of change and pioneers in a new adventure to build a common vision for the Europe of tomorrow”.

Catherine Magnant, Head of Unit, Cultural Policy, DG Education and Culture European Commission, reminded that speaking about beauty was an innovation as well as a challenge for EU Institutions “because beauty is subjective, place-bounded and not measurable. But it moves us, it fosters emotion and sense of belonging: it puts a human face to the European Green Deal“.

Reactions to the debates were provided by MEP Marcos Ros (S&D, Spain), Founder of the European Parliament’s NEB Friendship Group and co-rapporteur of the report on the New European Bauhaus and Petros Fassoulas, Secretary General of the European Movement International. In his reaction, MEP Marcos Ros recalled the aims of the NEB, just like the historical movement, to improve people’s lives, putting culture, architecture, design, and urban planning at the service of society. However, “The NEB has done something unprecedented: it has put BEAUTY at the centre of EU policies. Beauty is understood as quality, habitability, proximity, and resilience of places”, he stated.

@PetrosFassoulas, from @EMInternational urges us to “find strength in beauty in today’s troubled times. We need beauty in our lives, work & in the 🇪🇺 project overall. Without culture & heritage we don’t have memory of our past and thus cannot be inspired for the future”. pic.twitter.com/hzmisQvy9w

Petros Fassoulas, Secretary General of the European Movement International, urged to find strength in beauty in today’s troubled times. “We need to speak about beauty at this moment, and not let division and war win. We need to add beauty to our lives, our work and the European project overall. Without culture and heritage we don’t have the memory of our past and thus cannot be inspired for the future,” he said.

Between the two parts of the event, Marshall Marcus, Secretary General of the European Union Youth Orchestra, delivered a powerful “Bridge-building address” entitled: “Listening with beauty”.

During his intervention, he explored the role of bridge-building to truly help meet the biggest challenges in society. “Beauty should be, must be – the constant companion in everything that we do. In peace, or in war. So when we strive for peace, when we show solidarity, when we act sustainably, those acts are so many more times powerful, more affecting and more influential, if they are themselves acts of beauty. We become, that is, everyday bridge builders with beauty”, he stated.

Marshall Marcus then presented the performance on the island of Delos by musicians from the EUYO on the occasion of the launch of the World Human Forum’s Alpha-Mission Delos project as an example of this ‘bridge-building with beauty’.

Referring to the following Concert of Solidarity with the people and culture of Ukraine, he emphasised that “In just the same way, tonight’s Ukrainian musicians will be a bridge between the music, the felt need for peace, and us, the audience. And that bridge, ladies and gentlemen, is the bridge between ourselves as humans, and the beauty that needs to be allowed into all of our activities, all of our transactions, if we are to feel fully human”.

Concert of Solidarity with the people and culture of Ukraine

At the concert six talented young Ukrainian musicians – Katja Suglobina (violin), Oksana Pinchuk (violin), Marta Deichakivska (viola), Natalia Subbotina (cello), Natalia Smischenko (harp) and Kyrill Korsunenko (piano) – performed a musical programme of classical and traditional melodies to emphasise the cohesive and healing power of music and heritage to build lasting bridges between the citizens and communities from Ukraine, Europe and the rest of the world.

The concert was introduced by Jimmy Jamar, Head of Europa Nostra Brussels Office and followed by addresses, starting with Sneška Quaedvlieg-Mihailović, Secretary General of Europa Nostra, who recalled the powerful words by European Commission President Ursula von der Leyen at the opening of the New European Bauhaus Festival: “Europe must support the reconstruction of Ukraine, together with the Ukrainian people. And we must do it right, in line with the New European Bauhaus principles”. “We stand ready to contribute to this grand design!”, added Sneška Quaedvlieg-Mihailović.

H.E. Mr. Oleh Shamshur, Ambassador of Ukraine, conveyed a strong message on behalf of the Ukrainian people, while stressing the tragic reality of a war raging on the European continent. “Ukrainian people are facing a tragic moment, while defending the European democratic model – one that is based on the shared values of democracy, human rights and rule of law”, he stated.

As host of the event and following his recent visit to Kyiv, Philippe Close, Mayor of Brussels, reiterated his solidarity with Ukraine and affirmed that “events like the New European Bauhaus Festival remind us that humanity can advance in peace through cultural expression and social progress. We fight for the same values,” he underlined.

Last but not least, Themis Christophidou, Director-General for Education, Youth, Sport and Culture, European Commission, responded to these calls for support. “It is impossible for us Europeans, who know well the value of peace, not to feel the pain of Ukrainians. You can count on our support, not only the European Commission’s but the European community at large”, she said.

🎼🎶Music speaks louder than words. Many thanks to the six young Ukrainian musicians for their beautiful & moving performance at our “Solidarity Concert with the people and culture of Ukraine”, organised in the frame of the #NewEuropeanBauhaus Festival. #WeStandWithUkraine 🇺🇦🇪🇺 pic.twitter.com/yHLJpDgtPu

The concert was organised in the frame of the ongoing crowdfunding campaign to support the defenders of Ukraine’s endangered heritage jointly run by Europa Nostra and the Global Heritage Fund. The funds raised will be used for the Heritage Solidarity Fellowship for Ukraine recently launched as a result of the crowdfunding campaign and thanks to the matching support of ALIPH and in partnership with the Heritage Emergency Response Initiative (HERI) based in Kyiv. Donations are still welcome at donation.europanostra.org.

Donations can also be made for the ”Ambulance for hospital” initiative of the Emigration Project supported by the 6 Ukrainian musicians. The funds raised will be used for the acquisition of a fully-fledged ambulance and medical equipment for Ukraine. Make your donation at BE 62 0682 4793 5461 with a note “Ambulance for hospital”. 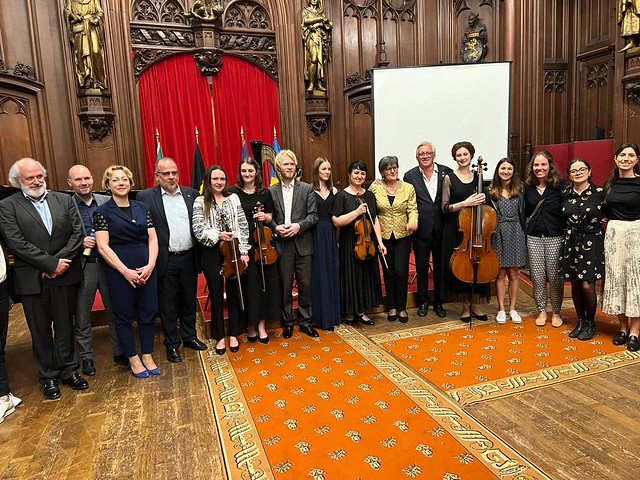