Berlin hosted a memorable ceremony in honour of the winners of the EU Prize for Cultural Heritage / Europa Nostra Awards 2018 on the evening of 22 June. Around 1,000 people paid tribute to this year’s most impressive accomplishments in conservation, research, dedicated service, and education, training and awareness-raising from all over Europe. Europa Nostra’s President Plácido Domingo and European Commissioner Tibor Navracsics hosted the ceremony, which was honoured with the presence and participation of the Federal President of Germany, Frank-Walter Steinmeier. 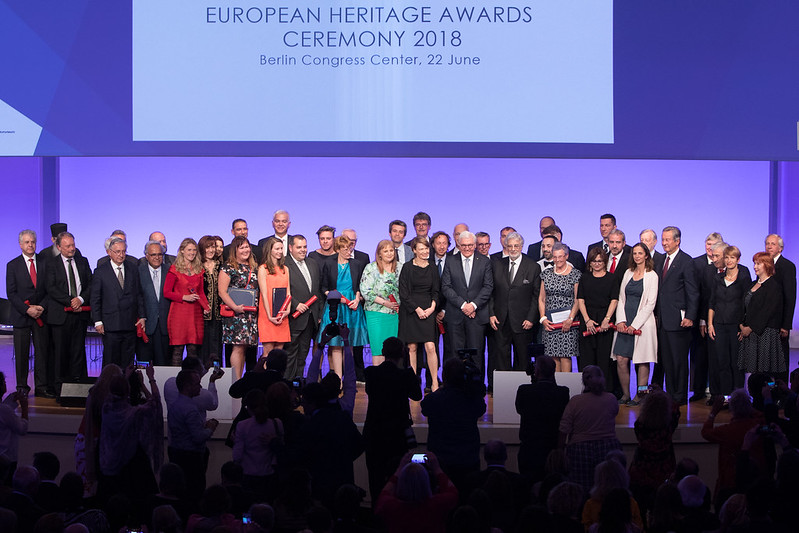 “Cultural heritage is not dull in the least. It tells many exciting stories, not just from the past but also from today, and explains why we are who we are. It makes us curious about what lies ahead and it compels us to leave a lasting legacy for our children and our grandchildren,” stated the Federal President of Germany at the opening of the ceremony.

The Chairs of each of the four categories – Koen van Balen (Conservation), Etienne Poncelet (Research), Álvaro Santa Cruz (Dedicated Service to Heritage) and Goranka Horjan (Education, Training and Awareness-Raising) – conferred the 29 laureates of the EU Prize for Cultural Heritage / Europa Nostra Awards, who came from 17 countries participating in the EU’s Creative Europe programme, as well as the winner of the Europa Nostra Award, who came from Turkey, a European country not taking part in that programme.

Maestro Plácido Domingo, President of Europa Nostra, and Tibor Navracsics, European Commissioner for Education, Culture, Youth and Sport, alternately announced and presented the 7 Grand Prix, selected by a jury of experts and entitled to receive €10,000 each. Hermann Parzinger, President of the Prussian Cultural Heritage Foundation (SPK) and Executive President of Europa Nostra, unveiled the Public Choice Award, which went to the rehabilitation of the Botanical Garden of the National Palace of Queluz, Sintra, Portugal.

In their speeches, the President of Europa Nostra and the European Commissioner for Culture paid homage to all winners.

“In a brief time, we have made a fascinating journey through Europe. We have heard many stories of devotion of people for their heritage. We have admired the talent, knowledge, hard work and dedication of so many individuals, associations, foundations, businesses, cities, regions and governments. Thank you for being the guardian angels of our heritage – the guardian angels of the spirit and the soul of Europe!” stated Plácido Domingo.

“The winners whose work we recognise here tonight fully deserve to be celebrated. Through their outstanding creativity and quality, their projects embody the key aims of the European Year of Cultural Heritage. They show us new and innovative ways to preserve and protect cultural heritage. They highlight how cultural heritage can drive economic and social development. And they enable people to feel part of a common European experience, a community of communities that makes up this fascinating, complex continent,” said Tibor Navracsics.

“As President of Europa Nostra and as an artist, I am proud to be among the first to sign our Berlin Call to Action. I now invite all of you to support it, to sign it and to share it with others in Europe. Indeed, the time for action is now,” emphasised Plácido Domingo.

“I welcome the Berlin Call to Action. It is a major step in the direction of a new forward looking policy for Europe’s future, building on the greatest asset that we have: our cultural heritage,” noted Commissioner Navracsics.

During the Ceremony, a video selection of the most inspiring contributions to the #Ode2Joy Challenge – launched by Europa Nostra and its President to celebrate Europe and our shared heritage on the occasion of the European Year of Cultural Heritage 2018 – was broadcast. Among the contributions that were shown were the Fado version by Portuguese singer Katia Guerreiro, the RTÉ Philharmonic Choir’s performance recorded at the heritage site of Newgrange in Ireland, the #Euphonia project filmed at BASE Milano, several “Serenades for a Chimney” recorded at industrial heritage sites initiated by E-Faith, an original reinterpretation by Syrian musician Yaman Suheim at Europe Day in Bougival, as well as many flash mobs, school choirs and orchestras from across Europe (watch video compilation).

“We were delighted to get such an enthusiastic initial response to the Ode2Joy Challenge in all parts of Europe. We very much hope that many other contributions will follow,” affirmed Maestro Domingo.