The roundtable discussion “Mobilising the transformative power of European Foundations for the benefit of Cultural Heritage”, organised by Europa Nostra in cooperation with the European Investment Bank Institute, was held on 23 September at the Giorgio Cini Foundation in the frame of the European Cultural Heritage Summit 2021 in Venice. The meeting gathered representatives from the philanthropic sector across Europe,- both in person and online. It provided an ideal platform to discuss the best ways to enhance cooperation between private foundations active in the field of heritage in Europe and beyond, and reflect upon the conditions and modalities of a possible creation of a “European Cultural Heritage Foundation”. 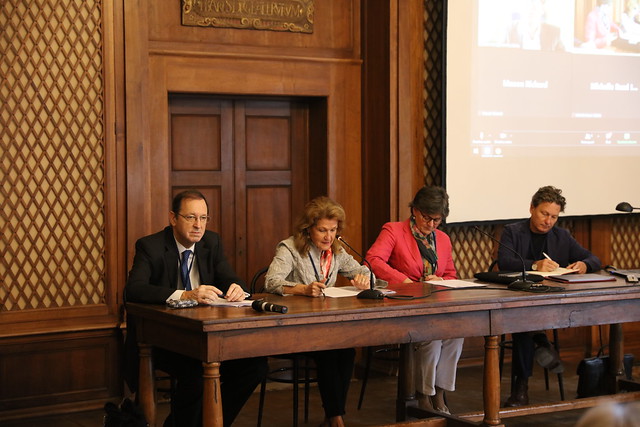 The roundtable discussion started with introductory remarks from the co-organisers and the hosting organisation. Sneska Quaedvlieg-Mihailovic, Secretary General of Europa Nostra, reminded that this event builds on several important initiatives that have taken place in recent years, such as the initial discussions of private foundations held in cooperation with the Calouste Gulbenkian Foundation in Lisbon ahead of the European Year of Cultural Heritage in 2018. It is also a follow-up of the workshop on complementary funding sources for cultural heritage organised in January 2021 by the European Commission aiming to facilitate access to funding sources that complement the available public support.

Francisco de Paula Coelho, Dean of the European Investment Bank (EIB) Institute, explained the crucial importance of safeguarding cultural heritage, as evidenced by the 7 Most Endangered joint programme of Europa Nostra and the EIB Institute. He emphasised that optimal investments in cultural heritage contribute to addressing some of the key challenges of today, such as climate change.

Renata Codello, Secretary General of the Giorgio Cini Foundation, highlighted that the restoration and redevelopment of the San Giorgio Maggiore Island in Venice, where the Foundation is located, were included in the Foundation’s statutory aims, making it the earliest example in Italy of a private organisation with cultural and humanistic goals. Back then and still today, the Foundation’s projects focus on solving some of the urgent problems afflicting Italy and Venice, as well as training young people professionally. 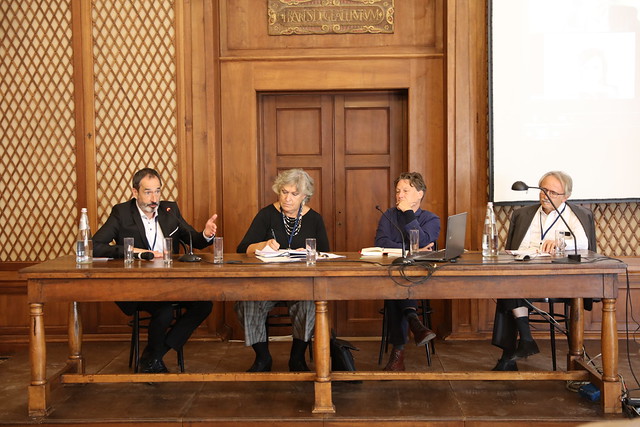 The discussion continued with an exchange of views moderated by Cristina Loglio, responsible for European Policies on Culture at the Touring Club Italiano (a Member Organisation of Europa Nostra) – focusing on the following points:

Reacting to these issues, the participants shared their views on these topics. Max von Abendroth, Executive Director of DAFNE – Donors and Foundations Networks in Europe -, used the Philanthropy Coalition for Climate as a best practice example to inspire the heritage sector to further mobilise, raise awareness – both of private foundations and the general public – as well as to build trusted private/public partnerships.

Delphine Moralis, Chief Executive of the European Foundation Centre, affirmed that culture and heritage projects provide concrete and long-term investments for our society, having a positive impact on health, wellbeing and innovation, as evidenced by the study Arts and Culture at the Core of Philanthropy. “Europe, philanthropy and culture are a mindset,” she stated, calling for this mindset to become a reality.

Valéry Freland, Executive Director of ALIPH – the International alliance for the protection of heritage in conflict areas, explained the specificities of this private foundation to succeed in uniting private and public partners around specific heritage and peace-building causes globally: quick response to international crisis, support to concrete projects and financial integrity.

At last, André Wilkens, Director of the European Cultural Foundation and partner of the Cultural Deal for Europe, stressed that the COVID-19 crisis provided a timely opportunity to redefine philanthropy with a European purpose and develop much-needed new forms of public-philanthropic partnerships, including a legal framework for European philanthropy. “It is now time to reinvent European philanthropy, create a cutting-edge model to tackle today’s challenges. Our purpose is not culture, it is to grow a European sentiment through culture and education”, he stated.