On the morning of 15 May, European experts attending the European Heritage Congress 2017 in Turku went on an exceptional excursion to Helsinki-Malmi Airport, listed among the 7 Most Endangered heritage sites in Europe in 2016 by Europa Nostra and the European Investment Bank Institute. The 15 participants flew from Turku to Helsinki-Malmi Airport on board a DC-3 aircraft built in 1942. During this special visit, the delegates expressed their strong support for the campaign to keep this historic airport operational. This campaign has been led by the Friends of Malmi Airport and Europa Nostra Finland, who nominated the site for the 7 Most Endangered programme 2016. 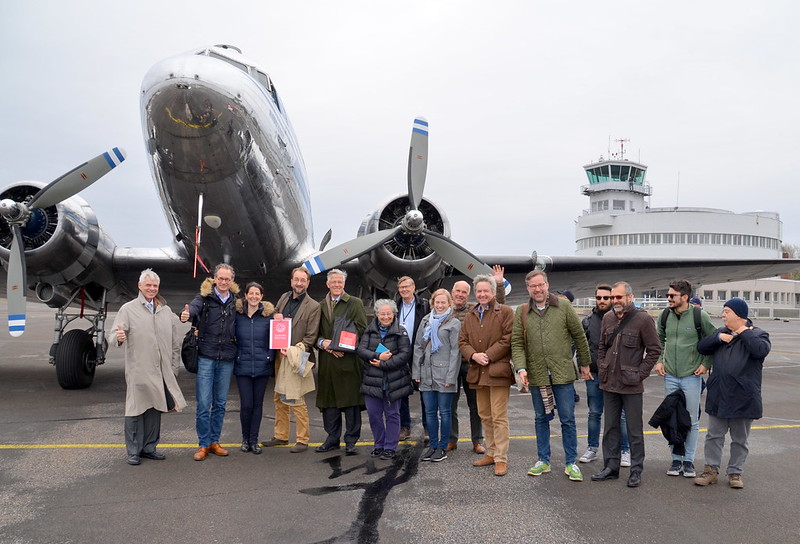 Built in the mid-1930s in the functionalist architectural style, Helsinki-Malmi Airport is one of the best‐preserved still operational pre‐World War II international airports in the world. It is by far the busiest airport in Finland after Helsinki‐Vantaa International. Complete with the original hangar, terminal and runways, the Malmi site, as a whole, has been declared a cultural environment of national significance by Finland’s National Board of Antiquities. However, the City of Helsinki’s General Plan proposes to fill the airport with apartment blocks to be constructed in the early 2020s.

The distinguished group of visitors included Michel Magnier, Director for Culture and Creativity at Directorate-General for Education, Youth, Sport and Culture of the European Commission, Europa Nostra’s Council Members Tapani Mustonen, President of Europa Nostra Finland, Erik Schultz, President of Europa Nostra Norway, and Karel Loeff, Director of Bond Heemschut based in the Netherlands, among others. Finnish policymakers, Member of the Finnish Parliament Matti Vanhanen and City Councillor Björn Månsson were also present.

Following a welcome address by Timo Hyvönen, Chairman of the Friends of Malmi Airport, the heritage experts were informed of the historic airport’s early days of commercial air traffic.

Michel Magnier described the visit as an excellent opportunity to better understand the type of challenges that valuable cultural heritage sites may come against at national level.

Erik Schultz, who also participated in the expert mission to the Helsinki-Malmi Airport undertaken on 2-3 June 2016, emphasised that it is a precious site of European cultural heritage and is exceptional in that it is still functional. “It combines the quality of Finnish modern architecture with one of the very first international airports that is still intact. It is in the interests of Europe that an airport like this is saved,” he stated.

A legislative initiative to preserve Helsinki-Malmi Airport was presented to the Speaker of Parliament Maria Lohela on 8 February 2017. The Lex Malmi initiative, signed by more than 56.000 people, proposes an expropriation of Malmi Airport from the City of Helsinki by the State of Finland. With this expropriation the State would secure the air connections between the capital region and the provinces. In addition, the airport would serve as a center of development for future aviation services.

Europa Nostra has sent a message of the significance of Malmi Airport to the Finnish Parliament and to Helsinki City Council.