Home News European Heritage Green Paper preview: a debate on the value of cultural heritage for the green future of Europe

European Heritage Green Paper preview: a debate on the value of cultural heritage for the green future of Europe 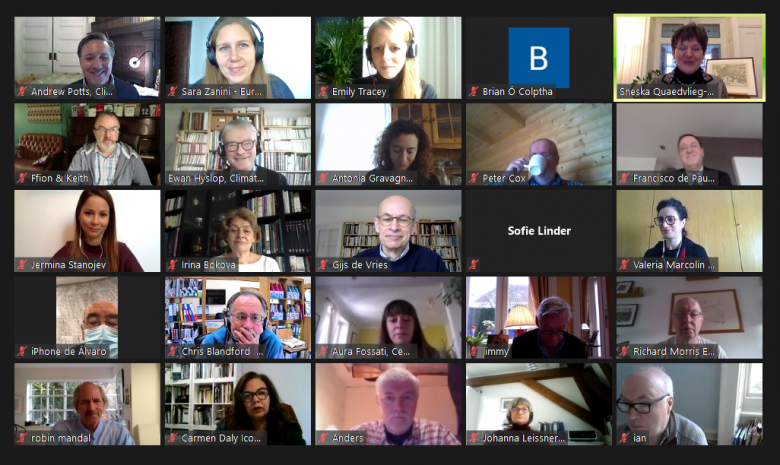 The project is the result of a great first cooperation between Europa Nostra and ICOMOS, both highly committed to address the value and importance of cultural heritage and climate emergency. Moreover, this important project strengthens the long-lasting partnership with the European Investment Bank Institute, that since 2013 supports one of Europa Nostra’s flagship programmes, the 7 Most Endangered.

The preview event, jointly moderated by Sneška Quaedvlieg – Mihailovic – Secretary General of Europa Nostra – and Ewan Hyslop – Chair of the Europe Region at Climate Heritage Network, offered the audience an overall presentation of the European Heritage Green Paper by Andrew Potts, Coordinator of the project and already Coordinator of the Climate Change and Heritage Working Group (CCHWG). In presenting the document’s objectives and an overview of the chapters, Mr Potts highlighted the fact that climate change is one of the most significant threats to people and their cultural heritage worldwide, and that The European Green Deal is one of the planet’s most ambitious plans to tackle this common issue. “Cultural heritage needs the EGD to succeed and vice versa”, stated Mr Potts, while addressing the immense potential of cultural heritage to drive climate action, support a just transition to a low carbon economy and to guide us all to a climate-resilient future.

“We need to take this opportunity to boost the European identity and mobilise Europeans around common values” stated Irina Bokova, former UNESCO Director-General, in her encouraging introductory statement. In addition to the preview of the paper, the event included two key reactions to the European Heritage Green Paper draft, respectively by Gijs de Vries, senior visiting fellow at the London School of Economics and Political Science (LSE) and by Francisco de Paula Coelho, Dean at the European Investment Bank Institute.

Gijs de Vries in his contribution remarked on how worlds of culture and heritage could contribute to the global agenda and expressed that the Sustainable Development Goals constitute both a challenge and an opportunity for the cultural sector, stressing on the importance of bringing the global agenda into the local activities of heritage organisations.

“The challenge now is for Europe to develop a holistic, comprehensive approach to sustainable development, and approach that creates synergies between different policy communities. Synergies, for example, between cultural organisations, environmental organisations, and development organisations – organisations that are not (yet) used to work together. But governments and the European Commission, too, must do their part […] Culture and heritage must be mainstreamed into EU policies from the Green Deal to the Skills Agenda, from the Digital Agenda to EU development policy”. – stated Gijs De Vries, adding how this joint project by Europa Nostra and ICOMOS constitutes an excellent example of integrated approach.

Important call to action by Gijs de Vries, @LSEEcon, on the occasion of the European Heritage #GreenPaper: “We must become producers of change and not only recipients. Culture needs to be integrated in the different agendas of the EU & the #GreenPaper can play an important part”. pic.twitter.com/lqGwLf18a4

In his reaction to the draft European Heritage Green Paper, Francisco de Paula Coelho, Dean at the European Investment Bank Institute, highlighted how Climate Change has been a priority for the EIB, that has become the EU Climate Bank. He explained how the EIBI is playing a leading role in mobilising the finance needed to reduce emissions, in helping countries adapt to the impacts of climate change and to contribute in achieving the environmental sustainability goals. He also mentioned the work carried out via the EIB Institute, which supports research, education and cultural heritage activities.

“Climate change has been for many years a priority for the @EIB, because we are the EU #climate bank” Many thanks to Francisco de Paula Coelho, Dean of the @EIBINSTITUTE, for reaffirming @EIB‘s strong support to the European Heritage #GreenPaper & its important global mission🇪🇺🌐 pic.twitter.com/pSuvN4Q03D

Towards the end of the event, members of the Expert Advisor Group for the “European Heritage Green Paper” involved in the project (Antonia Gravagnuolo, Keith Jones, Johanna Leissner, Ian Lumley, Valeria Marcolin and Jermina Stanojev) had the chance to intervene and contribute actively to the Q&A session. You can read more about the Expert Advisory Group here.

The Green Paper is planned to be formally issued in early 2021, with a high-level event organised jointly with the EIB Institute and ICOMOS, and will be widely disseminated to the EU Institutions and other stakeholders concerned with the shaping of the European Green Deal.

Interested to know more about this event?
Watch the video recording from the event available on demand (via Facebook) here.
Read the news item published on the EIB Institute website here.