The second panel discussion entitled “Cultural Heritage, a catalyst for peace and mutual understanding” focused on the role of cultural heritage in Europe’s relations with its partner countries and as a vector for peace-building, reconciliation and international cooperation. It was a follow-up to the Conclusions on EU Approach to Cultural Heritage in conflicts and crises adopted by the Council of the European Union in June 2021, which recognises the role of cultural heritage as an important vehicle for peace, democracy and sustainable development by fostering tolerance, mutual understanding, reconciliation as well as intercultural and interfaith dialogue. 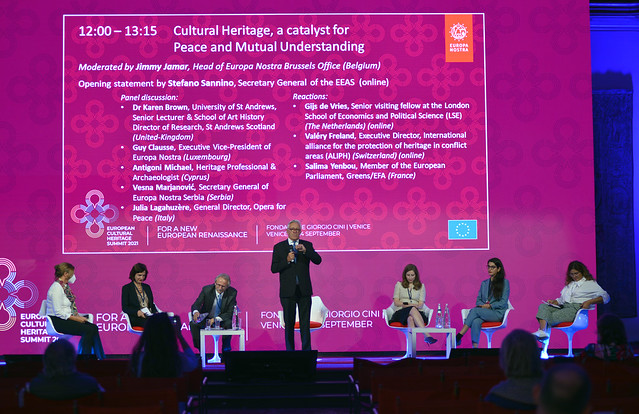 The panel was moderated by Jimmy Jamar, Head of Europa Nostra Brussels Office, and introduced by Stefano Sannino, Secretary General of the European External Action Service (EEAS), who recalled that “cultural heritage is a formidable instrument of peace and coexistence. In times of crisis and fragility, it is no coincidence that it is the first to be attacked and destroyed by belligerent parties to demoralise the population and erase its identity”. 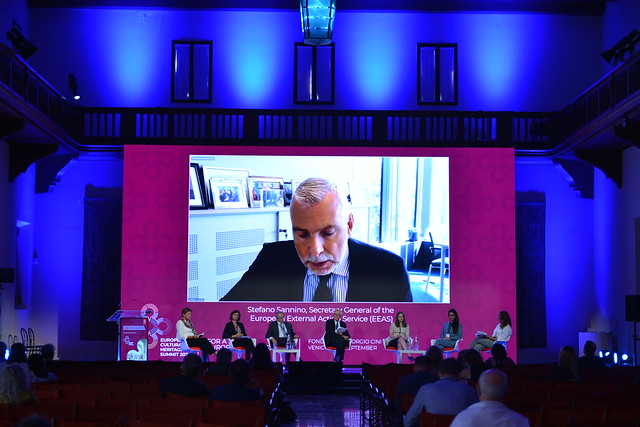 Dr Karen Brown, Senior Lecturer and School of Art History Director of Research at the University of St Andrews Scotland, presented EU-LAC Museums − Museums, Community & Sustainability in Europe, Latin America and the Caribbean, winner of a ILUCIDARE Special Prize 2021 for excellence in Heritage-led International Relations. Since 2014, this international collaboration has jointly developed new wisdom about museum community development, youth work and digital curation, to examine and promote a vision of museums focused on community needs.

Guy Clausse, Executive Vice-President of Europa Nostra, illustrated the importance of cultural heritage as a driver for peace and sustainable development with examples from the 7 Most Endangered programme run by Europa Nostra in partnership with the European Investment Bank Institute since 2013. In particular, he mentioned the Buffer Zone of the Historic Centre of Nicosia in Cyprus and the Dečani Monastery in Kosovo*. He also referred to the ongoing conflict in the Nagorno-Karabakh area and the urgent need to protect its rich cultural heritage. 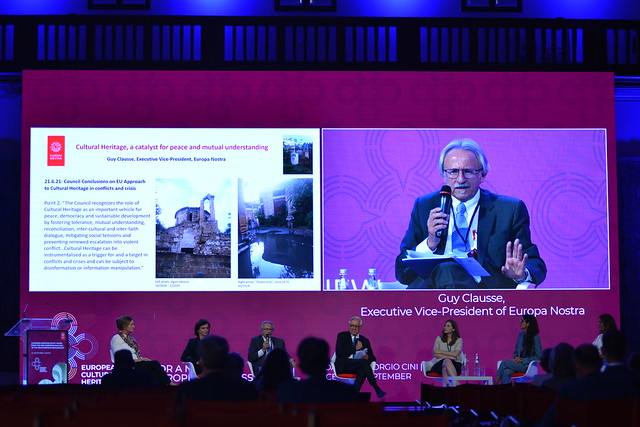 Antigoni Michael, Heritage Professional, Archaeologist and member of the European Heritage Youth Ambassadors joint programme of Europa Nostra and ESACH, focused on “cultural heritage in the frozen conflict zone of Cyprus”. In order to move from a “traumatised past to a common future”, she called on systematically engaging local communities with their heritage and involving the younger generations in the decision-making process. 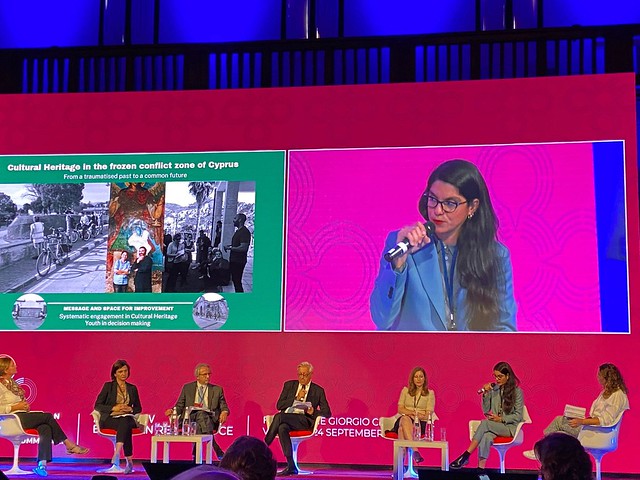 Vesna Marjanović, Secretary General of Europa Nostra Serbia, highlighted that our democracy is becoming endangered intangible heritage in some parts of Europe. With a slide featuring famous Yugoslav novelist Ivo Andrić standing in front of the Mehmed Paša Sokolović Bridge in Višegrad (recognised as a UNESCO World Heritage Site in 2007) in Bosnia and Herzegovina, she stated: “This is a story of childhood, wars, borders, destruction, reconstruction, art and history. We must empower citizens to monitor democratic processes and civil society can be a real driver in this important task”. 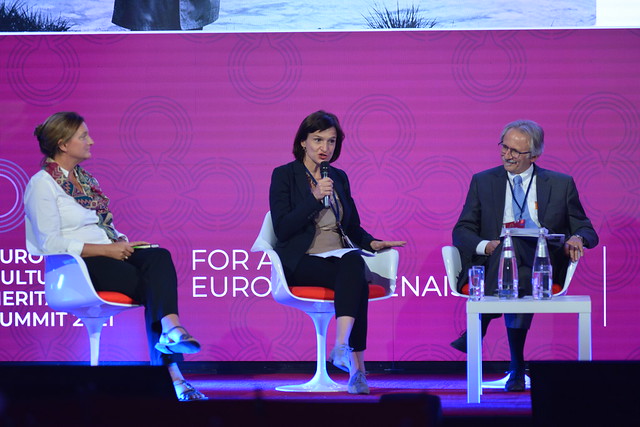 Julia Lagahuzère, General Director of Opera for Peace – Leading Young Voices of the World, explained how this new cultural movement helps building an inclusive and creative future together through passion and determination. Convinced that culture and cultural heritage can help change the world for the better, she applauded the support of the European Union to put artists at the heart of our society. 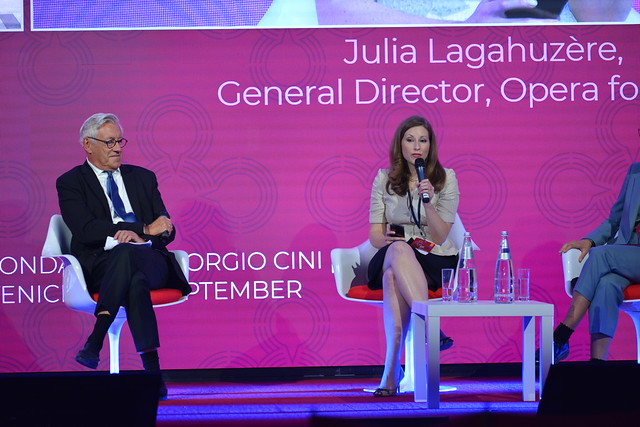 A series of reactions followed the panel discussion. Gijs de Vries, Senior visiting fellow at the London School of Economics and Political Science (LSE), recalled key related aspects of EU policy, especially in the fields of security, development, human rights, as well as the EU’s role in achieving the Sustainable Development Goals (SDGs). “We cannot have development without culture. We need culture-based partnerships between Europe and the rest of the world. Europa Nostra and the European Heritage Alliance can play a key role in bridging policy and practice”, he stated. 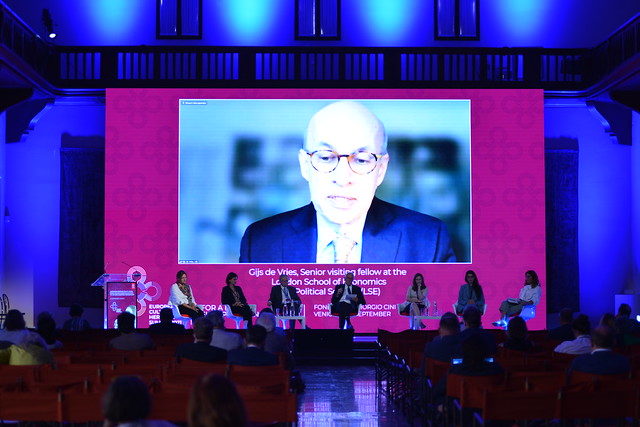 Valéry Freland, Executive Director, International alliance for the protection of heritage in conflict areas (ALIPH), highlighted two vital aspects to enhance the role of cultural heritage for dialogue and peace-building: to carry concrete projects on the ground and to involve local inhabitants and communities as much as possible. “Cultural heritage protection is a duty for all of us”, he highlighted. 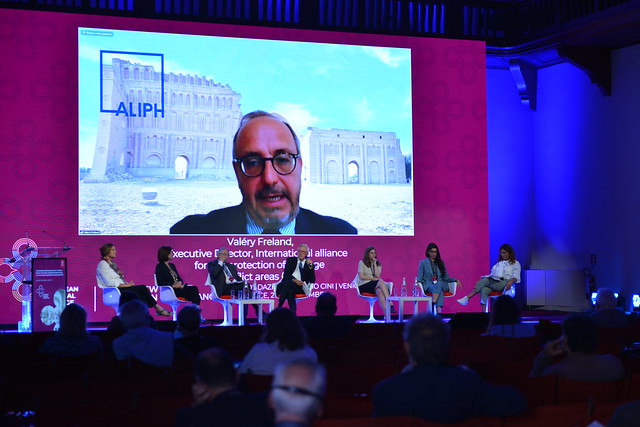 At last, MEP Salima Yenbou, Member of the Culture and Education and of the Foreign Affairs Committees of the European Parliament (Greens/EFA, France), emphasised that our shared cultural heritage is what brings Europeans together. She called on citizens across Europe to “use the occasion of the Conference on the Future of Europe to demand more cultural competencies for Europe”. 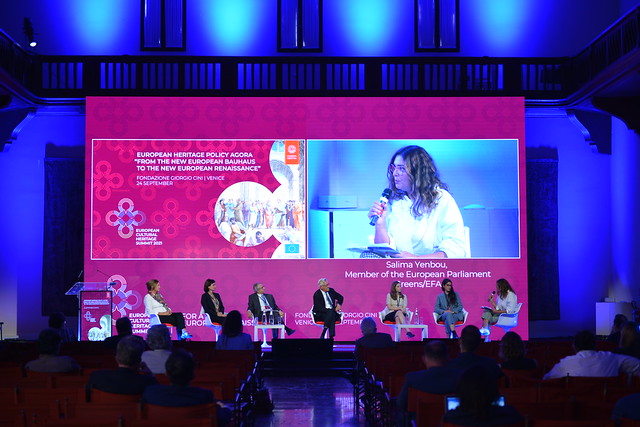