Europa Nostra and the European Union Youth Orchestra (EUYO), our trusted partner, held the exceptional Concert for the Future of Venice – Floating Autumn on the evening of 23 September, as a part of the European Cultural Heritage Summit 2021 in Venice. Palladio’s Basilica del Redentore, one of Venice’s greatest churches, was the location for this breathtaking concert. The concert featured the world première of Floating Autumn, a re-composition by Italian composer Carmen Fizzarotti of Autumn from Vivaldi’s The Four Seasons, as part of The [Uncertain] Four Seasons project. The concert will be broadcast on 1 November at 8.30pm on Rai Radio 3 Classica. 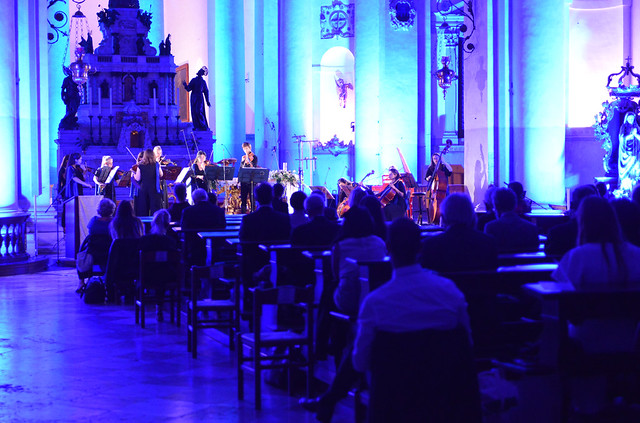 The [Uncertain] Four Seasons is a global project designed to persuade political leaders to sign the Leaders Pledge for Nature, a pledge committing to reversing biodiversity loss by 2030. Using an algorithmic re-composition of Vivaldi’s The Four Seasons informed by current climate change predictions for 2050, it portrays in music the catastrophic climate effects that our cities can expect. The Concert for the Future of Venice – Floating Autumn included the 17 Strokes of the Bell for Sustainability, in which the 17 Sustainable Development Goals of the United Nations’ 2030 Agenda can be heard interwoven into the music. It featured music by the great trio of composers Claudio Monteverdi, Giovanni Gabrieli and Antonio Vivaldi. 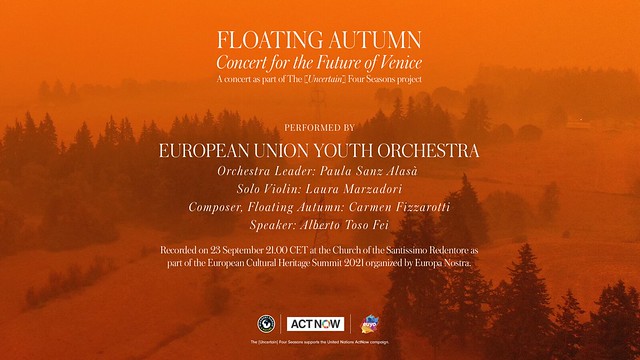 The concert included readings on the theme of Venice and sustainability by Alberto Toso Fei, renowned Italian journalist, writer and historian, as well as a call for world leaders to sign the Leaders Pledge for Nature by Europa Nostra’s Secretary General and EUYO Advisory Council member Sneška Quaedvlieg-Mihailović.

The Concert for the Future of Venice – Floating Autumn will also be streamed on 1 November on the YouTube cannel of EUYO, along with many other versions of The [Uncertain] Four Seasons from around the world, in a 24-hour streaming event, leading up to COP26 in Glasgow.

Musicians of the European Union Youth Orchestra also performed at the European Heritage Awards Ceremony held on the afternoon of 23 September at the Giorgio Cini Foundation in Venice. The thoughtfully curated musical programme comprised a selection of early baroque fanfares and renaissance dances, an excerpt from Gustav Holst’s The Planets suite, and the rousing baroque music of Heinrich Ignaz Franz Biber’s Battalia à 10. 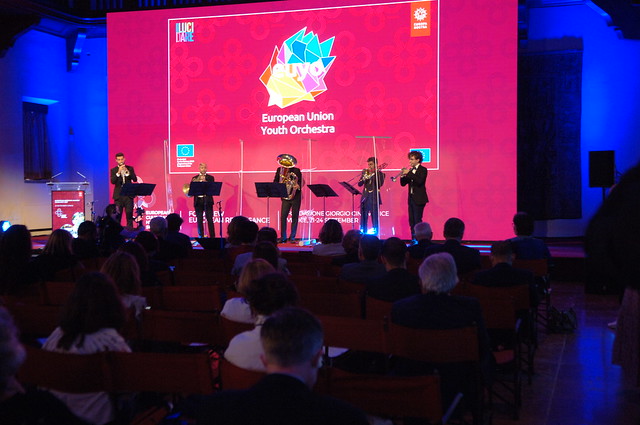 Moreover, EUYO Secretary General Marshall Marcus contributed to the European Heritage Policy Agora held on 23 September at the Giorgio Cini Foundation in Venice, taking part in the panel discussion “Culture and Heritage as the basis of a New European Renaissance”. This session opened the perspectives for a broad discussion on the future of the European project altogether, where culture and cultural heritage would be seen as a vector irrigating all future goals and priorities of the EU. This was a direct contribution to the ongoing Conference on the Future of Europe, also coinciding with its Plenaries and European Citizens’ panels. The panel gathered proposals and ideas to craft a new vision for the entire European project. 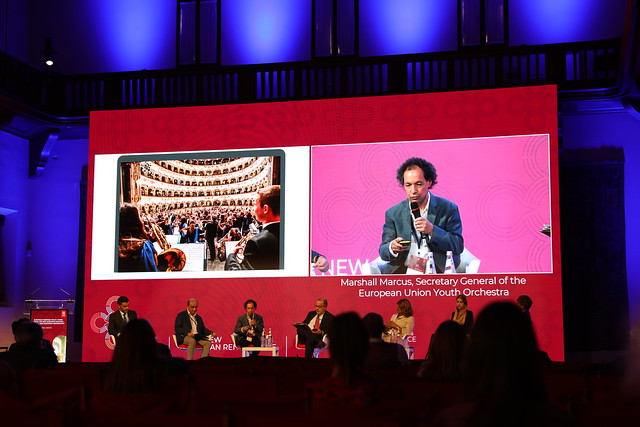 The Secretary General of the European Union Youth Orchestra recalled that “the cultural, creative and heritage sectors have the ability, skills and knowledge to help make a New European Renaissance; but to make it work, we have to remember to dare, to be creative and to reach out to people”. To add the much-needed soul to the European project, the New European Renaissance ought to be about aesthetics, ethics and ecology.