The celebration of Europe’s best heritage achievements of 2021 was hosted on the afternoon of 23 September in the historic surroundings of the Giorgio Cini Foundation in the World Heritage City of Venice. The European Heritage Awards Ceremony took place in the context of the European Cultural Heritage Summit 2021 held between 21 and 24 September. The Ceremony welcomed 220 guests in person and was followed live by hundreds of heritage professionals, volunteers, lovers and supporters from across Europe and beyond via a livestream on Europa Nostra’s website. 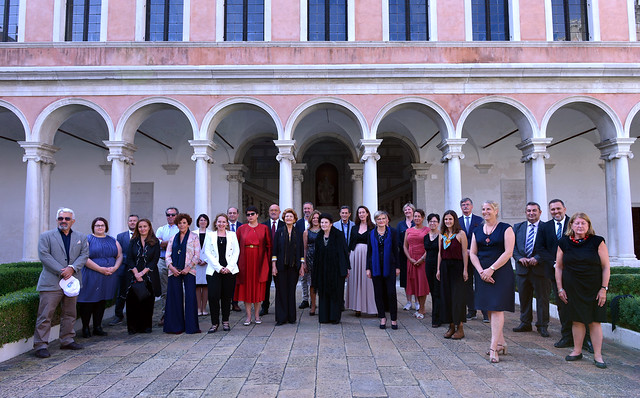 The European Heritage Awards Ceremony 2021 was co-hosted by Sneška Quaedvlieg-Mihailović, Secretary-General of Europa Nostra, and Alberto Toso Fei, renowned Italian journalist, writer and historian. The two hosts were connected live from the Sala degli Arazzi and the Sala Capriate where the festive event took place. The Ceremony was accompanied by a thoughtfully curated musical programme, performed by musicians from the European Union Youth Orchestra, a trusted European partner of Europa Nostra.

High level representatives from the European Commission and Europa Nostra paid tribute to the 2021 laureates of the European Heritage Awards / Europa Nostra Awards – the most impressive accomplishments in conservation, research, dedicated service to heritage, and education, training and awareness-raising from all over Europe.

Mariya Gabriel, European Commissioner for Innovation, Research, Culture, Education and Youth, sent an inspiring and thoughtful message to all of this year’s winners and those watching the Ceremony.

“At a moment when Europe is determined to build back better, these success stories are a true inspiration and a powerful example of what we, as Europeans, can achieve together despite the challenges we are faced with. With the implementation of your projects, you will provide opportunities for European citizens, especially young people to closely connect with our rich cultural diversity. Your projects prove to all of us how important it is to understand and preserve our past in order to better build our present and future. You have our immense gratitude for that”, said Commissioner Gabriel.

“Each one of the winners that we celebrate tonight demonstrates the potential of our common heritage to help deliver a new vision for Europe. I congratulate each one of you for contributing, through your dedication and talent, to Our Europe of Culture, and to a ‘Europe with a soul’. May these Awards be stepping stones to upscale your success and inspire heritage heroes in Europe and beyond!”, he stated.

This year’s 4 Grand Prix laureates, selected by the Board of Europa Nostra on recommendation by a jury of experts and entitled to receive €10,000 each, were alternately announced by two European Heritage Youth Ambassadors, Giovanni Pescarmona from Italy and Jelena Krivokapic from Serbia. 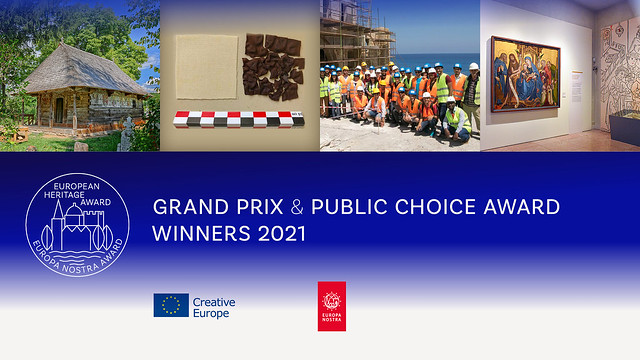 During the Ceremony, the 2021 winners of the ILUCIDARE Special Prizes, awarded within the European Heritage Awards / Europa Nostra Awards, were revealed by Chair of the ILUCIDARE Jury, Joanna Sanetra-Szeliga.

In 2020 the European Heritage Awards Ceremony was held entirely online, due to the safety precautions against COVID-19. For this reason, a special moment was also created during this year’s Ceremony in Venice to celebrate the 2020 recipients of the Grand Prix and Public Choice Award as well as the 2020 winners of the ILUCIDARE Special Prizes, awarded within the European Heritage Awards / Europa Nostra Awards. Each of these top winners were presented with a diploma by our Executive Vice-President Guy Clausse and gave a short speech.

During the Ceremony in Venice, Europa Nostra’s Executive President Hermann Parzinger announced the exciting news that the Board of Europa Nostra had unanimously decided to award the Europa Nostra Medal of Honour to its Vice-President Piet Jaspaert (Belgium) (read related news item).

The guests were welcomed to Venice by Massimiliano de Martin, Municipal Councillor of Venice for Urban Planning and Environment, while Renata Codello, Secretary-General of the Giorgio Cini Foundation, welcomed guests to the stunning headquarters of the Foundation.

The European Heritage Awards Ceremony 2022 will take place in the autumn in Prague, Czechia, during the European Cultural Heritage Summit 2022.