The winners of the 2020 European Heritage Awards / Europa Nostra Awards, Europe’s top honour in the field, were celebrated this afternoon with a virtual gathering that connected heritage lovers, professionals, volunteers and supporters from across Europe and beyond. Due to the safety precautions against COVID-19, the European Heritage Awards Ceremony was held entirely online for the very first time, with the virtual participation of Mariya Gabriel, European Commissioner for Innovation, Research, Culture, Education and Youth, and Hermann Parzinger, Executive President of Europa Nostra. During the online ceremony, representatives from the European Commission and Europa Nostra proudly announced the three Grand Prix laureates and the Public Choice Award winner, which were selected from among this year’s 21 winning achievements from 15 European countries.

The 2020 Grand Prix laureates are:
1) the exemplary restoration of the Basilica of Santa Maria di Collemaggio, L’Aquila (Italy), heavily damaged by the devastating earthquake of 2009;
2) the outstanding project Tramontana Network III (France, Italy, Poland, Portugal and Spain), dedicated to the research of the tangible and intangible heritage of Europe’s mountainous regions; and
3) the major exhibition Auschwitz. Not long ago. Not far away (Poland/Spain), marking the 75th anniversary of the liberation of the largest Nazi concentration camp. 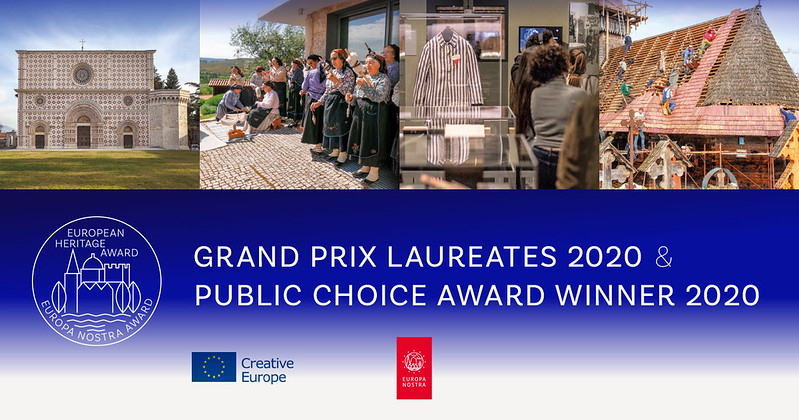 The Grand Prix laureates, chosen by an independent jury of experts and the Board of Europa Nostra, will receive €10,000 each. (Read below to learn more about these outstanding European heritage projects and the reasons why they received a Grand Prix).

The Public Choice Award went to the education, training and awareness-raising project The Ambulance for Monuments (Romania), which has rescued hundreds of heritage-listed buildings in the country through a large network of active heritage organisations. This project received the largest number of votes, cast via an online poll with the participation of over 12,000 citizens from all over Europe.

“The 2020 winners of the European Heritage Awards / Europa Nostra Awards represent what Europe stands for: creativity, resilience, innovation, solidarity, talent and dedication. This makes me proud – as European Commissioner and as a European citizen. I sincerely thank each one of them for demonstrating yet again that Europe’s shared cultural heritage is not only part of our past, but a valuable asset for tackling our present day challenges and for ensuring a better future for all. With their work, they illustrate the great potential of cultural heritage for Europe’s socioeconomic recovery in the aftermath of the pandemic,” said Mariya Gabriel, European Commissioner for Innovation, Research, Culture, Education and Youth.

“Honouring this year’s laureates of the European Heritage Awards / Europa Nostra Awards with a fully digital ceremony has been an exceptional and enriching experience. It has proved that excellence, commitment and perseverance in our heritage world know no limits. This is precisely what the 21 awarded achievements embody: these are stories of exceptional skills and teamwork, tireless dedication and bold action. On behalf of Europa Nostra, I wish to warmly welcome all of them to our ever-growing pan-European network of Heritage Excellence, which brings together the most captivating and outstanding heritage initiatives from across the continent. In the trying times we live in, might these heritage heroes inspire many others, in Europe and beyond, through the compelling power of their positive example,” stated Hermann Parzinger, Executive President of Europa Nostra.

During the online ceremony, representatives from the European Commission and the ILUCIDARE Consortium, including Europa Nostra, were delighted to unveil the two winners of the very first edition of the ILUCIDARE Special Prizes: Archaeology for a young future (Italy/Syria), for excellence in heritage-led international relations; and TYPA – Estonian Print and Paper Museum, Tartu (Estonia), for excellence in heritage-led innovation (read related separate press release).

The winners of the ILUCIDARE Special Prizes were selected by the ILUCIDARE partners from among the submitted applications to the European Heritage Awards / Europa Nostra Awards 2020. ILUCIDARE is a project funded by Horizon 2020 with the aim of establishing an international network promoting heritage as a resource for innovation and international relations.

The Basilica of Santa Maria di Collemaggio was heavily damaged by a tragic earthquake that hit the region on 6 April 2009. The restoration of the Basilica required not only an advanced conservation, but also respect for its special place in the life of the community. In December 2017, the long process of recovery was completed, allowing the community to again gather and celebrate at the Basilica. 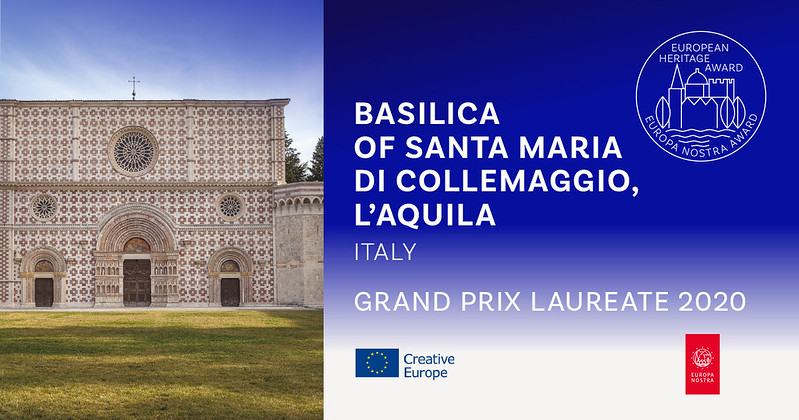 When choosing the Basilica of Santa Maria di Collemaggio to receive this year’s Grand Prix in the category Conservation, the Board of Europa Nostra noted: “This intervention, while conducted according to the highest technical and scientific standards is also innovative, truly exemplary and all the more important for its great symbolic value. Following the tragic earthquake that affected L’Aquila, the recovery of the building represents the rebirth of the entire city and is an opportunity for the community to heal the wounds caused by the earthquake. This project is an exemplary testimony of the importance of restoring heritage at risk”.

Alessandra Vittorini, former Superintendent for Archaeological, Artistic and Architectural Heritage and Landscape for L’Aquila and its Seismic Crater, stated: “This Award celebrates the commitment and passionate work of the members of staff of our Soprintendenza and the other offices working for the reconstruction of L’Aquila’s cultural heritage. We are very proud that the restoration of the Basilica of Santa Maria di Collemaggio is recognised as a European example of good practice. We hope that Collemaggio will continue to stand as a positive case study for those who work for the protection and conservation of cultural heritage, and a symbol of hope in the face of adversity for the people who experience it.”

The Superintendency for Archaeological, Artistic and Architectural Heritage and Landscape for L’Aquila and its Seismic Crater carried out the project with a team from three Italian universities (“Sapienza” University of Rome, Politecnico of Milan and University of L’Aquila). The restoration work was the result of a successful collaboration between the Ministry of Culture, Heritage and Tourism (MiBACT), the Diocese of L’Aquila and the Municipality of L’Aquila with the energy company ENI S.p.a. acting as sponsor.

Tramontana Network III is a celebration of the mountain heritage of Europe, an intangible heritage that is common across Europe in its richness of diversity. This comprehensive study sought to safeguard, collect and promote this heritage through its documentation and broad dissemination through interactive online portals, workshops, and events and publications. 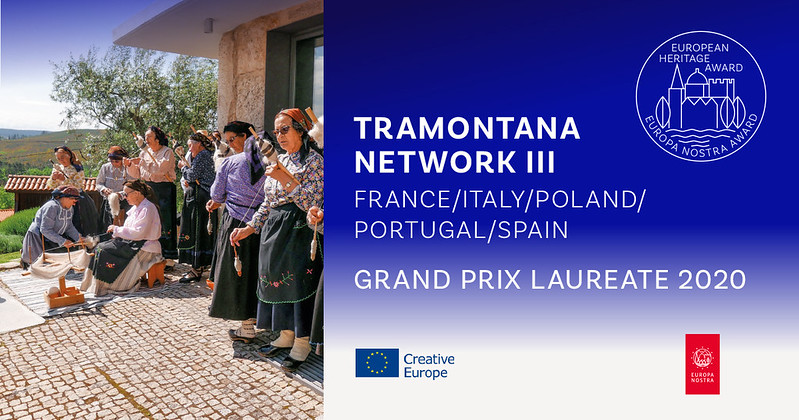 When selecting the Tramontana Network III to receive this year’s Grand Prix in the category Research, the Board of Europa Nostra emphasised: “Rural mountainous communities throughout Europe have an extremely rich and diverse cultural heritage, both tangible and intangible. The transborder and cooperative nature of the Tramontana Network III project is a strong example of the importance of research as a driver in equipping these communities with the necessary tools to preserve and celebrate their heritage.”

Luís Costa, Coordinator at Binaural Nodar, affirmed: “The Award has helped us realise that small-scale grassroots organisations devoted to rural cultural heritage and working collaboratively on a European scale can produce relevant, diverse and high impact results. The Award is also an homage to European rural communities and their memories, showing that European countries still have a deep material and symbolic connection with their rural territories. Finally, the Award gives visibility to the importance of digital archiving as a tool to enhance a sense of deep knowledge about the social fabric of Europe.”

Auschwitz. Not long ago. Not far away, POLAND/SPAIN

The exhibition Auschwitz. Not long ago. Not far away. provides those who cannot visit the Auschwitz Memorial with insight into the site’s story and the fate of its prisoners. Thanks to this exhibition, it is expected that more than 7 million visitors will learn about the complicated history of the largest German Nazi concentration camp – Auschwitz-Birkenau – as well as how and why the Holocaust happened. The exhibition first took place in Madrid and is currently in New York. It will continue its tour to a number of other cities around the world with the content adapted to include stories related to each locality. 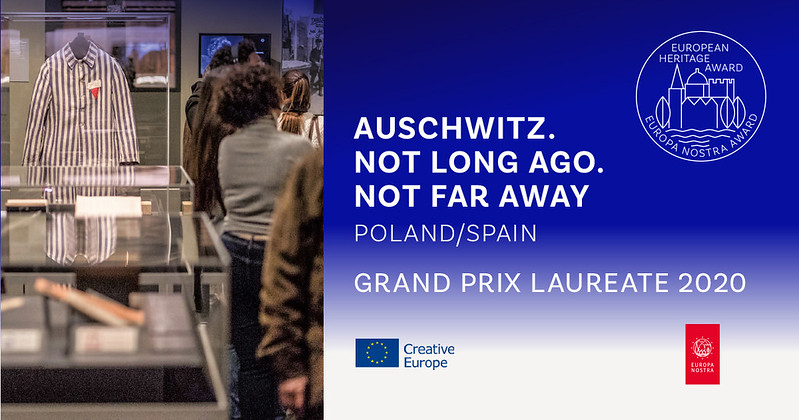 When choosing Auschwitz. Not long ago. Not far away. to receive this year’s Grand Prix in the category Education, Training and Awareness-Raising, the Board of Europa Nostra noted: “Europe is facing an alarming and unacceptable rise in nationalism, xenophobia, antisemitism, racism and hate speech. Exhibitions such as Auschwitz. Not long ago. Not far away. – based on rigorous research and European collaboration – are important in that they raise awareness and make the lessons from our shared past more tangible, offering factual and clear evidence of what can happen when various forms of extremism are tolerated”.

The exhibition is the result of the collaboration of two European entities, Musealia from Spain and the Auschwitz-Birkenau State Museum in Poland. It has been supported and provided with artefacts by more than 20 museums and institutions.

“Above all, the Award comes as an important tribute to all the victims, and a powerful reminder of how the story of Auschwitz is part of our shared cultural heritage. Hundreds of thousands have visited the exhibition, many of which are young students. It is very encouraging that so many people, in different continents, are willing to face such a deeply problematic part of our history. It speaks about the responsibility many individuals share not only to remember the past, but also to critically analyse our present,” stated Luís Ferreiro, Director, Musealia / Auschwitz Exhibition.

The Ambulance for Monuments, ROMANIA

The Ambulance for Monuments project has rescued hundreds of heritage-listed buildings in Romania through a large network of active heritage organisations. These emergency interventions are carried out by experts, students and trained craftsmen on a voluntary basis with local communities and authorities. At the heart of the project in each region is an intervention kit and a lorry equipped with tools, construction equipment and materials.

H.E. Klaus Werner Iohannis, President of Romania, in a special message read during the European Heritage Awards Ceremony, warmly congratulated the team that initiated this project: “Due to their vision, through the involvement of young people, of the specialists, authorities and sponsors, many monuments at risk have been saved during the five years since The Ambulance exists, thus testing the viability of a model of social cohesion emerging from cultural values and local identity.” 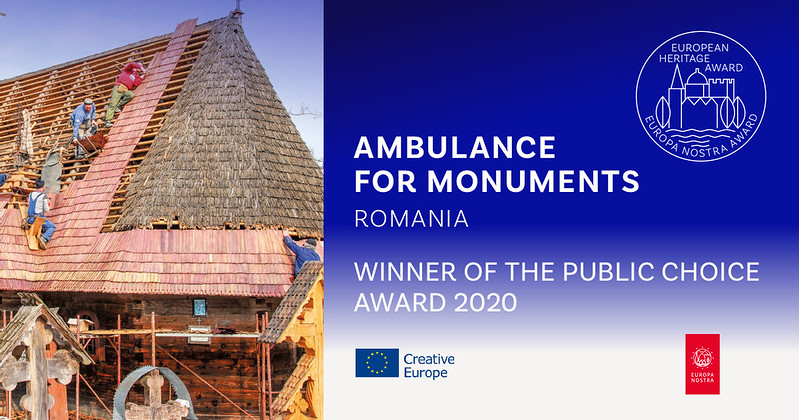 The Ambulance for Monuments project won the Public Choice Award 2020. It received the largest number of votes, cast via an online poll with the participation of over 12,000 citizens from all over Europe.

The President of Romania saluted the public that ranked The Ambulance for Monuments first in their choices. “I believe that many European citizens appreciated the Romanian project as a concrete expression of solidarity and an example for the appropriate use of the civic energies developed by culture and cultural heritage”, affirmed H.E. Klaus Werner Iohannis (read full message in English and Romanian).

The conservation work is carried out by Asociația Monumentum (the owner and developer of the project), Asociația pentru Patrimoniu Activ-PACT, and Asociația Vernacular and Asociația Arhaic. The network is still growing, with a further four organisations joining this year: Asociația Actum; Asociația Inima Olteniei; Asociația Atelierul de Patrimoniu; and Asociația Rost. The project has enjoyed the support of His Royal Highness the Prince of Wales and The Anglo-Romanian Trust for Traditional Architecture.

“The community involvement in heritage preservation, hands-on training of young specialists and focus on sustainability are essential features for the success of our approach to safeguarding heritage. The Award greatly contributes to spreading the word about our mission and strengthens our thoughts to extend the project in other European countries which face a similar abandonment of monuments”, emphasised Eugen and Veronica Vaida, Architects of Asociația Monumentum.