Europe’s top heritage award winners were celebrated with a memorable online Ceremony on 10 November. More than 1,000 people from around the world watched the livestream of the Ceremony to witness the announcement of the three Grand Prix laureates and the Public Choice Award winner, selected from among the 21 winners of the 2020 European Heritage Awards / Europa Nostra Awards, and the unveiling of the two winners of the ILUCIDARE Special Prizes, for excellence in heritage-led innovation and international relations. 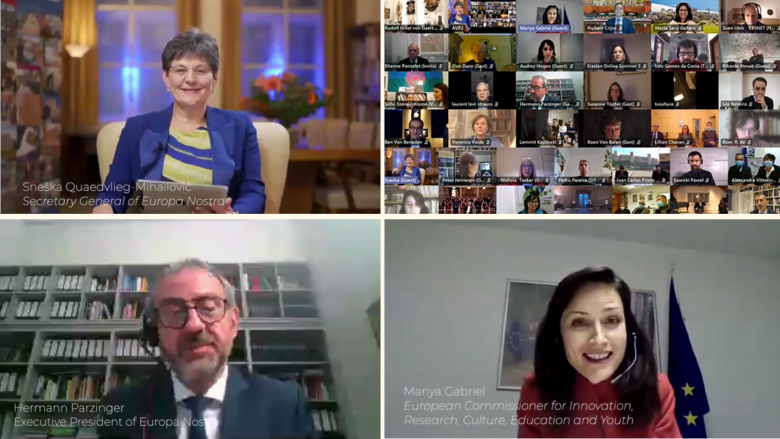 In her opening address, Commissioner Gabriel expressed her gratitude to the laureates for their important work in favour of cultural heritage. “Your projects prove to us how important it is to understand and preserve our past in order to comprehend and build our future. You have our immense gratitude for that. Because with the implementation of your projects you will provide opportunities for European citizens, and especially young people, to closely connect with our rich cultural diversity”, she said.

The Chairs of the Heritage Awards Juries introduced each of the four categories after which each award winner was introduced with a short video that illustrated their respective projects. 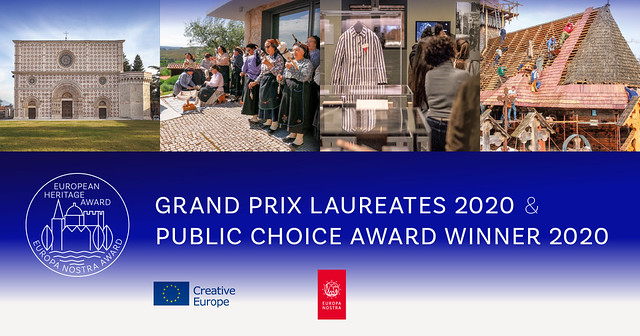 The final top award of the evening was announced by Hermann Parzinger, Executive President of Europa Nostra: the Public Choice Award went to the Ambulance for Monuments from Romania. The project, awarded in the category Education, Training and Awareness-raising, was selected by the general public across the world, over 12,000 of whom voted for their favourites from among this year’s winners.

Their achievement was made all the more special with a personal message of congratulations from His Excellency Klaus Iohannis, President of Romania. In it, President Iohannis wrote: “I warmly congratulate the team that initiated this project. Due to their vision, through the involvement of young people, of the specialists, authorities and sponsors, many monuments at risk have been saved during the five years since The Ambulance exists, thus testing the viability of a model of social cohesion emerging from cultural values and local identity” (read the full message in English here and in Romanian here). 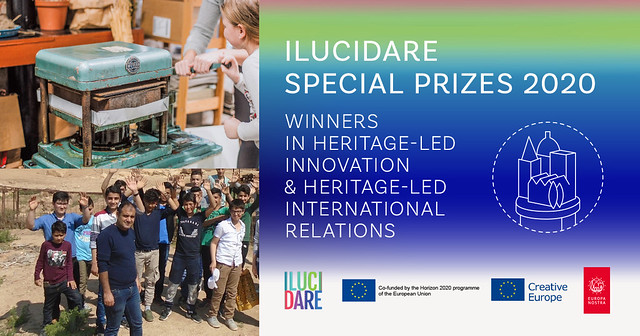 Marco Magnifico, Executive Vice President of Fondo Ambiente Italiano, introduced a specially recorded performance of Ludwig van Beethoven’s string quartet op. 135 by the Quartetto Indaco. The performance, which took place at the Villa Panza, was arranged by Le Dimore del Quartetto, a laureate of the European Heritage Awards / Europa Nostra Awards in 2019. The performance was dedicated to the memory of the late Giulia Maria Mozzoni Crespi, a Grand Prix winner of the Awards in 2016.

The evening was concluded with a performance of Beethoven’s Ode to Joy by the Gypsy Quatuor Roberto de Brasov, a Romanian quartet now living in France. The performance was recorded by the Centre européen de la Musique in Bougival and its President Jorge Chaminé as a contribution to the Ode to Joy Challenge.

Though the Ceremony missed the usual round of applause, the audience, many of whom attended the Ceremony for the first time, shared their messages of congratulations with the winners and their enthusiasm for heritage. One viewer wrote: “I am impressed and feel connected to you all and European thought. That feels very good! Thank you to all the great winners for your fantastic work!”.

The Ceremony was followed by “Meet-and-Greet” the Award Winners online sessions, which provided great opportunities to network, informally exchange and create links with Europe’s most captivating and successful heritage projects in a pleasant and celebratory atmosphere.

Watch the full recording of the Awards Ceremony

Read the booklet about the winners of the Grand Prix, Public Choice Award and ILUCIDARE Special Prizes