The European Heritage Policy Agora “From the New European Bauhaus to the New European Renaissance” was one of the highlights as well as the closing event of the European Cultural Heritage Summit 2021 held from 21-24 September in Venice. It brought together policy-makers at all levels of governance and key heritage stakeholders to reflect on the most topical issues for the cultural heritage ecosystem in Europe. The opening session of the Policy Agora gathered high-profile political representatives, including the President of the European Parliament David Sassoli, the Vice-Presidents of the European Commission Margaritis Schinas and Dubravka Šuica, as well as the Slovenian Minister of Culture and Acting Chair of the EU Council of Ministers Vasko Simoniti. A special address was delivered by Dario Franceschini, Italian Minister of Culture. 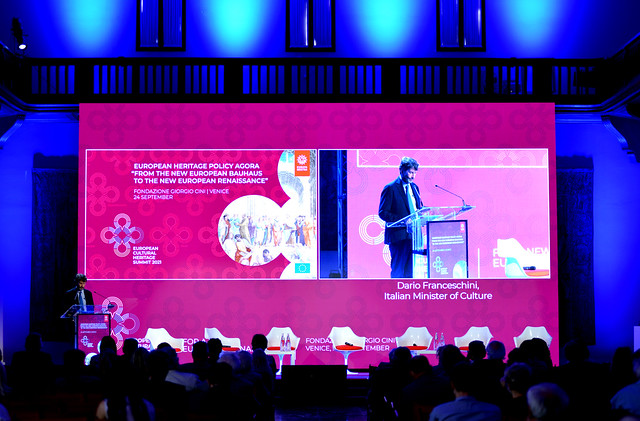 Venetian representatives Paola Mar, Municipal Councillor for Heritage, Territorial promotion and University Relations of the City of Venice, and Paola Marini, Chairwoman of the Association of International Private Committees for the Safeguarding of Venice, also contributed to the opening session, which The was moderated by Sneška Quaedvlieg-Mihailović, Secretary General of Europa Nostra.

During the opening session of the Policy Agora, high-profile representatives of EU institutions, national and local administrations as well as representatives of the partners of the Summit reflected on the following questions: What could we envisage for this new chapter of our shared European history? How to achieve a more sustainable and inclusive future of the European project and what role can cultural heritage play in it? What can be the contribution of cultural heritage to the Conference on the Future of Europe?

Participants were welcomed with a powerful video message by David Sassoli, who applauded the choice of Venice as the host city of the Summit, a place that is highly symbolic for the richness of its cultural heritage but also for the challenges it faces for its preservation and for its very existence. The President of the European Parliament stressed the need to invest in cultural heritage as a “transversal sector, a vector between our policies and the commitment of our citizens to achieve that just transition of our societies and our economy towards a more sustainable model”. Read the full speech here. 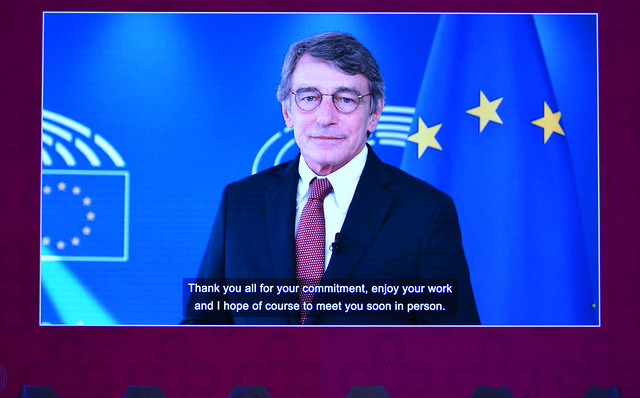 During his opening address, Margaritis Schinas, Vice-President of the European Commission, stressed the vital role of arts, creativity, culture and heritage to help citizens cope with the unprecedented crisis caused by COVID-19 and improve their wellbeing and resilience. He also highlighted “the esthetic, ethical and ecological values of Europe as the red thread of a New European Renaissance and as the basis of what keeps Europe together”.

@MargSchinas, Vice-President for Promoting our European Way of Life, states “I am delighted to have the opportunity to be among the Europa Nostra family, from a geographical distance, but very close to their exceptional work, carried in close cooperation with the @EU_Commission.” pic.twitter.com/ke9FnKWJzI

Vasko Simoniti, Slovenian Minister of Culture and Acting Chair of the EU Council of Ministers, called for “a creative balance between economics and ecology in all our reflections on the future of Europe”, which should be based on respect for humankind, its cultural heritage and the environment. He reaffirmed the commitment of the Slovenian Presidency of the Council of the European Union towards culture and cultural heritage both as a driver for sustainable development and as a basic human right.

The #EuropeanHeritageSummit is held under the patronage of @EU2021SI & we are grateful to Vasko Simoniti, 🇸🇮 Minister of Culture & Acting Chair of the EU Council of Ministers for his powerful message & the appreciation of our work. pic.twitter.com/vRPRsREiFp

Dubravka Šuica, Vice-President of the European Commission, then took the floor to express her vision on the Conference on the Future of Europe as a unique opportunity to empower citizens to have a greater say in the future of the European Union, with a particular focus on young people and “leaving no one behind”. The Conference on the Future of Europe, which has culture as a key point “should reach out to everyone: from mountains to islands as well as cities like Venice, which symbolise so well Europe’s cultural heritage”, she stated.

Honoured to speak at #EuropeanCulturalHeritage Summit in the iconic city of Venice.#CoFoE must reach out to everyone, from the mountains to the islands. Including emblematic cities like Venice, which represent so much of our precious cultural heritage. @europanostra pic.twitter.com/ADy753PSIc

In his special address, Dario Franceschini, Italian Minister for Culture emphasised: “Culture has a fundamental role in the future of the European project. (…) Not only are the cultural and creative sectors important economic drivers in themselves, but they are crucial if we want to launch a genuine ‘European Renaissance’.“. He recalled that these key messages were also conveyed during the G20 Culture Ministerial meeting held in Rome on 29 and 30 July 2021, under Italy’s Presidency, and have been enshrined in the G20 Culture Rome Declaration. Read the full speech here. 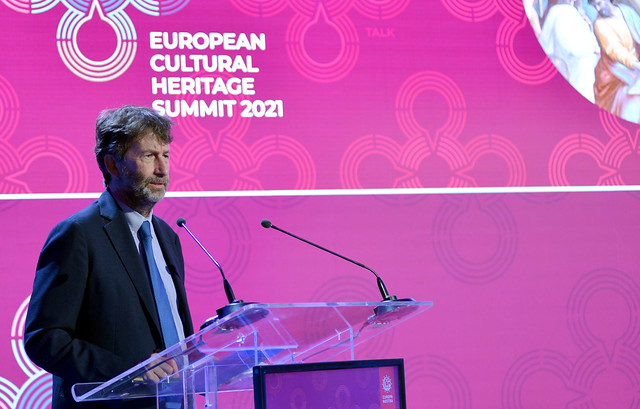 Paola Mar, Municipal Councillor for Heritage, Territorial promotion and University Relations of the City of Venice, welcomed participants on behalf of the Venetian local authorities. During her intervention, she called for a humanistic and interdisciplinary long-term vision for Venice, stressing: “Venice can be a laboratory and a starting point for the re-launch of our cities in the post-pandemic future”.

Paola Marini, Chairwoman of the Association of International Private Committees for the Safeguarding of Venice, one of the main partners of the European Cultural Heritage Summit 2021, started by thanking Europa Nostra for the excellent partnership that made this five-day event possible. She stressed that Venice, more than any other city, calls for a balanced interaction between continuity and change, architecture and nature, past and future. She called for a holistic and integrated approach for the city of Venice, considering its heritage, its Lagoon and its inhabitants.

Paola Marini, Chairwoman of #EuropeanHeritageSummit partner Assoc. of International Private Committees for Safeguarding of Venice recalls the “need for the city of stone -its heritage- to be considered together w/ the city of water -its Lagoon- & the city of flesh-its people”. pic.twitter.com/QMDD68a0p0

The interventions provided useful insights on the role of cultural heritage for tackling some of the most pressing challenges facing Europe and its citizens, and reaffirmed the significance of shared heritage assets for the future of the European project.