Home News Historic Stage Machinery of the Bourla Theatre in Antwerp: a success story of our 7 Most Endangered programme

The Historic Stage Machinery of the Bourla Theatre in Antwerp, listed among the 7 Most Endangered heritage assets in Europe in 2014 by Europa Nostra and the European Investment Bank Institute, is now the protagonist of a success story. Built in 1834, the Bourla is the last remaining municipal theatre in Europe with original stage machinery, created by the French company Philastre and Cambon. Extensively renovated in 1865 and saved from demolition in 1993, the Bourla is now waiting for its third major rehabilitation. As announced at a press conference held at the Bourla Theatre on 24 October, the Flemish Community and the City of Antwerp are financing the conversion of the Bourla into a contemporary theatre with respect for the past. 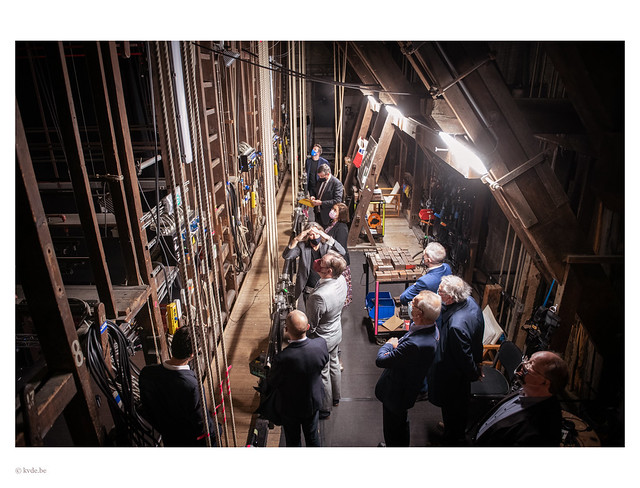 The renovation of the Bourla theatre bears an estimated total cost of 67 million euros. The design is to be fully worked out during the present legislature and made ready for tendering. The fully renovated theatre is expected to reopen in 2026.

“Just a few years ago, the Bourla Theatre was on the list of Europe’s 7 most endangered heritage sites. Today we are propelling this unique theatre house into the 21st century. We have come up with a good compromise between preserving the authentic theatre machinery and accounting for the needs and ambitions of the internationally renowned resident company of contemporary theatre Toneelhuis. Finally, we are giving the Bourla back to the city: the original entrances on the sides of the theatre will be reopened and the ‘salons’ will be restored as contemporary spaces next to the Foyer,” said the Alderwomen for Culture Nabilla Ait Daouad during the press conference. Europa Nostra was represented at the event by its Vice-President Piet Jaspaert. 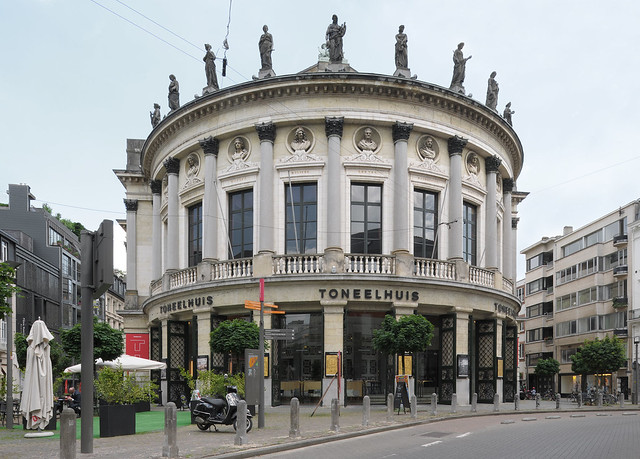 Minister-President Jan Jambon stated: “This is one of our top cultural projects, for which we are putting our shoulders to the wheel with great enthusiasm.”

The Mayor of Antwerp Bart De Wever commented: “I am delighted that the Bourla Theatre is joining the list of historic gems being restored in Antwerp. By making the Bourla ready for the future, we can view our rich heritage with greater pride than ever.” 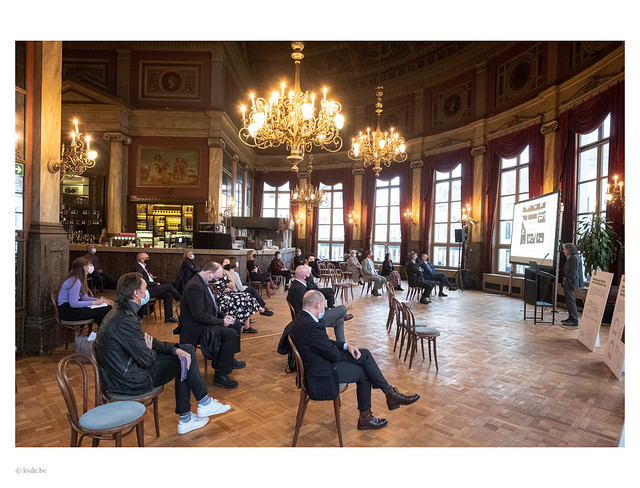 The story behind this decision started in 1987 when, thanks to the nomination of Antwerp as European Capital of Culture 1993, a budget became available for the restoration of the Bourla Theatre. At that time the idea was to introduce a new modern stage machinery alongside the existing historic one. However, the resident theatre company Toneelhuis never made use of the historic machinery and preferred to have it dismantled in order to renovate their own machinery and win storage space.

In 2013, a feasibility study ordered by the City of Antwerp, clearly expressed a preference to dismantle the historic theatre machinery, opting for a completely modern solution. This was the reason why PERSPECTIV – Association of Historic Theatres in Europe, in collaboration with OISTAT – International Organisation of Scenographers, Theatre Architects and Technicians decided to nominate the Historic Stage Machinery of the Bourla Theatre in Antwerp for the 7 Most Endangered programme 2014.

Although this nomination wasn’t appreciated by the City of Antwerp and the theatre management at first, our project team succeeded in holding a dialogue with the stakeholders involved. Following the listing of the Historic Stage Machinery of the Bourla Theatre, Europa Nostra and the European Investment Bank Institute organised a mission onsite and a joint visit with the main partners to exemplary cases of renovation of historic theatres in England.

Soon after, the Antwerp city authorities reached an agreement for a long-term vision to transform the 19th century Bourla into a modern theatre that functions in a contemporary manner without losing its incontestable importance as a valuable cultural heritage site. To achieve this, DRDH Architects and Julian Harrap Architects were commissioned by the City of Antwerp and Toneelhuis to draw up a masterplan for the Bourla in collaboration with Flanders Heritage Agency. This masterplan for the restoration and renovation of the whole theatre was approved by the authorities in 2016. This masterplan shows that it is possible to appropriately interweave the Bourla’s valuable and rare historical heritage with the ambitions and needs of Toneelhuis as a contemporary theatre company.