The text of the tribute was written by Álvaro Fernández-Villaverde y Silva, Marqués de Santa Cruz, former Vice-President of Europa Nostra, and Hispania Nostra, Europa Nostra’s Country Representation in Spain, and read during the General Assembly of Europa Nostra by its Secretary General. 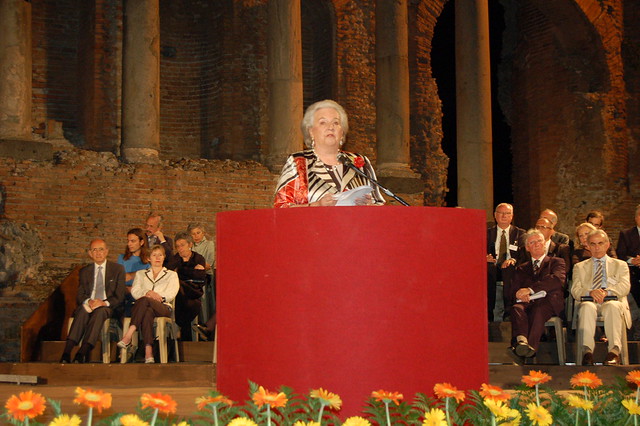 HRH the Infanta Doña Pilar de Borbón was elected President of Europa Nostra during the General Assembly on 6 June 2007 in Stockholm taking over the position from late HRH the Prince Consort of Denmark. Throughout her presidency, she led our organisation with great competence and success.

Though she has spent only two years at the helm of our organisation, thanks to her leadership, wisdom and elegance, Doña Pilar left us with an important legacy. It is under her able Presidency that Europa Nostra completed the necessary reform of its governance and thus became better prepared to meet the many challenges ahead of us. We are therefore very grateful to Doña Pilar for the charm and firm hand with which she helped Europa Nostra to maintain its sense of purpose and direction during this entire reform process. She stepped down as President in June 2009 in Taormina and was replaced at the helm of Europa Nostra by her compatriot, Maestro Plácido Domingo.
Europa Nostra remains deeply indebted to HRH the Infanta Doña Pilar who will be remembered as an extraordinary woman and leader.