The online New European Bauhaus (NEB) Conference which took place on 22-23 April 2021 was the first online large-scale event organised by the European Commission on this initiative. Over two days, it gathered more than 8,000 participants engaging in a programme full of inspiring panel discussions and workshops, also marking the official launch of the NEB Prizes. Speakers included top EU leaders and EU institutions representatives, as well as representatives of the New European Bauhaus High-Level Roundtable and the business world. As an official NEB partner, Europa Nostra was invited to co-facilitate a workshop on “Rediscovering the Sense of a Place” and to report on the discussion outcomes during the second day of the conference.

Opening the conference, the President of the European Commission Ursula von der Leyen highlighted in her remarks that the main objective of the initiative is to add a much-needed cultural dimension to the European Green Deal so it reaches the hearts and souls of citizens. “The New European Bauhaus is about hope. It is about inspiration. It is about new perspectives; and it’s about concrete actions against climate change”, she stated.

The #NewEuropeanBauhaus is about hope and new perspectives.

It aims to reach people’s hearts and souls.

So the necessary transition towards a climate-neutral Europe becomes a true cultural movement.

Tune in to the #NewEuropeanBauhaus conference!

In his speech, the President of the European Parliament, David Sassoli, particularly welcomed the bottom-up, inclusive and democratic nature of the New European Bauhaus initiative, and the association of a cultural, social and societal reflection with the European Green Deal. “For the first time in the history of the institutions, the Commission is proposing a co-creation and co-design approach to the implementation of this project, opening up a space for dialogue with citizens, businesses, organisations and stakeholders”, he said.

Pleased to participate in today’s panel at the #NewEuropeanBauhaus Conference! 🏡

Get ready to transform our daily lives! pic.twitter.com/Qsydzi3MS9 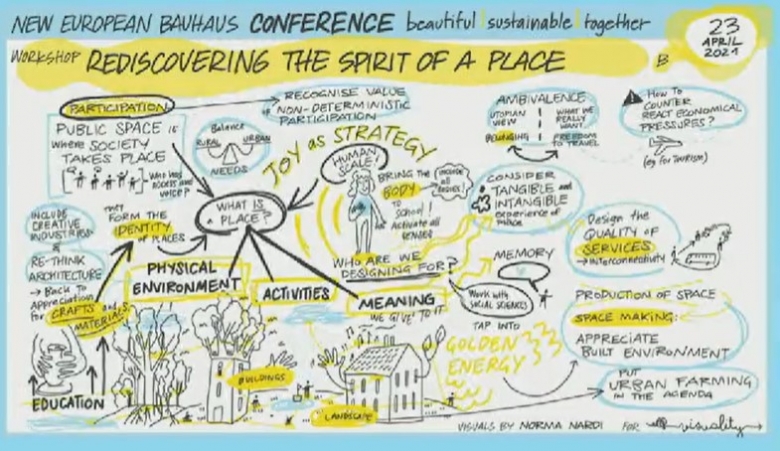 Participants shared their engaging views and ideas, which were put together in the drawing above by a mind-mapper. These included the sense of belonging linked to a place with its cultural heritage, history and memory as well as the importance of education, participation, accessibility and multiperspectivism, the appreciation of crafts and skills, quality of services and adaptive re-use. They concluded that embracing the spirit of a place provides an opportunity to create a more beautiful and sustainable future, provided that the needs of citizens are duly taken into account and that solutions are formulated on the basis of the quest for beauty and high quality.

The outcomes of the workshops were then shared by the facilitators during the public session “Harvesting ideas from the co-creation workshop” moderated by the members of the NEB High-Level Roundtable Francesca Bria, President, Italian National Innovation Fund, CDP Venture Capital, and John Schellnhuber, Founding Director of the Potsdam Institute for Climate Impact Research & Former Chair of the German Advisory Council on Global Change. Holistic approach as well as positive energy and determination to shape spaces which bring beauty, hope and joy to people’s lives were the words used by Europa Nostra’s Secretary General Sneska Quaedvlieg-Mihailovic during her intervention to describe the key messages of the workshop. She stressed the interconnection between quality of architecture, design, cultural heritage and experiences to rediscover the spirit of a place, highlighting that “We need to rethink in a holistic way, to reconnect to citizens, nature and our senses to improve our way of living together“.

🗣️”We need to rethink in a holistic way, to reconnect to citizens, nature & our senses to improve our way of living together”. At #NewEuropeanBauhaus Conference, our SG @SneskaEN & Pia Maier Schriver presented the conclusions of workshop on “Rediscovering the Sense of a Place” pic.twitter.com/0ewrppnUCM

The second day of the conference was also marked by the official launch of the New European Bauhaus Prizes. The Prizes recognise and celebrate existing achievements and support the younger generation to further develop emerging concepts and ideas, both EU-based.

The 10 categories include one directly linked to cultural heritage and many others with great relevance to cultural heritage: 1. Techniques, materials and processes for construction and design; 2. Buildings renovated in a spirit of circularity; 3. Solutions for the co-evolution of the built environment and nature; 4. Regenerated urban and rural spaces; 5. Products and lifestyle; 6. Preserved and transformed cultural heritage; 7. Reinvented places to meet and share; 8. Mobilities of culture, arts and communities; 9. Modular, adaptable and mobile-living solutions; and 10. Interdisciplinary education models.

In each of the categories, there are two parallel competition strands: New European Bauhaus Awards for existing completed examples/projects, and New European Bauhaus Rising Stars for concepts or ideas submitted by young talents aged 30 or less. The deadline for submission is 31 May and more information can be found here.