On 5 March, the European Commission revealed the first 13 selected partners of the New European Bauhaus initiative, among which proudly figures Europa Nostra as the European Voice of Civil Society committed to Cultural Heritage. Launched by the President of the European Commission Ursula von der Leyen in September 2020, the New European Bauhaus aims at bringing the European Green Deal closer to citizens and their living spaces by bridging the world of science and technology with the world of art and culture. This creative and interdisciplinary movement shall gather designers, architects, engineers, scientists, students and creative minds across disciplines to imagine our collective future around the core values of sustainability, aesthetics and inclusiveness.

The #NewEuropeanBauhaus is here with an ambition to:
🔗connect #arts & #sciences
💡reimagine our ways of living
✳️bring #EUGreenDeal closer to the hearts of people

The New European Bauhaus is being developed following a bottom-up approach and is currently in its “co-design” phase, which was launched on 18 January 2021 by the two responsible EU Commissioners: Mariya Gabriel, EU Commissioner for Innovation, Research, Culture, Education and Youth, and Elisa Ferreira, EU Commissioner for Cohesion and Reforms. This first phase shall lead to shaping the concept by exploring ideas, identifying the most urgent needs and challenges, and connecting interested parties. 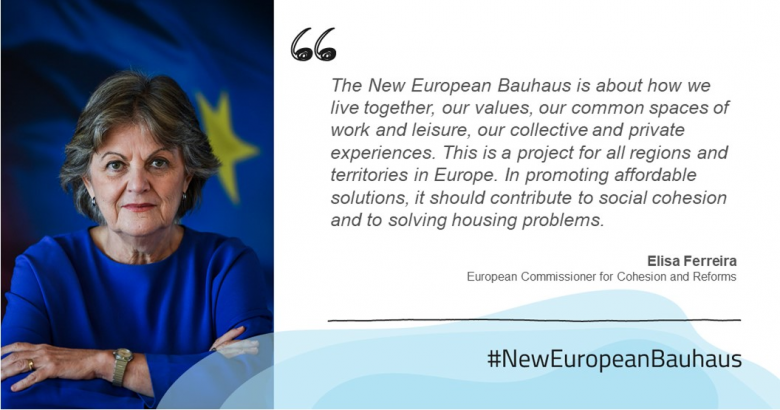 As one element of the co-design phase, organisations across Europe, whose core activities are relevant to one or more dimensions of the New European Bauhaus, have been invited to become Partners of the New European Bauhaus to “act as promoters, community managers, sounding boards and key interlocutors throughout the development of the initiative”.

The outcome of the co-design phase will include a call for proposals for five pilots projects in different EU Member States as well as Special Prizes awarded in Summer 2021 to existing contemporary examples illustrating the integration of the key values of the initiative.

With its wide network of members and partners across the European continent, large outreach capacity and related expertise, Europa Nostra was particularly pleased and honoured to have been selected among the 13 first partners of the New European Bauhaus. These leading European organisations include the Aalto University, the Architects’ Council of Europe (also a member of the European Heritage Alliance, which Europa Nostra coordinates), the Active House Alliance, Ars Electronica, the Bureau of European Design Associations, conexiones improbables, the New European Bauhaus Collective, ONCE Social Group, PPNT Gdynia | Design Centre, Rio Neiva, TREBE and the Triennale Milano.

Honoured & thrilled to be among the first 13 partners of the #NewEuropeanBauhaus initiative by @EU_Commission! Together with our #NEB partners & vast network, we will strive to use the full potential of #CulturalHeritage to co-create a more inclusive & sustainable Europe! 🇪🇺 https://t.co/jScyBNfLaD

As an official partner, Europa Nostra commits to duly include cultural heritage as an integral part of the New European Bauhaus (read our related statement issued in December 2020 and conveyed to the European Commission President Ursula von der Leyen) and advocate the need for a heritage-led transformation of our society, economy and environment. Europa Nostra is aware of the great challenge and responsibility this partnership entails, and will strive to align all its activities to the values and aims of this initiative. Our organisation shall notably contribute with the following instruments.

– Widely disseminating and using the “European Cultural Heritage Green Paper” (to be presented on 22 March) – produced by Europa Nostra in close cooperation with ICOMOS and the Climate Heritage Network, with input of members of the European Heritage Alliance and with the support of the European Investment Bank Institute – as a policy and advocacy document demonstrating that our cultural and natural heritage resources are key to achieving the ambitious goals of the European Green Deal and ensure its lasting impact. The Paper also recognises the New European Bauhaus as an important linkage between the European Green Deal and the realm of culture and provides recommendations on how to effectively link these policy priorities to cultural heritage.

– Generating and mobilising knowledge together with our large network of professionals, students and volunteers from the wider heritage ecosystem, including, among others, experts and activists related to the fields of architecture, urban/regional development, climate change, wellbeing, education, traditional craftsmanship, as well as the laureates of the European Heritage Awards / Europa Nostra Awards and members of the European Heritage Alliance. We shall encourage them to actively contribute by submitting inspiring ideas and projects and hosting citizens conversations and debates.

– Engaging citizens by stimulating and animating a series of intergenerational citizen debates throughout Europe in heritage sites as inspirational places to exchange ideas, gather expectations and find sustainable solutions together. These transdisciplinary debates shall be driven by issues at the core of the New European Bauhaus initiative, and shall also contribute to the Conference on the Future of Europe, which will have sustainability as one of its priorities.

– Identifying and disseminating best practices in the heritage field that represent the values and ideals of the New European Bauhaus, such as adaptive re-use of historic buildings, heritage-led innovation, sustainable urban and rural development, as well as the preservation of historic settings and remains in a contemporary context, notably via the European Heritage Awards / Europa Nostra Awards, organised in cooperation with the European Commission since 2002. Similarly, good practices at the local and regional level can be identified and promoted via the peer-learning project “Cultural Heritage in Action”, financed by the Creative Europe programme of the European Union, of which Europa Nostra is a partner.

Europa Nostra’s overall contribution to the New European Bauhaus will be based on the firm conviction that Europe’s cultural heritage offers an inspiring framework for social cohesion and sustainable lifestyles which contribute greatly to the wellbeing of citizens and their communities. We shall also actively promote the principles of the Davos Declaration 2018 on “high quality Baukultur for Europe”, which emphasizes the outstanding importance of the quality of our built environment for shaping a greener and more sustainable common future.