Europa Nostra held a panel discussion with representatives from the worlds of culture, politics and business to promote the role of culture and heritage within the ‘New Narrative for Europe’ and the wider process of European integration at the Dorotheum in Vienna in the afternoon of 4 May. Around 200 people participated in the event. Proposed by the European Parliament and implemented by the European Commission, the ‘New Narrative for Europe’ initiative has engaged artists, scientists and intellectuals in a debate on the future of Europe since April 2013. Europa Nostra has contributed to this initiative since its launch. 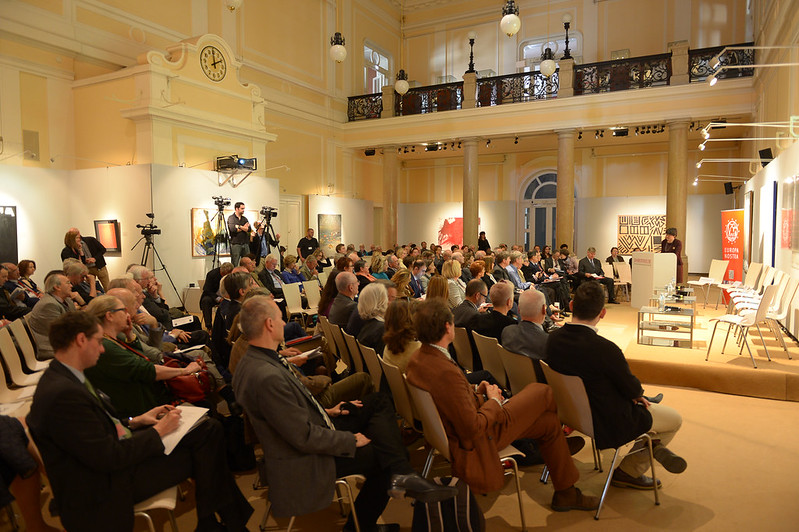 The New Narrative for Europe initiative was launched by the European Commission’s President José Manuel Barroso, together with Vice-president Reding and Commissioner Vassiliou, in Brussels on 23 April 2013. Three major public gatherings, hosted by President Barroso, were held in Warsaw with Prime Minister Tusk (11 July 2013), in Milan with the then Prime Minister Letta (8-9 December 2013) and in Berlin with Chancellor Merkel (1 March 2014). At the general assembly in Berlin, the Cultural Committee steering the project presented the final Declaration on the ‘New Narrative for Europe’, entitled “The Mind and Body of Europe”. The Declaration defines Europe as a state of mind and a moral and political responsibility shared by citizens across the continent. It reminds us of Europe’s common values that attract multitudes of people. It is an appeal for a scientific and artistic renaissance which needs brave leaders and committed citizens.

“Three weeks ahead of the European Elections, we felt that an organisation such as Europa Nostra, which is a citizen’s movement, also ought to get engaged on the debate over the type of Europe that we want, and what role culture and cultural heritage should play in this context. The Declaration presented in March is not the end of the process. It is an incentive to engage European citizens in the debate. It is time for all European citizens, and especially those active in the field of culture, to speak up,” stated Sneška Quaedvlieg-Mihailović, Secretary General of Europa Nostra and member of the Cultural Committee for the ‘New Narrative for Europe’, who moderated the panel discussion.

The following overview of questions and answers illustrates the thoughts and ideas exchanged during this panel discussion.

Q: Has the ‘New Narrative for Europe’ initiative lived up to your expectations until now?
A: Androulla Vassiliou, European Commissioner for Education, Culture, Multilingualism and Youth (Cyprus)
“We launched this initiative with the aim of mobilising the tremendous force of the artists, intellectuals and scientists. We made an important step forward but we have to engage more this community. Citizens may not wish to listen anymore what the politicians or the technocrats have to say; but they will listen to the voice of the artists.”

Q: Is there a political message in your work, through your light installations, that you want to pass to Europe today?
A: Victoria Coeln, Visual Artist (Austria)
“Art is a powerful tool which connects people beyond boundaries and should be used at an official level to strengthen and promote Europe’s unity in diversity.”

Q: Why is it that culture is not mentioned in any of the programmes of the European political parties for the European Elections?
A: Hannes Swoboda, Member of the European Parliament (Austria)
“First of all, we no longer teach History in a broad sense. If you are not aware of the historic development of Europe, which comprises different cultures and influences, then you forget about the values of culture and heritage. Secondly, we are too focused on the economics. If you think all the time about budgets, jobs and social elements, you forget about culture. Thirdly, perhaps we haven’t yet argued enough about the economic impact of our heritage, not only by restoring the monuments and sites but also by developing tourism activities. There is still much more to be done at the European Parliament. Culture doesn’t concern just the cultural committee but also the economic, social and tourism committees. Only then we can really bring forward culture as central element of the European project.”

Q: How can we get more attention and support for culture in Europe?
A: Erhard Busek, Chairman of the Advisory Board of the ERSTE Stiftung and Chairman of the Institute for the Danube Region and Central Europe (Austria)
“Many national governments want to protect their rights and they don’t understand that we have a common fate as Europeans. We have to monitor the national governments in order to ensure that they are going in the right direction. It is a mistake to think that culture is not a direct responsibility of the European Union institutions. Culture is undoubtedly a common objective and duty, also of the EU institutions. The members of the European Parliament together with all EU institutions have to fight for this cause.”

Q: What is the importance that the corporate sector attaches to the call for more culture in Europe?
A: Irene Braam, Vice-President for Government Relations of Bertelsmann (Germany)
“I really do hope that the Declaration on the ‘New Narrative for Europe’ might be the beginning of a wider dialogue about Europe. Our company produces a great variety of cultural products for European audiences. We are also very much engaged in preserving cultural heritage. We are currently very active in film restoration. Another example is the opera archives. We are in process of indexing, restoring and digitizing Verdi’s opera archives: not only because we want to make them available to the wider public but also because we want to learn more about the composer and his time. If we teach the young people the core values of Europe, while relating them to important personalities from the cultural and creative worlds, we may be able to make the youngsters more enthusiastic about the European project.”

Q: Does the new generation have a European dream? What is it?
A: Stefan Windberger, Member of Alpbach Initiative Group in London (Austria)
“It is important for young people now – in times of crisis – to stand up and say: yes, we do want the united states of Europe; yes, we do want further integration. In Austria, 75% of people participated in the national elections; 45% participated in the European Elections; but only 10% of youngsters took part in. If you can’t convince the young people to believe in Europe, the EU is quite lost. That’s why it is vital for young people to speak up for Europe. One in every three Europeans is under 30-years-old; the EP has 766 members; and only four of them are under 30. This is a huge gap; it would be good to have a few more young people in the European Parliament standing up for young people.”

Q: For a young European from Ukraine, in these difficult times, what role does culture have to play for the future of Europe and for the peaceful future of your country and the entire continent?

A: Natalia Lukianets, Member of the Alpbach Initiative Group in Kiev (Ukraine)
“The diversity of our cultures is our richness. We speak different languages but we live in one country and we call ourselves Ukrainians. Despite being so diverse, Ukraine wants to stay united. Ukrainian people have stood up for Europe; we clearly demonstrated that we want to take part in the common European future. Ukraine belongs to Europe. I seize this opportunity to ask you – the citizens of Europe – to support us: talk about us, don’t forget Ukraine. Let’s feel the responsibility for each and every European country.”

Q: What would you like to add to the debate?
A: Denis de Kergorlay, Executive President of Europa Nostra (France)
“A well-known French political scientist, Dominique Moisi, wrote a book called ‘The Geopolitics of Emotion’. In this book, he shows how the geopolitics of today is characterized by a “clash of emotions”. According to him, the Western world is dominated and divided by fear; in the Arabic and Islamic world, a culture of humiliation is quickly devolving into a culture of hatred; and in Asia there is a new culture of hope. When discussing the future of Europe, we indeed have to take emotions into account. If we want to engage once again with our European compatriots in the European dream, we have put the finger on the right emotions and we have to find the right words. We have to transform the politics of fear into the politics of hope. That is why the New Narrative for Europe is so important.”

This panel discussion was an integral part of the Europa Nostra’s General Assembly and was attended by around 200 people.