On 3 April 2022, Maestro Plácido Domingo, Honorary President of Europa Nostra, attended as a “Grand Témoin” the launch event of the Network of the Houses and Museums of European Musicians, which took place in Bougival, near Paris. This pan-european event was organised by the European Music Centre (Centre Européen de Musique) in collaboration with Europa Nostra, its main European partner. Maestro Domingo was accompanied by our Secretary General Sneška Quaedvlieg-Mihailović, our Board member Huub Doek, as well as other members and friends of Europa Nostra.

The event had the participation of representatives of musicians’ houses and museums from the Island of São Jorge (Azores) in Portugal to Turku in Finland, from Norway to Serbia. On this occasion, some 40 houses, museums and partner institutions from more than 20 European countries signed (in person or online) the Charter on the creation of this new European cultural network. Other members are expected to join the network in the near future. 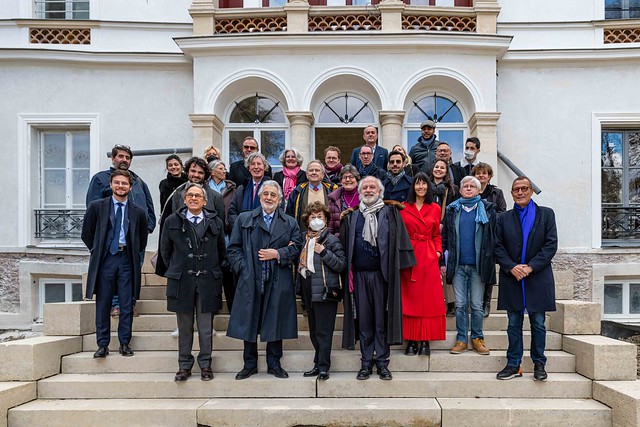 This initiative, led by Jorge Chaminé, President and Founder of the European Music Centre, is in line with one of the pillars of the French Presidency of the Council of the European Union: “The Europe of Musicians exists because music has shaped Europe! We must promote a feeling of belonging to the European cultural space, a feeling that has been shaped and shared by great musicians for centuries. With this network, we want to strengthen and broaden connections within Europe and with its neighbourhood. Music can and must play this vital role as a bridge between cultures and generations as well as a vehicle for a much-needed dialogue between many disciplines”, said Jorge Chaminé.

Maestro Domingo expressed his strong support, both as musician and as Honorary President of Europa Nostra, to the Network of the Houses and Museums of European Musicians: “I firmly believe in the importance of music as a link between people, generations and cultures. This new network is much needed to defend our European musical heritage, but also to open perspectives for real cooperation between its members, thus giving an even greater strength to the feeling of our shared European identity, of our belonging to a wider European family.”

“In this semester of the French Presidency of the Council of the European Union, we warmly welcome this wonderful initiative, whose main objective is to promote and strengthen the feeling of belonging to Europe’s common culture and cultural heritage, which are the very foundation of Europe. This objective also corresponds to the mission and raison d’être of Europa Nostra, which explains our great enthusiasm for the creation of the Network of the Houses and Museums of European Musicians with Bougival – where the Villa Viardot and the Maison Bizet are located – at its centre”, added Sneška Quaedvlieg-Mihailović, Secretary General of Europa Nostra.

For more information about the network and its objectives, read the related press release.

European messages of support and congratulations were conveyed by Mariya Gabriel, European Commissioner for Innovation, Research, Culture, Education and Youth (listen to the audio message); Stéphane Bern, responsible for the “Mission Bern”, journalist, radio and television presenter and writer, France (watch the video); Carlos Moedas, Mayor of Lisbon, Portugal (watch the video); and Marcos Ros Sempere, Member of the European Parliament, Spain (watch the video). Participants were also greeted by Luc Wattelle, Mayor of Bougival, and Joséphine Kollmannsberger, Vice-President of the Yvelines Departmental Council responsible for the Environment, Culture and Tourism.

Maestro Plácido Domingo and the delegation of Europa Nostra had the opportunity to see the ongoing complex renovations of the Villa Viardot, guided by the Chief Architect of Historic Monuments Gabor Mester de Parajd. They also visited the European Museum of Ivan Tugeniev and the House of Georges Bizet (watch the short video statement made by Maestro Domingo after having visited the Villa Viardot and the House of Bizet).

On this occasion, operational partners of the future European Music Centre presented the future project, developed in line with the principles of the New European Bauhaus. The partners were the property developer Linkcity, the tourist and cultural operator Opérel, and two architectural firms, namely Devillers & Associés from France and Snøhetta from Norway. Snøhetta was represented in person by its founding partner, the architect Kjetil Thorsen, creator of architectural masterpieces like the Oslo Opera House (winner of the EU Prize for Contemporary Architecture / Mies van der Rohe Award in 2009) or the Library of Alexandria in Egypt.

Plácido Domingo and Europa Nostra have been long-standing supporters of the European Music Centre. Maestro Domingo visited the city of Bougival for the first time on 19 June 2016. He supported the preservation of Bougival through a letter sent to the French authorities in July 2016 and by giving his high patronage to the crowdfunding campaign for restoring these heritage sites for the use by the future European Music Centre. On 29 October 2019, in the frame of the European Cultural Heritage Summit 2019 in Paris, a high-level delegation of Europa Nostra visited Bougival to launch the restoration of the Villa Viardot, listed in 2018 among the most iconic heritage sites in danger in France in the frame of the special mission that was granted to Stéphane Bern by the President of the French Republic, Emmanuel Macron.

Watch a video summary of the event: