The winners of the 2019 European Heritage Awards / Europa Nostra Awards, Europe’s top honour in the field, were celebrated on 29 October with the Grande Soirée du Patrimoine Européen at the recently restored Théâtre du Châtelet in Paris. Following the announcement of the 7 Grand Prix laureates, Stéphane Bern, entrusted by the President of the French Republic with a Special Mission for endangered heritage, who also won an Award in 2018, announced the winner of the 2019 Public Choice Award: the Fortified Settlement of Mutso in Georgia. Taking place in the frame of the European Cultural Heritage Summit in Paris (27-30 October), the Grande Soirée was the largest public event and attended by a very special guest: the President of Georgia H.E. Salomé Zourabichvili. 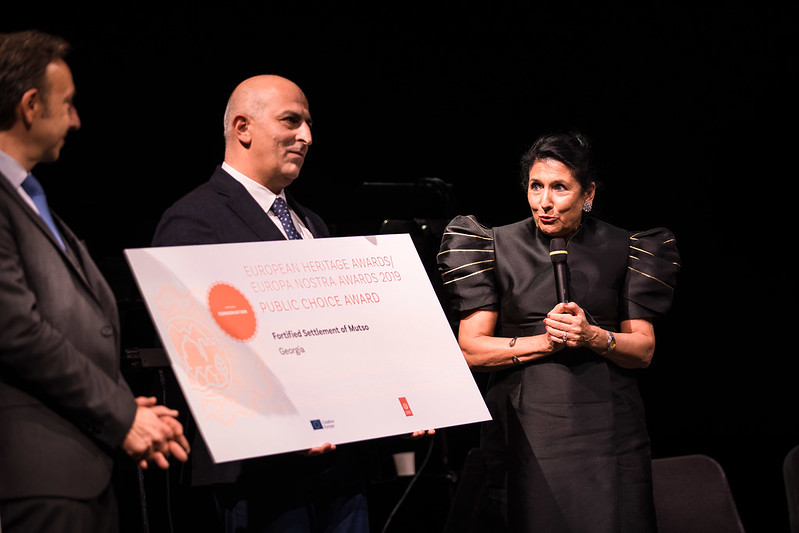 Before concluding an unforgettable evening and revealing which of these extraordinary heritage projects has won the hearts of Europeans, Stéphane Bern paid tribute to all heritage professionals and volunteers who work tirelessly to preserve our heritage. “Behind each project, behind each monument, behind each stone, there is above all a human adventure. What we are celebrating this evening are not only the projects to safeguard our European cultural heritage, but also the men and women who fight on a daily basis, often on a voluntary basis, who spare neither their time nor their means to defend this heritage,” he stated. 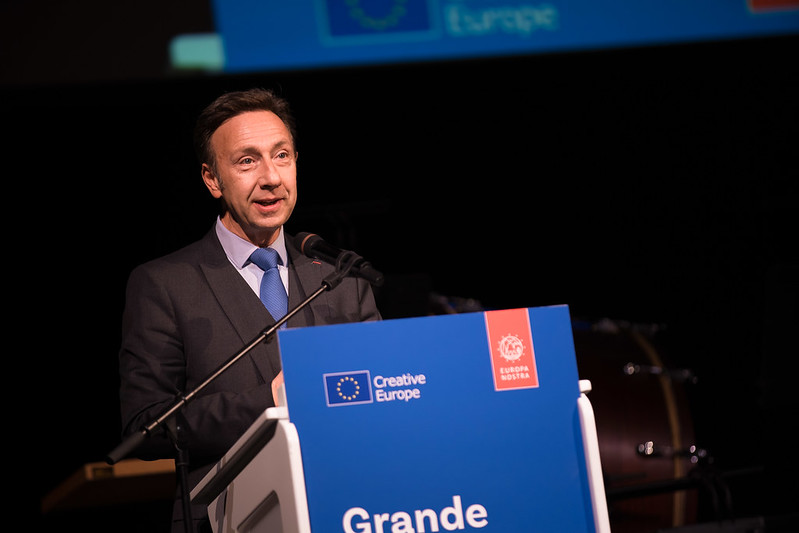 He then announced the top three projects in the ranking of the Public Choice Award 2019, which were chosen by the 8,500 people who voted via an online poll conducted by Europa Nostra. This was an opportunity for many projects to campaign creatively and actively on social media and increase the visibility of their projects throughout Europe.

1st position and winner of the Public Choice Award 2019: the Fortified Settlement of Mutso in Georgia (Category Conservation), where an online voter felt “Spirituality, peace of mind, serenity, lost between the wind, flowers, stones, and centuries”

The President of Georgia H.E. Salomé Zourabichvili joined on stage Stéphane Bern and Plácido Domingo, President of Europa Nostra, to hand the Award to the representative of the project, Nikoloz Antidze, Head of the National Agency for Cultural Heritage Preservation of Georgia. After thanking the public, the President invited everyone to visit this marvellous village where one can experience another century, another world. She added: “I would like to pay tribute to the author of this dream who is no longer with us today, and who would have never imagined that one day at the Théâtre du Châtelet in Paris, his project would win the public’s attention. Someone said: Recommençons par la culture. Georgia will join Europe through culture and I invite you to hold a European Cultural Heritage Summit in Georgia as soon as possible.” 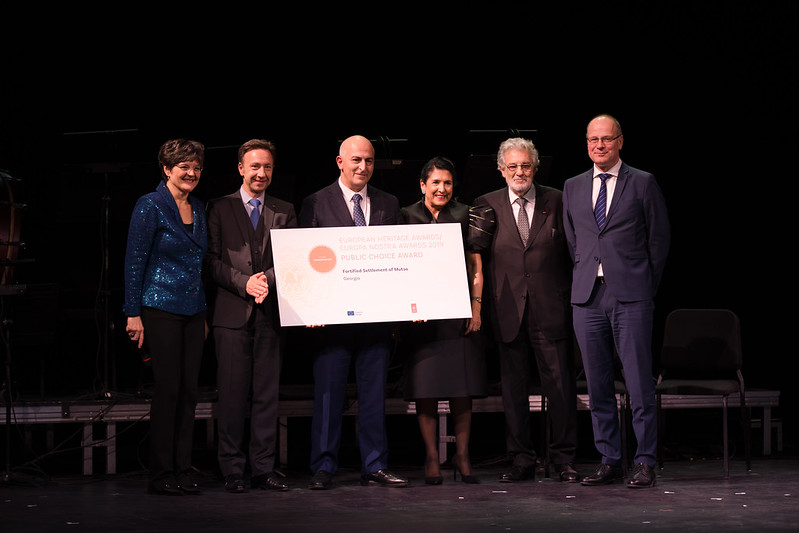 The Awards Ceremony was attended by more than 1,000 people, ranging from high-level officials from EU Institutions and Member States to leading representatives of heritage organisations from all over Europe. The announcement of the Grand Prix and the Public Choice Award was followed by a concert by the world-renowned Greek-Russian conductor Teodor Currentzis and his ensemble MusicAeterna and the soprano Sandrine Piau. 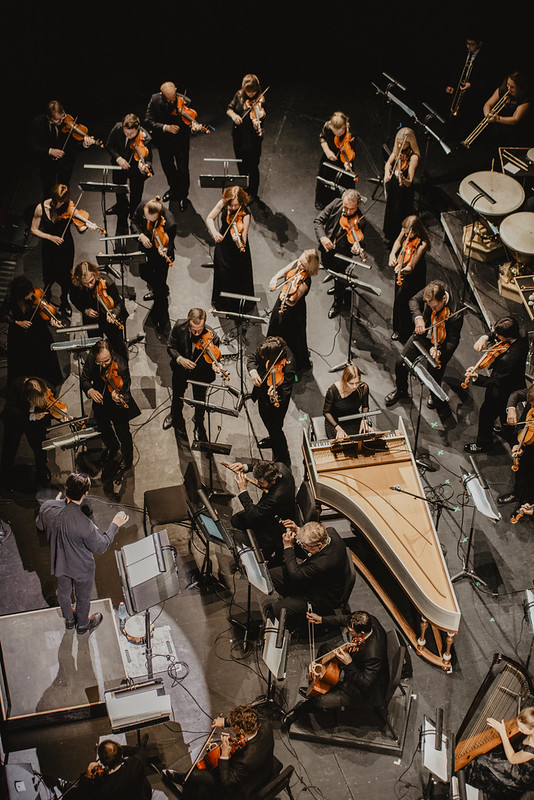 Background information on the Fortified Settlement of Mutso, Georgia

The village of Mutso is a remarkable fortified settlement which for centuries was the strongest outpost in northern Georgia, controlling the roads and protecting the state border. The village, strikingly integrated in the surrounding landscape thanks to the harmonious use of materials, was inhabited from the 10th century onwards. The harsh climate, the lack of arable land, the poor infrastructure together water shortages led to the depopulation of the village by the middle of the 20th-century. Through slow deterioration and lack of maintenance, this unique village was set to be lost. In 2014, a project to rehabilitate the settlement was initiated by the National Agency for Cultural Heritage Preservation of Georgia (NACHP) under the Ministry of Education, Science, Culture and Sports, with the support of the Georgian Government and in collaboration with other State institutions. The project was also supported through private funding, in particular the International Charity Foundation Cartu.