The high-level debate “HIGH-QUALITY BAUKULTUR!” was held on 22 September at the Giorgio Cini Foundation in Venice, in the frame of the European Cultural Heritage Summit 2021. This event was organised by the Swiss Federal Office of Culture (FOC) in collaboration with Europa Nostra, as a contribution to the promotion and dissemination of the Davos Baukultur Quality System published last May by the FOC in cooperation with international partners, including Europa Nostra. The high-level panel was composed of Alain Berset, Swiss Federal Councillor for Home Affairs, Anne Katrin Bohle, German State Secretary at the Federal Ministry of the Interior, Building and Community, Francisco de Paula Coelho, Dean of the European Investment Bank Institute, and Sir David Chipperfield, world-renowned architect, who opened the event with a keynote speech. The debate was moderated by Sneška Quaedvlieg-Mihailovic, Secretary General of Europa Nostra. 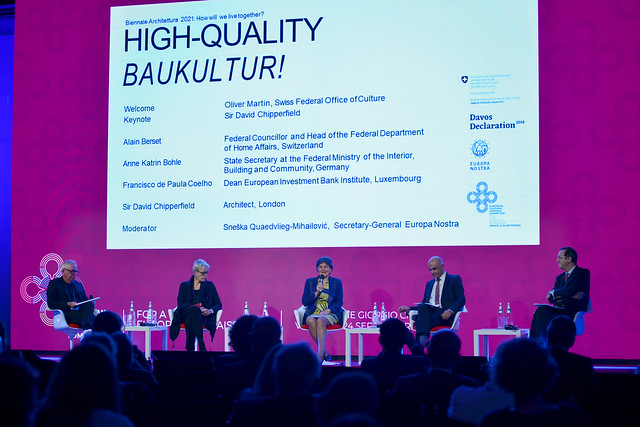 The debate addressed the latest developments and challenges linked to the quality of our built environment, as well as the opportunities provided by the Davos Declaration on high-quality Baukultur (published in 2018) and the successive Davos Baukultur Quality System (published in May 2021) to improve the quality of our living space for the public well-being, reminding that building is culture and creates space for culture. The debate highlighted the need for well-designed and lively cities and villages, equipped to meet changing social requirements while preserving their historical character.

In his keynote speech, Sir David Chipperfield, world-renowned architect and winner of a EU Prize for Contemporary Architecture – Mies van der Rohe Award as well as of two European Heritage Awards / Europa Nostra Awards, recalled that “quality” should not be a motto or a loose term, but a real criteria for development, reuse and repurposing of buildings. “What we build, where we build it and how we build it needs to be reconsidered, if we are to avoid a negative impact on our built and natural environments. The Davos Declaration 2018 on high-level Baukultur is one of the most effective ways to ensure this is the case,” he emphasised. 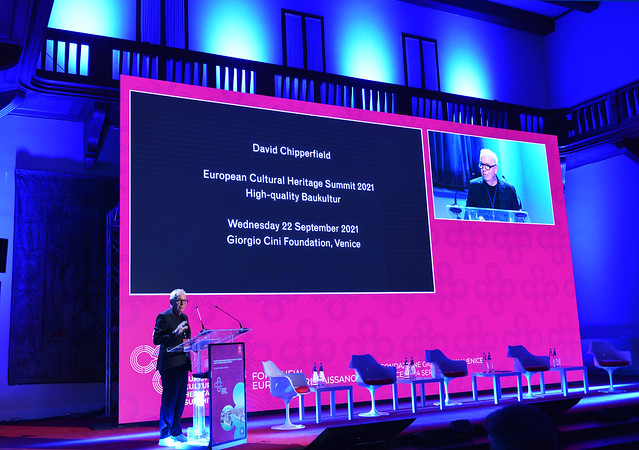 Europa Nostra’s Secretary General Sneška Quaedvlieg-Mihailovic then opened the high-level debate by recalling the historic Ministerial Meeting held on 22 January 2018, – during the European Year of Cultural Heritage – , which led to the adoption of the Davos Declaration on high-level Baukultur. “Europa Nostra was honoured to participate as an observer in this important meeting, was among the signatories of this pioneering Declaration and has fully endorsed it ever since,” she added.

Alain Berset, Swiss Federal Councillor for Home Affairs, explained the meaning of “quality” as understood within the Davos Process: “Quality in the built environment means striking the right balance between functionality, technique, the integration of cultural elements and the respect of the spirit of the place”, he stated.

Anne Katrin Bohle, German State Secretary at the Federal Ministry of the Interior, Building and Community, recalled the long path undergone by the “Baukultur” concept and movement – a word used in the German-speaking world for over 10 years – and applauded the latest positive developments. “For too long, Baukultur was only for experts. Fortunately, it has now reached policy, politics and those who are responsible for good governance and for the common good,” she said.

Francisco de Paula Coelho, Dean of the European Investment Bank Institute, explained: “The Davos Declaration is important for each and every of our operations, because the European Investment Bank is not a commercial bank – profit is not our purpose. Quality, as well as sustainability – both environmental and social – are at the heart of our mission”. He also addressed the need for more public-private partnerships for quality heritage interventions, both in terms of financial resources and transmission of know-how.

After the lively discussion, the moderator Sneška Quaedvlieg-Mihailovic, Secretary General of Europa Nostra, invited all speakers to summarise, in few words, the needed steps for a more sustainable coexistence of people, the built environment and nature. “Lasting investments”, “beauty”, “common good”, “creativity”, “governance”, “engagement” and “political will” were the key concepts that emerged from the inspiring closing session.