For the fourth year in a row, Europa Nostra co-organised the Destination of Sustainable Cultural Tourism Awards with the European Cultural Tourism Network (ECTN), the European Travel Commission (ETC) and the Network of European Regions for a Sustainable and Competitive Tourism (NECSTouR), which are all members of the European Heritage Alliance. The winners of the 2021 edition of the Awards were announced and celebrated during a ceremony held on 21 October in Athens, Greece, in the framework of the ECTN 14th International Conference for Cultural Tourism in Europe. 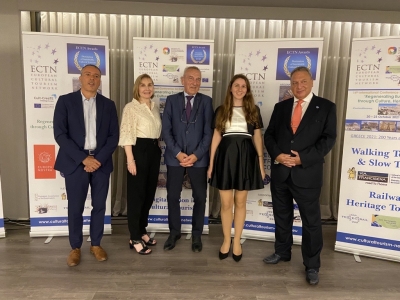 The Destination of Sustainable Cultural Tourism Awards enhance the visibility of European cultural tourism destinations, create a platform for sharing experience and knowledge, and promote networking between destinations. The 2021 edition focused on the theme of ‘Regenerating European Tourism through Culture, Heritage and Creativity’.

The winners and runners-up were selected by a Jury composed of representatives of ECTN, the European Travel Commission, Europa Nostra, NECSTouR and the Directorate General for Education and Culture of the European Commission, out of 36 applications received from 14 European countries. Among the Awards Jury, Europa Nostra was represented by Piet Jaspaert, Vice-President, and Jimmy Jammar, Head of the Brussels Office.

Winners of the Destination of Sustainable Cultural Tourism Awards 2021

1st prize:
Krapina Neanderthal Museum and and Site Hušnjakovo
by Museums of the Croatian Zagorje, Croatia

3rd prize:
Breakfast at Margina
by Association for the Promotion and Development of Tourism (APDT) in Timis County, Romania

2nd prize:
Digitalisation of Cultural Heritage throughout Slovenia
by Ministry of Economic Development and Technology, Slovenia

1st prize:
Development and Sustainability Strategy of the Way to Santiago in Barcelos
by Barcelos City Council, Portugal

2nd prize:
Cultural Tourist Route of the Wooden Churches in Romania and the Republic of Moldova
by Ministry of Economy, Business Environment and Tourism, Romania

3rd prize:
Naoussa Strategy as “The City of Wine” and Grape Harvesting Week Festival
by Municipality of Naoussa, Greece

SPECIAL JURY PRIZE – ADDRESSING THE IMPACT OF THE PANDEMIC

National level:
WanderlustGermany campaign to discover the nature highlights on walking and cycling tours
by German National Tourism Board, Germany

The 2021 edition of the Awards was supported by the Via Francigena Cultural Route of the Council of Europe, the European Association of Archaeologists (EAA), the Creative Tourism Network, FEDECRAIL and E-FAITH. The Awards contest was open to tourist destinations across Europe, to showcase their results and outputs in sustainable cultural tourism under seven categories. 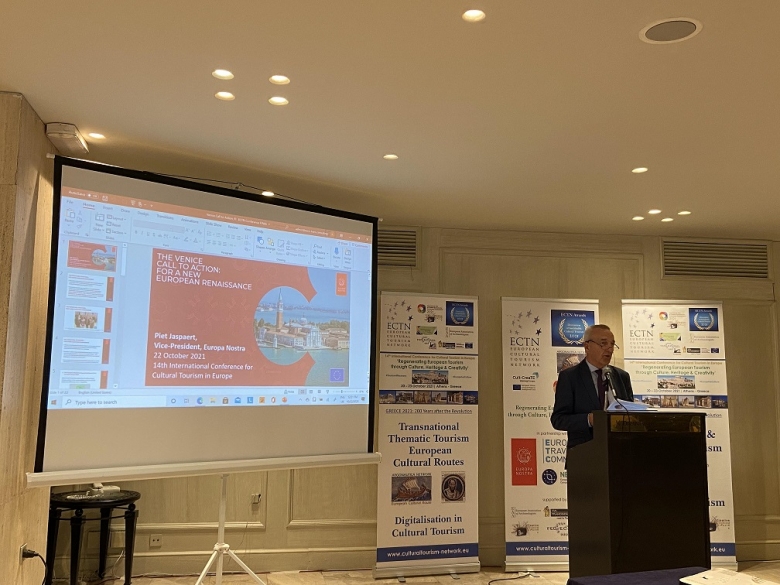 Piet Jaspaert, Vice-President of Europa Nostra, actively took part in the ECTN Conference and presented the Venice Call to Action: “For a New European Renaissance” recently released by Europa Nostra.

A video presentation of the European Cultural Heritage Green Paper “Putting Europe’s shared heritage at the heart of the European Green Deal” by its Lead Author Andrew Potts, Coordinator of the ICOMOS Climate Change and Heritage Working Group, was shown on the third day of the Conference.

The European Cultural Heritage Green Paper, released in March 2021, was produced by Europa Nostra in close cooperation with ICOMOS and the Climate Heritage Network, with the input of other members of the European Heritage Alliance. It was supported by the European Investment Bank Institute and the Creative Europe programme of the European Union.

Watch some highlights of the Awards Ceremony