Anne Teresa De Keersmaeker, a leading European personality in contemporary dance from Belgium, who is the founder of the dance company Rosas, received the Helena Vaz da Silva European Award for Raising Public Awareness on Cultural Heritage 2021 at a ceremony held on 8 November at the Gulbenkian Foundation in Lisbon. The United Nations Secretary-General, António Guterres, and the President of the Republic of Portugal, Marcelo Rebelo de Sousa, paid tribute to the winner, in special messages conveyed during the ceremony. On this occasion, Antonia Arslan, prolific Italian writer and academic of Armenian origin, was honoured with a Special Recognition of the Jury. Europa Nostra’s Secretary-General, Sneška Quaedvlieg-Mihailović, was the master of ceremony, which was held for a restricted group of attendees, but livestreamed on social media. 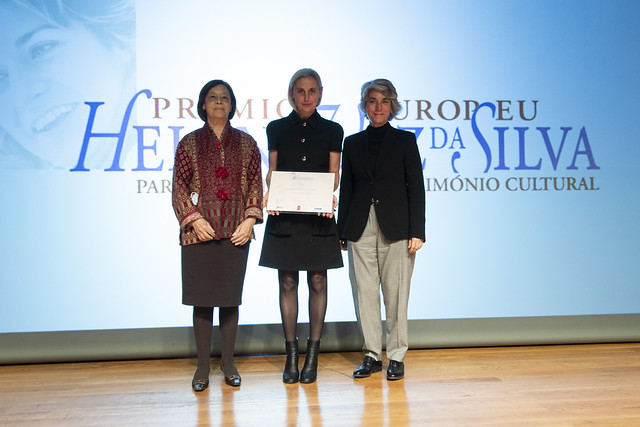 “The Helena Vaz da Silva European Award given to Anne Teresa De Keersmaeker demonstrates that contemporary dance can and should be considered an artistic achievement that belongs to our shared cultural heritage, both in Europe and in the world. (…) The Award also recognises that dance, while being an abstract and ephemeral form of art, is a concrete expression of values and ideas, forming a part of the great cultural achievements of humankind,” noted Mark Deputter, President of the Board of Culturgest, in his congratulatory speech for Anne Teresa De Keersmaeker.

Referring to the 26th UN Climate Change Conference of the Parties (COP26), which is taking place from 31 October to 12 November in Glasgow, Anne Teresa De Keersmaeker made a strong appeal to the world leaders: “We are facing huge challenges as humanity and we can only overcome them if we stand together. One of the major challenges is the extreme loss of animal and plant species, more than a million species are on the brink of extinction (and in the end we might be one of them). Connected to the problems of pollution, climate change and the abusive character of our economy on our planet, we are in a dangerous place. We destroy our environment, we destroy ourselves. It has never been more important for world leaders to come together as a team, acknowledge the full weight of this crisis, and put wise plans in action to do something about it.”

The Secretary-General of Europa Nostra, Sneška Quaedvlieg-Mihailović, sincerely congratulated Anne Teresa De Keersmaeker on this well-deserved European Award. “Thank you so much for your impressive acceptance – or shall I rather say choreographic – speech. You have placed your work at the heart of what are the challenges of today’s world. While I was listening to you, I was wondering: If only the world leaders who are meeting in Glasgow could be here to hear your “call for a reset of our society” and for “imagining collective solutions to collective problems”. It was the most beautiful demonstration that the world needs more artists and less economists. May you keep using the power of dance and music to promote our shared cultural heritage and values with the aim to shape a more beautiful, a more sustainable and a more inclusive Europe!”

LIVE #HelenaVazDaSilvaAward – Message from @UN SG @antonioguterres: #AnneTeresaDeKeersmaeker’s work is a clear demonstration of how the Arts bring people & different cultures closer together, and how talent & sensitivity contribute to an authentic culture of peace & solidarity. pic.twitter.com/QQrJzwxh0h

The Minister of Culture Graça Fonseca concluded her address with a powerful message: “Cultural heritage – what distinguishes us as Europe, as countries, as peoples – is the unifying element that can make a difference in our future, as we face increasingly unstable and unpredictable times. Europa Nostra can count on the Portuguese Government to continue this uncompromising fight to place culture and cultural heritage at the centre of the economic and social model that we strive for, and, above all, of the democracy that we want.”

The United Nations Secretary-General, António Guterres, in a congratulatory message, wrote: “The outstanding work of Anne Teresa De Keersmaeker is a clear demonstration of how the arts bring people and different cultures closer together, and how creativity, talent and sensitivity contribute to an authentic culture of peace and solidarity.”

The Secretary-General of Europa Nostra, Sneška Quaedvlieg-Mihailović, also seized the opportunity to “thank the United Nations Secretary-General for his strong commitment to promoting our shared culture and heritage, as part of his wider engagement for saving our humankind and our planet”. As stated in our recently published Venice Call to Action: “For a New European Renaissance”, and as demonstrated by our contribution to a series of events held in the framework of the COP26, Europa Nostra is fully committed to highlighting the relevance of cultural heritage-based climate action, building on the analysis and recommendations formulated in our European Cultural Heritage Green Paper: “Putting Europe’s shared heritage at the heart of the European Green Deal”.

The President of the Republic of Portugal, Marcelo Rebelo de Sousa, underlined the close relationship of this year’s winner with Portugal in a congratulatory video message: “This year, the Award recognises someone who is for us an example and a source of pride. I wish to thank Anne Teresa De Keersmaeker for her long and fruitful connection with our country”.

Celebratory evening in honour of #AnneTeresaDeKeersmaeker at @FCGulbenkian in Lisbon with Members of the Jury of the #HelenaVazDaSilvaAward, relatives of Helena Vaz da Silva, representatives from @CNCultura, Europa Nostra & Europa Nostra Belgium and the Portuguese Press Club pic.twitter.com/Ok0iKudg0p

Antonia Arslan was also honoured during the ceremony with a Special Recognition of the Jury. Guilherme d’Oliveira Martins, a Trustee of the Gulbenkian Foundation and Member of the Jury of the Award, made a congratulatory speech for Antonia Arslan, who could not be present due to health issues. “Antonia Arslan has been a champion of Europe’s cultural heritage – tangible and intangible – for nearly 60 years: promoting European literature, defending Italian female writers, and also defending the culture and the memory of the Armenian people,” he emphasised. 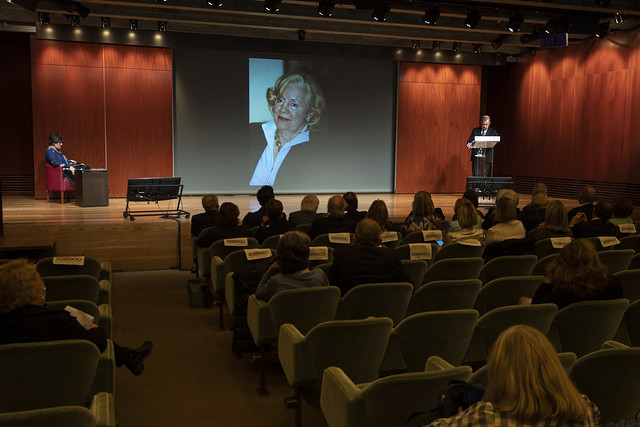 In her short acceptance message, Antonia Arslan wrote: “Each of us must strive to preserve our precious cultural heritage for our children and our children’s children. Thank you for organising this Award and for reminding us all to celebrate Europa Nostra, our Europe!”

The European Award for Raising Public Awareness on Cultural Heritage is named after Helena Vaz da Silva (1939-2002), Portuguese journalist, writer, cultural activist and politician, in memory and recognition of her remarkable contribution to the promotion of cultural heritage and European ideals.