From 17 to 20 June, a group of 60 Young Heritage Professionals from 23 countries across Europe and beyond gathered in Athens, Greece, for the Capacity Building Days in conjunction with the Council and Board meetings of Europa Nostra. As a follow-up of the successful “The Future is Heritage” Summit held in Berlin in June 2018, these uplifting “Capacity Building Days” were co-organised by Europa Nostra and its country representation in Greece Elliniki Etairia, Erfgoed Brabant and Erfgoed Gelderland with the support of the EU Creative Europe programme, the provinces Gelderland, Noord-Brabant and Overijssel, as well as the Dutch Fonds voor Cultuurparticipatie. For three days, students, heritage professionals and volunteers of varied ages and backgrounds engaged in an interactive programme highlighting the value of multidisciplinary and intergenerational exchanges for Europe’s heritage movement. The programme’s highlight was an excursion to the historic site of Marathon together with Europa Nostra Council and Board members, where participants celebrated the winner of a European Heritage Awards / Europa Nostra Awards 2019, the ‘Greek Paths of Culture’ (read news item).

The Capacity Building Days started on 17 June with an introductory session hosted by Elliniki Etairia – Society for the Environment and Cultural Heritage – at their premises in the Plaka neighbourhood right in the heart of Athens, where the organising partners presented the programme and the five theme tracks. In her welcome address, the Secretary General of Europa Nostra, Sneška Quaedvlieg-Mihailović, expressed how essential the involvement of the young generation is in the heritage sector: “Young people are not the future, they are the present,” she said, recalling a powerful statement made at the European Cultural Heritage Summit in Berlin. She also stressed that the aim of the Capacity Building Days in Athens was to boost the capacity for intergenerational interaction both of young heritage professionals and of members of the Europa Nostra Board and Council.
All participants were then kindly invited for a special encounter at the historic house located under the Acropolis where they were welcomed by Costa Carras, Vice-President of Europa Nostra and founder of Elliniki Etairia and his wife Lydia Carras, who is the President of Elliniki Etairia.

The parallel working sessions kicked-off the next day at the University History Museum. The group working on the theme of “Contested Heritage” went to visit Tatoi, the former private estate of the Greek Royal Family, an endangered site which has been shortlisted for the 7 Most Endangered programme in 2013. The visit was guided by expert Costas Stamatopoulos, Vice-President of Elliniki Etairia, who provided participants with background information on the campaign to save and rehabilitate this heritage gem. Stefan Balici, manager of the National Institute of Heritage in Romania and Europa Nostra Council member, presented similar cases of contested heritage from his own country. At the end of the visit, the young professionals worked in small groups on a development plan to revive the site of Tatoi and make it more accessible to the public. 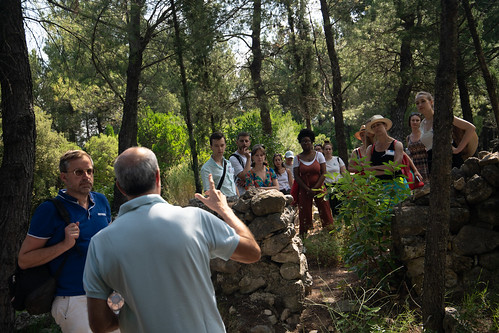 At the core of the theme on “Heritage & Activism” was the issue of taking different interests into account when it comes to heritage management. The workshop was moderated by Pavlos Chatzigrigoriou, post-doc researcher at the University of the Aegean and Europa Nostra Council member, together with Wouter Hinrichs, Dutch archeologist and project team member of the Capacity Building Days 2019. During an excursion to the Academy of Plato, led by Nicholas Karachalis, lecturer at the Department of Planning and Regional Development at the University of Thessaly, participants had the chance to discover this emblematic historical and archaeological site, whose neglect has given rise to several local protests. In this context, the young professionals discussed urban development in an historic environment and local cultural heritage movements in Athens.

The following day, Katerina Stebili, Programme Manager at Elliniki Etairia, presented the “SOS Programme”, which aims at providing support to civil society organisations and citizens in Greece when their cultural or natural heritage is endangered. She highlighted the most recent successful campaign against Makrygianni: the construction of a nine-story tall building obscuring the Acropolis and the Parthenon. 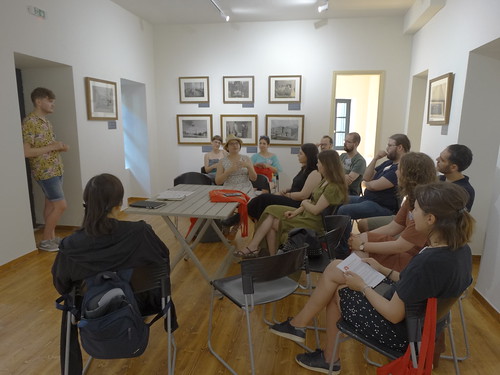 The working group on “Heritage & Social Cohesion” discussed case studies of tangible and intangible cultural heritage from all over Europe and how it can foster a sense of belonging thanks to its unique ability to unite people. Participants also discussed how heritage can be instrumentalised to divide people. In his role as moderator, Piet Jaspaert, Vice-President of Europa Nostra, presented relevant examples from among the winners of the European Heritage Awards / Europa Nostra Awards. He underlined that ‘’Cultural heritage is not only about the past, it is an incredible resource for the future. It is a strategic investment, since each single euro that is invested in cultural heritage generates more than twelve times return’’.

The case of heritage, reconciliation and cohesion in Cyprus was discussed with Androulla Vassiliou former European Commissioner for Education, Culture, Youth and Sport and Vice-President of Europa Nostra, together with Antigoni Michael, young heritage professional at UNDP Cyprus. Androulla Vassiliou explained how cultural heritage became a tool for the Technical Committee on Cultural Heritage for developing understanding, solidarity and trust in Cyprus’ frozen conflict environment between people with different ethnic backgrounds, religions and languages. She stated: ‘’Cultural heritage of course deals with monuments and archaeological sites, but we must not forget that it is also an integral part of our daily lives. It is what brings people together. What we create in the present and the involvement of young people is crucial. Youth is the present generation that will pass on our shared cultural heritage to the next generation‘’. Also talking about her own experience in Cyprus, Antigoni Michael engaged in an interesting discussion on how young people can actively contribute to heritage preservation of cultural heritage and collaboration in a divided environment.

My dialogue with youth is always stimulating!especially on an interesting subject such as today’s, on ‘cultural heritage as a vehicle to cooperation & social cohesion’, in the context of @europanostra capacity building project of youth in Athens. pic.twitter.com/8SipSoiVQs

Other heritage projects amplifying social cohesion and inclusion through awareness raising and from a policy perspective were presented by Marc Wingens, Director of Erfgoed Gelderland, as well as Anna-Maija Halme, Communications Officer at the Finnish Local Heritage Federation and Europa Nostra Council member.

The project “ENtopia – Our Places in Europe” was at the core of the working group on “Rural Heritage-led Development”, which focused on the use of cultural and natural heritage to develop rural areas in different ways (from inducing national or international tourism to stimulating the local economy). Miltiades Lazoglou, Programme Manager at Elliniki Etairia, together with Laurie Neale, architect, heritage consultant, and Europa Nostra Council member, evaluated in which ways ENtopia, as a network for small towns, villages, localities and landscape areas, aims at fostering greater appreciation, awareness and sharing between communities and places in rural areas across Europe. 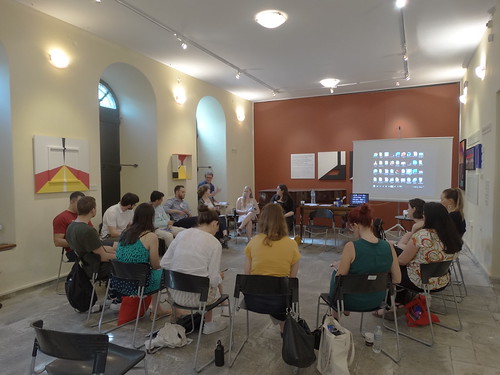 The case of the village of Durbuy, tourist destination in the province of Luxembourg in the South of Belgium was presented by Sarah-Maria Geradin, Tourism bachelor student at NHTV Internationale Hogeschool Breda. Due to a downfall in tourism and economic activity, plans to develop the rural village into a theme-park raises questions about the sustainability of such a project. Finally, Darinka Thijs, historian, freelancer and project employee at Erfgoed Gelderland, introduced the case of pop culture tourism based on places featured in movies, TV series or books. Although this new kind of tourism is an economic opportunity, some places encounter issues of mass-tourism, lack of infrastructure, or increasing cost of living for residents.

DAY 3 of #CBD, the participants and experts are ready to start! The rural heritage group is going on a walk through Athens to find the spots and buildings that are in the game ‘Assassin’s Creed: Odyssey’. Perfect example of pop-culture tourism #thefutureisheritage https://t.co/wucrNBrzuN

Moderated by Joop de Jong, Associate Professor of arts & heritage at the University of Maastricht and Europa Nostra Council member, together with Daphne Bouman and Lieke Droomers, CBDs project team members, the workshop on “Urban Heritage-led Development” aimed at studying the social, economic and environmental implications of heritage-led urban development and considered some of the ethical dilemmas that accompany them. In this context, participants also joined the visit to the Academy of Plato led by Nicholas Karachalis. The workshop was completed by an excursion to the Hadrian Aqueduct, a 20km-long subterranean Roman channel which is still carrying water underneath the city and hence unique in Europe. Participants learned how the UrbanDig project connects this heritage water line to local communities, thanks to Giorgios Sarachinis, Director of the UrbanDig project and Head of Assessment and Support of New Activities at the Athens Water Supply and Sewerage Company, as well as Azio Blasetti, architect and lecturer at PennDesign. 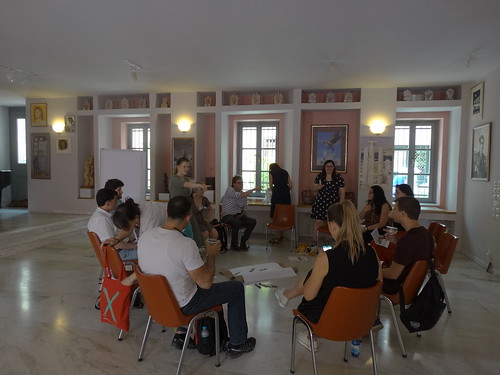 After these two days of parallel working groups, discussions and discoveries, all participants came together for the closing session hosted by the Ionic Centre in the Plaka neighbourhood, just a stone’s throw from the Acropolis. Europa Nostra Board member Astrid Weij and Council member Karel Loeff moderated this interactive session during which the Young Heritage Professionals presented the outcomes of their working groups. Asked by the moderators why she joined the Capacity Building Days, a young archaeologist from France summed it up by saying “to meet other young people working on heritage issues and to get to know Europa Nostra”. For each theme track, participants explained the challenges related to their case studies and excursions, as well as the possible solutions they had discussed in groups, using interactive tools and seeking for experts’ reactions in the audience. It was indeed a unique occasion also for Europa Nostra’s participating Board and Council members to exchange views with a young generation of heritage professionals.

In his reaction, Europa Nostra’s Executive President Hermann Parzinger expressed how genuinely impressed he was by the wealth of topics covered and the rich programme with its ample opportunities for young professionals to engage in discussions with their peers. At the end, he stressed that he and the Europa Nostra Board and Secretary General are committed to involving young people much more intensely and directly in the future work of Europa Nostra.

Such a joyful atmosphere was the perfect occasion for Europa Nostra’s Secretary General Sneška Quaedvlieg-Mihailović to invite the participants to let their creativity run free and to contribute to Europa Nostra’s #Ode2Joy Challenge 2019 by reinterpreting the European Anthem. By way of inspiration, she presented the video compilation featuring a selection of the 60 contributions received this year from 20 countries across Europe and beyond.

What better way to close the Capacity Building Days 2019 than a visit on 20 June to the symbolic monument of the Acropolis? Fani Mallouchou-Tufano, Europa Nostra Council member and leader of the Committee overseeing the conservation of the Acropolis monuments guided participants through this historical gem. Standing for more than 5,000 years, it does not only remind us all that democracy is the government system and foundation of our Europe, but even more so that culture and heritage bring us together. This emblematic monument above all was created from humans for humans, and until this day remains one of the major European reference and meeting points!