Home News Together with the global heritage community, Europa Nostra contributes to COP26 in Glasgow

Together with the global heritage community, Europa Nostra contributes to COP26 in Glasgow

The 26th UN Climate Change Conference of the Parties (COP26) is taking place in Glasgow from 31 October to 12 November 2021. The COP26 will bring parties together to accelerate action towards achieving the vital goals of the Paris Agreement and the UN Framework Convention on Climate Change. Many of the events can be followed online via the COP26 YouTube channel.

As stated in our recently published Venice Call to Action: “For a New European Renaissance”, Europa Nostra is fully committed to highlighting the relevance of cultural heritage-based climate action during and after the COP26, building on the analysis and recommendations formulated in our European Cultural Heritage Green Paper: “Putting Europe’s shared heritage at the heart of the European Green Deal”.

Europa Nostra will contribute to 4 heritage-related events organised in the framework of the COP26:

1 November, 12:45-15:45 (CET, Brussels Time)
General Assembly of the Climate Heritage Network (hybrid format)
As a proud founding member of the Climate Heritage Network (CHN), Europa Nostra, represented by its Secretary General Sneška Quaedvlieg-Mihailovic, will participate online at the CHN 2021 General Assembly. This event will feature an overview of work by the CHN and its members over the past year to mobilise arts, culture and heritage for climate action. It will lay the foundation for ground-breaking work in 2022 to foreground the cultural dimensions of the climate emergency and scale up culture-based climate solutions. The outcomes of CHN’s Regional Co-Chair Elections will also be announced during the event. Europa Nostra is the sole candidate to become the new Regional Co-Chair of the Climate Heritage Network for Europe and the Commonwealth of Independent States. If elected, Europa Nostra will use its wide network, expertise and advocacy skills to help further strengthen and enlarge the outreach and impact of the Climate Heritage Network in Europe and globally.
Virtual attendance is open to CHN members and non-members alike.
Register here to follow this event online. 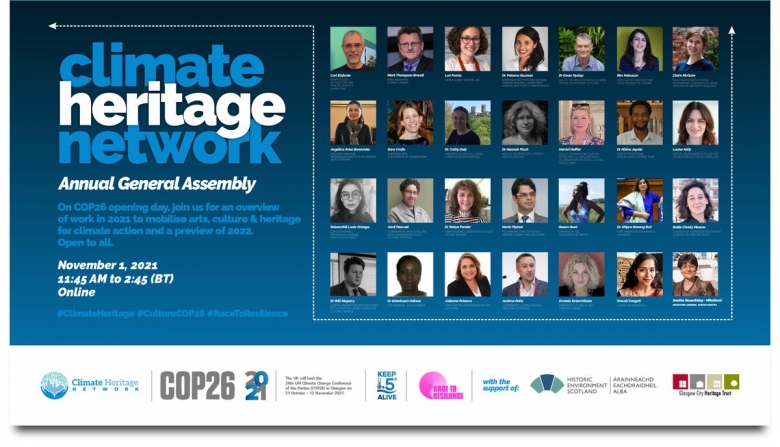 Over 15 heritage-related events are being organised by members of the Climate Heritage Network, of which Europa Nostra is a founding member, including an event organised on 5 November (11:00 – 12:15 CET Brussels Time), as part of the Youth Day at COP26, entitled “Culture Driving Climate Resilient Futures: An Intergenerational Dialogue”, with active participation of Pravali Vangeti, member of the European Heritage Youth Ambassadors joint programme of Europa Nostra and ESACH.  Register here to follow this event online.

We invite all individuals and organisations to read and sign the Manifesto for the COP26 “Accelerating Climate Action through the Power of Arts, Culture and Heritage” issued by the Climate Heritage Network.  This important manifesto presents a set of high level messages on the role culture can play in keeping the goal of 1.5° Alive and pursuing a resilient world.

We also invite you to visit the Culture at COP website which showcases all COP26-related art, culture and heritage events (in-person and virtual) for diverse audiences. It will also provide links to the COP26 themes and key COP26 Policy Issues as identified by the Climate Heritage Network. 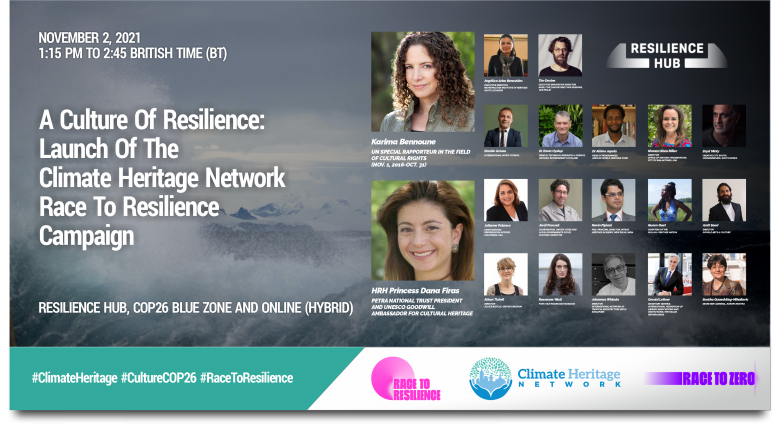 2 November, 17:00-20:30 (CET, Brussels Time)
Addressing climate change impacts on cultural and natural heritage – The Way Forward
(hybrid format: live from Brussels and streamed in the EU Pavilion of the COP26)
This high-level event, hosted by the Greek Government UN Initiative, aims at promoting the exchange of best practices to improve the resilience of world’s monuments and cultural/natural sites to the impacts of climate change. It will gather high-level representatives of the Greek government (including Prime Minister Kyriakos Mitsotakis), UNESCO (including Director-General Audrey Azoulay), the European Commission (Executive Vice-President Frans Timmermans and Vice-President Margaritis Schinas), the United Nations (Secretary of State John Kerry) and the World Meteorological Organisation, as well as Ministers from Tuvalu, Israel, Portugal, Poland, Egypt, Jordan, North Macedonia and the United Arab Emirates. The civil society will be represented by Europa Nostra, with the participation of our Secretary General, ICOMOS and the World Human Forum.
Register here to follow this event online.

11 November, 17:00-18:00 (CET, Brussels Time)
Powering climate action through heritage policies, organisations, research and public programmes
(hybrid format, from the EU Pavilion of the COP26)
This event will build on a range of European and international projects, policy initiatives and frameworks which aim to inspire radical change for climate action in and with the cultural sector. It is jointly organised by Europa Nostra, the Joint Programming Initiative on Cultural Heritage and Global Change (JPI CH), the Climate Heritage Network and Reimagining Museums for Climate Action, with the support of the Italian Ministry of Culture and the European Commission’s Directorate General for Education and Culture. During the event, our Secretary General will present our European Cultural Heritage Green Paper.
Register here to follow this event online.

More than ever, Europa Nostra is convinced that tackling climate change is this generation’s defining task and Europe’s cultural heritage community can and should play an important role in addressing it. We count on the most valuable support of our members and partners to continue raising awareness on the key role of cultural heritage for transformative climate action and to achieve the ambitious goals of the European Green Deal, as a contribution to the global mobilisation for urgent and robust responses to the climate emergency, for the benefit of humankind and for the benefit of our planet.

During the COP26, the EU will host more than 150 side events at the EU Pavilion in Glasgow, Brussels and online. These events, organised by a variety of countries and organisations from Europe and around the world, will address a broad range of climate-related issues.

The Programme of the EU Pavillion at the COP26 includes two additional events that are of particular interest for the wider heritage community:

10 November, 14:00-15:00 (CET, Brussels time)
“How to listen, How to talk, How to act – bringing citizens’ voices to COP, organised by the European Commission – DG CLIMA and Climate Pact Ambassadors.

Livestream of the Concert for the Future of Venice – Floating Autumn

Moreover, the recording of the exceptional Concert for the Future of Venice – Floating Autumn, performed by the European Union Youth Orchestra (EUYO) and organised Europa Nostra in the frame of the European Cultural Heritage Summit 2021, will be livestreamed on 3 occasions, namely on 1 November at 20.30 (CET, Brussels Time) via the EUYO YouTube channel, on 4 November as part of the Resilience Hub, a physical and virtual Hub at COP26, and on 5 November, at the start of the Youth and Public Empowerment Day at COP26, as part of the The [Uncertain] Four Seasons livestream, a 24-hour global streaming event.

The concert, recorded on 23 September at Palladio’s Basilica del Redentore in Venice, featured the world première of Floating Autumn, a re-composition by Italian composer Carmen Fizzarotti of Autumn from Vivaldi’s The Four Seasons. Using an algorithmic re-composition of Vivaldi’s The Four Seasons informed by current climate change predictions for 2050, the concert portrays in music the catastrophic climate effects that cities like Venice can expect.

The [Uncertain] Four Seasons is a global project designed to persuade political leaders to sign the Leaders Pledge for Nature, a pledge committing to reversing biodiversity loss by 2030. During our Summit in Venice, both Europa Nostra and our esteemed partner the European Union Youth Orchestra, endorsed this Pledge.