Productive and fruitful meetings of Europa Nostra’s Board, Council, Scientific Council and General Assembly were held during the European Heritage Congress in Vienna on 2-4 May. 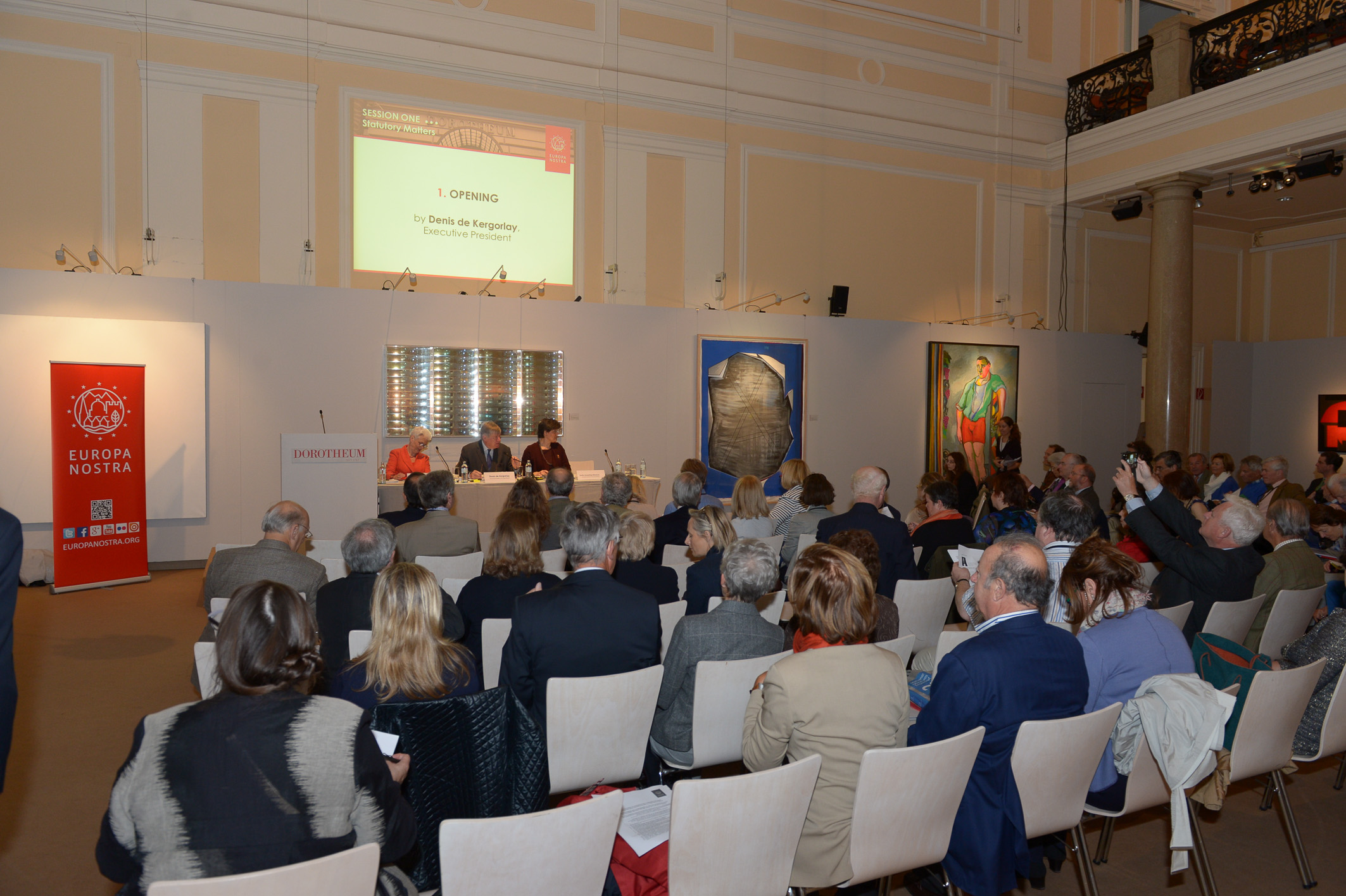 The General Assembly of Europa Nostra took place on 4 May at the Franz Joseph Hall of the Dorotheum Palace. Photo: Oreste Schaller.

On 2 May, the Board convened at the hotel Bristol. The meeting included a discussion on the final preparation of the Vienna Congress with Alexander Kottulinsky and Alexander Fürst zu Sayn-Wittgenstein-Sayn, as well as a fruitful session with of the Audit Committee of Europa Nostra, which allowed the members of the two bodies to exchange their views on the finances of the organisation and the cooperation between the various financial bodies.

On the same day, the Scientific Council met at the Dorotheum Palace. In the morning session, the Scientific Council appointed two new members, Rory Sherlock from Ireland and Sara Van Rompaey from Belgium; discussed the inclusion of Digitization in the Research category of the Awards Scheme and made suggestions on how to assess the entries; and nominated the representatives who will participate in the rescue missions to ‘The 7 Most Endangered’ monuments and sites in Europe in 2014. In the afternoon session, seven ENSC members gave interesting lectures on various subjects.

On 3 May, the Council assembled at the lecture room of the Kunsthistorisches Museum where they were welcomed by Franz Kirchweger, curator of the Kunstkammer.

Three representatives of the Parliamentary Assembly of the Council of Europe joined the meeting to discuss the follow-up of the PACE final report “Europe’s Endangered Heritage”. The discussion was introduced by Nicos Nicolaides, PACE member from Cyprus and Chair of the Sub-Committee on Culture, Diversity and Heritage. The report was presented by the rapporteur, Vesna Marjanovic, PACE member from Serbia.

An interesting exchange of views took also place between the Council members and Michel Magnier, Director ‘Culture and Creativity’ of the DG Education and Culture of the European Commission, concerning the current EU Strategy for cultural heritage, including the future EC Communication on cultural heritage, which should be released before the end of the mandate of Commissioner Vassiliou.

The General Assembly of Europa Nostra took place on 4 May at the Franz Joseph Hall of the Dorotheum Palace and was divided in two sessions.

The morning session was dedicated to statutory matters: the approval of the Annual Report for 2013, the approval of the preliminary Budget for 2015 and the various new (re)appointments to the Council. The General Assembly also decided to appoint the outgoing Board member, Tom Henkemans, as Honorary Life Member of Europa Nostra, in recognition of his long and dedicated service to Europa Nostra.

In the afternoon, Denis de Kergorlay, Executive President of Europa Nostra, and Guy Clausse, Acting Dean of the European Investment Bank Institute, unveiled ‘The 7 Most Endangered’ monuments and sites in Europe for 2014. Nicos Nicolaides, Chair of the Sub-Committee on Culture, Diversity and Heritage of the Parliamentary Assembly of the Council of Europe, reacted to this important announcement.

The panel discussion on the ‘New Narrative for Europe and cultural heritage’ with representatives from the worlds of culture, politics and business closed this year’s General Assembly.