2022 is the European Year of Youth (EYY), shining a light on the importance of European youth to build a better future – more sustainable, inclusive, beautiful and peaceful. Europa Nostra is part of the European Commission’s Stakeholders Group set-up for the EYY.

In order to effectively contribute to the European Year of Youth, Europa Nostra has mainstreamed youth in all its strands of works, scaled-up existing youth-related initiatives and created new partnerships. 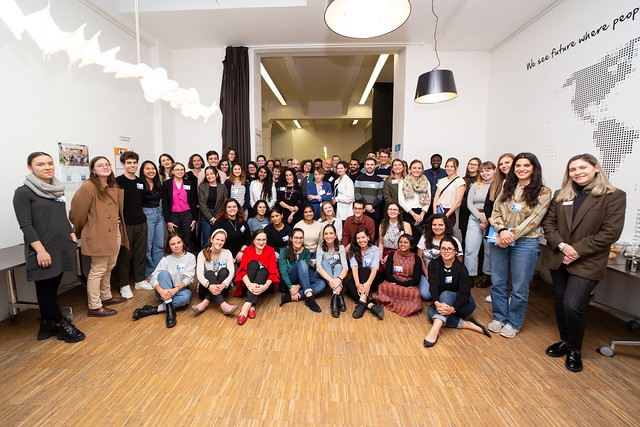 Europa Nostra has actively contributed to the European Year of Youth through several activities and events, which focus on fostering capacity-building and enhancing intergenerational cooperation and mobility among young people, such as:

🎼🎶Music speaks louder than words. Many thanks to the six young Ukrainian musicians for their beautiful & moving performance at our “Solidarity Concert with the people and culture of Ukraine”, organised in the frame of the #NewEuropeanBauhaus Festival. #WeStandWithUkraine 🇺🇦🇪🇺 pic.twitter.com/yHLJpDgtPu

🏛️👫 #EuropeanHeritageSummit – Without young professionals no future for heritage!🔑outcomes of the #TheFutureisHeritage Summit 2022:
✅ Importance of interdisciplinarity
✅ Inter-generational collaboration on equal footing
✅ Include young voices in decision making#EYY2022 pic.twitter.com/fpA4neAQbv

2023
Launch of the European Heritage Youth Residency programme, which will involve our country representations and engage our network of young members

Mobilisation of our youth network

The Young Members of Europa Nostra and the European Heritage Youth Ambassadors have made their voices heard during our events and have been empowered to organise their own events.

Young people have been encouraged to respond to Europa Nostra’s call to organise citizens’ debates on the future of Europe in heritage sites, involving their own communities and local, regional, national or European decision-makers. We are looking for their concrete ideas on how to rebuild Europe after the COVID-19 pandemic and incite a New European Renaissance. The conclusions of the debates will be uploaded on the platform of the European Year of Youth.

Europa Nostra is also mobilising its Europe-wide membership of organisations and individuals to contribute to and communicate about the EYY, in particular the Universities that are already members of our network.

In order to ensure the lasting legacy of the European Year of Youth, a policy/position paper, building on the various campaigns and events and encapsulating our vision for youth and cultural heritage, will be prepared and issued by the end of the year.

As a contribution to the European Year of Youth, Europa Nostra, in partnership with other heritage youth organisations, including FisH, launches a consultation on Youth for the Future of Cultural Heritage in Europe!
Help us empower & raise the voice of Europe’s young generation! pic.twitter.com/CBdfF0K84M

In this respect, Europa Nostra and its partner organisations working with youth in cultural heritage launched the consultation “Youth for the Future of Cultural Heritage in Europe”. The Europe-wide consultation, done through a 10-minute anonymous online survey and lasting until 31 August, shall identify young people’s most pressing needs, dreams and aspirations when it comes to the future of the cultural heritage sector. The results will be analysed and will feed the policy/position paper to trigger concrete actions for youth involvement in the cultural heritage sector.

Subsequently, a joint advocacy campaign will be deployed and relayed via the platform of the European Year of Youth.

The European Year of Youth is a unique opportunity for Europa Nostra to create and strengthen partnerships with a number of civil society organisations inside and outside of the traditional heritage field, as well as with relevant services within the EU Institutions.

Become a member & discover our programmes