Oksana Lyniv, renowned conductor from Ukraine, who is the General Music Director at Teatro Comunale di Bologna, and who is also the founder and art director of the Youth Symphony Orchestra of Ukraine and the LivMozArt International Classical Music Festival, has won the Helena Vaz da Silva European Award for Raising Public Awareness of Cultural Heritage 2022. This high European recognition pays tribute to Oksana Lyniv’s exceptional art of communicating European culture and values through music to a wider public, in particular the younger generations.

The Helena Vaz da Silva European Award, which this year celebrates its 10th edition, was established by the Centro Nacional de Cultura in cooperation with Europa Nostra and the Clube Português de Imprensa and with the support of the Ministry of Culture of Portugal, the Gulbenkian Foundation and Tourism of Portugal.

On the occasion of the 10th anniversary of the Award, the Jury also granted a Special Recognition to Dijana Milošević, theatre director, writer, professor and artist from Serbia, who is the founder and director of the DAH Theatre – Research Centre for Culture and Social Changes in Belgrade, in recognition of her key role in defending Europe’s culture and values.

The Award Ceremony will take place on 24 November at the Gulbenkian Foundation in Lisbon.

Reacting to the news, Oksana Lyniv stated: “During the terrible war in the heart of Europe, when hatred grows and a huge number of innocent victims die, culture became perhaps the most important means for healing pain and despair, to create living testimonies of this tragic time for future generations, and to find strength to restore mental power, to unite together and reconstruct what was destroyed. It is a great honour for me to receive the Helena Vaz da Silva European Award 2022. I want to dedicate it to all those who continue to fight for cultural and humanitarian values during the war. This Award will give me the strength to continue my important mission – to develop cultural ties between Ukraine, Europe and the world, thus enriching our common cultural heritage”.

The Jury of the Helena Vaz da Silva European Award emphasised: “We wish to pay tribute to the extraordinary combination of artistic excellence, precision and temperament of Oksana Lyniv’s conducting; the fascinating depth and width of her musical knowledge and understanding, as well as her profound approach to art, her meticulous study of works of Europe’s cultural heritage and her leading role in raising public awareness of Europe’s cultural values and diversity. Moreover, Oksana Lyniv is passionately committed to supporting young musicians and to promoting classical music in Ukraine and across Europe. In these dark times of war on our continent, we wish to emphasise the cohesive and healing power of music and heritage to promote peace and to build lasting bridges between the citizens and communities from Ukraine, Europe and the rest of the world.” 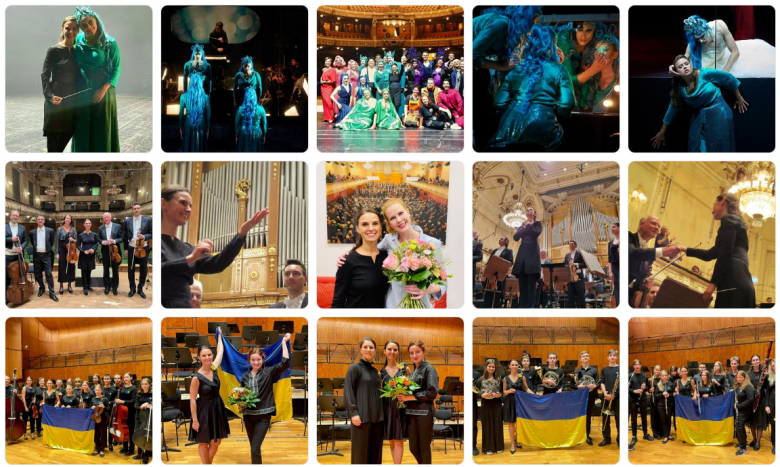 Oksana Lyniv’s international career started in 2004 when she won the Third Prize at the Gustav Mahler International Conducting Competition in Germany. From 2008 to 2013, she worked at the Odessa National Opera and, from 2013 to 2017, she was musical assistant to the General Music Director Kirill Petrenko and conductor at the Bavarian State Opera in Munich.

Oksana Lyniv is the founder and artistic director of LvivMozArt Festival based in Lviv as well as founder, chief-conductor and art director of the Youth symphony Orchestra of Ukraine (YsOU).

She has been pioneering as the first female chief conductor of an Italian opera orchestra, being, since 2022, the General Music Director of the Teatro Comunale di Bologna as well as the first female conductor in the history of the Bayreuth Opera Festival, with her debut production of “Flying Dutchman” as the opening of the Festival in 2021. In November 2020, Oksana Lyniv received the Opera! Awards as the best female conductor of 2020. Between 2017 and 2020 she was principal conductor of the Graz Opera and the Graz Philharmonic Orchestra (Austria).

Oksana Lyniv is passionately committed to promoting classical music in Ukraine, thus playing an important role as one of the most important figures in the cultural landscape and is acknowledged as the cultural ambassador of Ukraine to the world. For this, she was awarded several titles, such as the Honorary Ambassador of the City of Lviv, as well as with numerous Ukrainian awards: the medal “For Intellectual Courage” from the magazine “Ji”, “People of Lviv” (2017), “People of modern times” (2017), “BOOM Awards 2018”. For her international projects she was rated “100 Most Influential Women of Ukraine” by the magazine “Focus” and “Top 100” by the magazine “NV” (2019). She is also a laureate of the renowned TREBBIA International Award in the nomination “For Art Activity” (Czech Republic, 2019), received the status “Star of the Year 2015” in the nomination “Classics” and a prize from the Munich Opera Festival, two years in a row she was nominated in the category “Art” by the magazine Die Steierin (2018-2019, Graz, Austria).

Special Recognition of the Jury to Dijana Milošević

On the 10th anniversary of the Award, the Jury also decided to give a Special Recognition to Dijana Milošević. “At the very basis of Dijana Milošević’s artistic and scholarly explorations has always been the importance of culture as a continuum, with an emphasis on the multicultural heritage that is at the foundation of our societies. Through many of her works, Dijana Milošević revived forgotten and untold stories that bring us together while celebrating our differences. While questioning our perception, our habits and our past, we can understand the present, so that we can change the future. Among other topics, through her work – lecture performances, art installations and writings -, she has explored European avant-garde movements, such as Zenitism and Dadaism, engaging bold interpretations that provide complex representation of these artistic movements and, through them, of our cultural heritage overall”, noted the Jury.

Reacting to the announcement, Dijana Milošević said: “I feel much honoured and deeply thankful to the Jury to be in the company of the great artists and thinkers of our times. In this moment, when we are facing yet another senseless war, this European Award and this Special Recognition bring hope focusing on amazing human achievements that radiate light through the present moment towards the future. My warm congratulations to the recipient of the Award, Oksana Lyniv, conductor from Ukraine”.

The European Award for Raising Public Awareness on Cultural Heritage  is named after Helena Vaz da Silva (1939-2002), Portuguese journalist, writer, cultural activist and politician, in memory and recognition of her remarkable contribution to the promotion of cultural heritage and European ideals. It has been presented annually, since 2013, to a European citizen whose career has been distinguished by activities that disseminate, defend and promote Europe’s cultural heritage, in particular through literary or musical works, news items, articles, chronicles, photographs, cartoons, documentary features, films, and radio and/or television programmes. The Award has the support of the Portuguese Ministry of Culture, the Calouste Gulbenkian Foundation and Turismo de Portugal.