The Medals of Honour are the highest distinction conferred by Europa Nostra to individuals who have made notable contributions to promoting the mission and raising the profile of the organisation.

The select group of recipients of our Medals of Honour include:

Our Vice-President received a Medal of Honour in September 2021

“For dedicating himself tirelessly, since 2009, to the growth of the organisation’s network and especially to its lobbying and liaison work with the European Institutions, notably through the European Heritage Alliance, of which he was one of the coordinators.”

The Medal was announced by Hermann Parzinger, Executive President of Europa Nostra, and presented to Piet Jaspaert by Sneška Quaedvlieg-Mihailović, Secretary General of Europa Nostra
and Silvia Costa, former Chair of the European Parliament’s Committee on Culture and Education, during the European Heritage Awards Ceremony 2021 taking place in the World Heritage city of Venice. 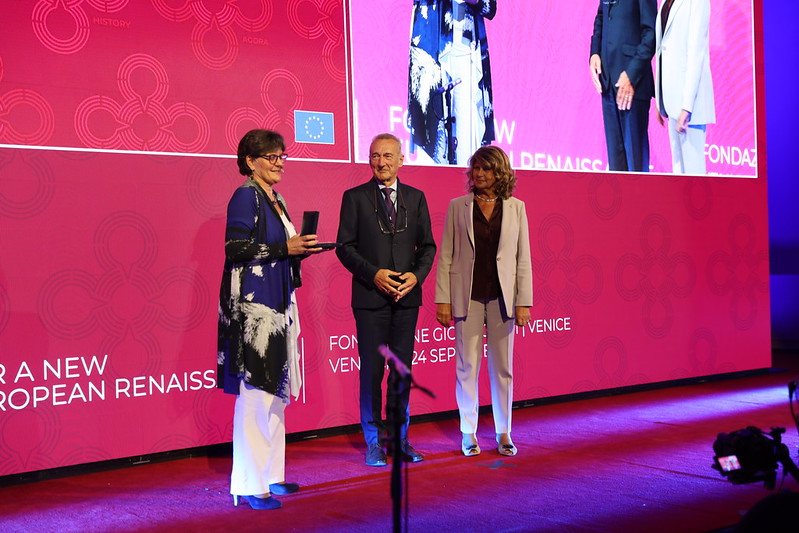 “For his inspiring leadership of Europa Nostra, his strategic vision, his diplomatic talents, his generosity and his wisdom which have contributed to a stronger unity and outreach of our European movement in favour of cultural heritage”. 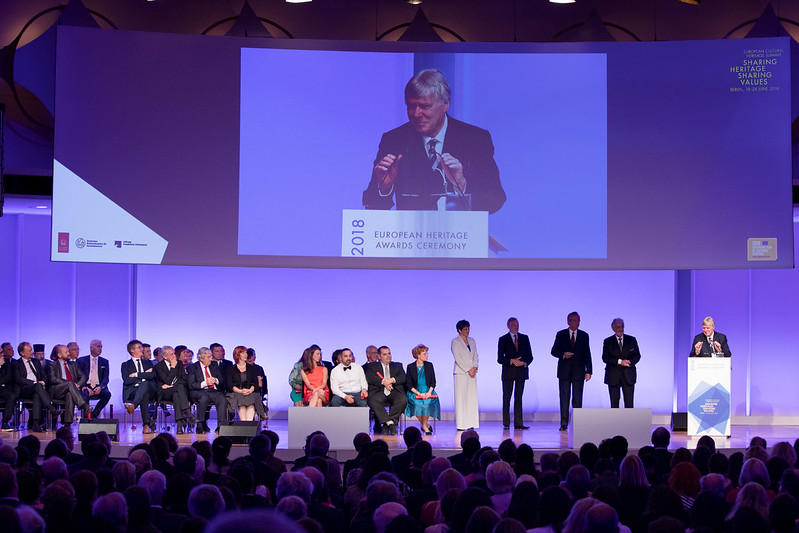 “For his outstanding and generous personal contribution to the development of Europa Nostra through his vast experience as conservation architect and heritage activist, combined with his unwavering and resolute conviction in European values”. 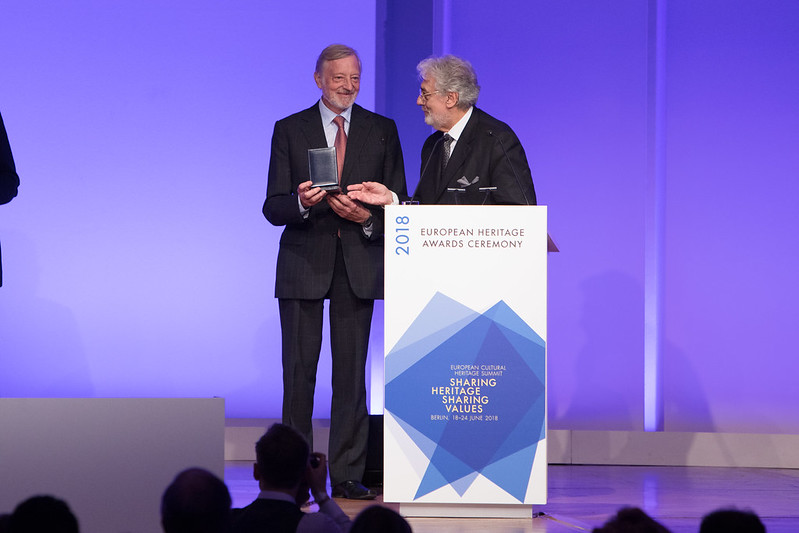 “For his major contribution to raising the public profile and reputation of Europa Nostra through his outstanding knowledge and experience in heritage conservation, combined with his long-term commitment and loyalty to our organisation”. 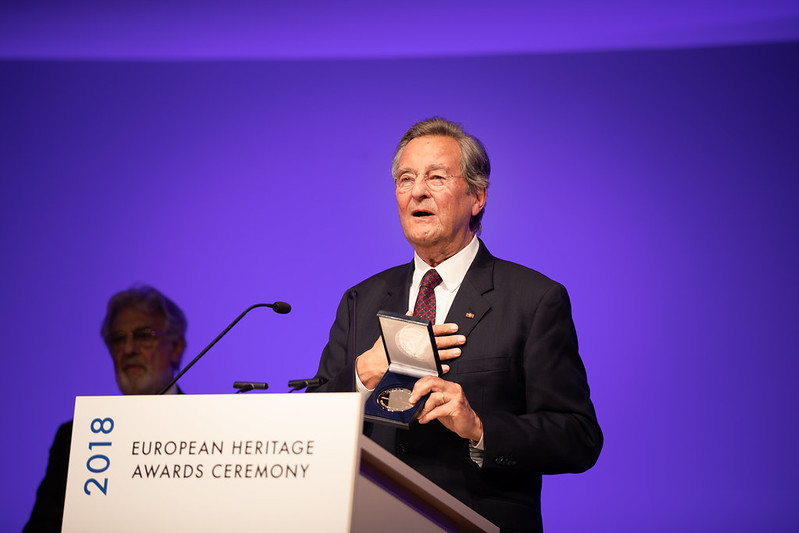 “For his major contribution to raising the public profile and reputation of Europa Nostra through his outstanding strategic insight and diplomatic skills combined with his long-term commitment and loyalty to our organisation.” 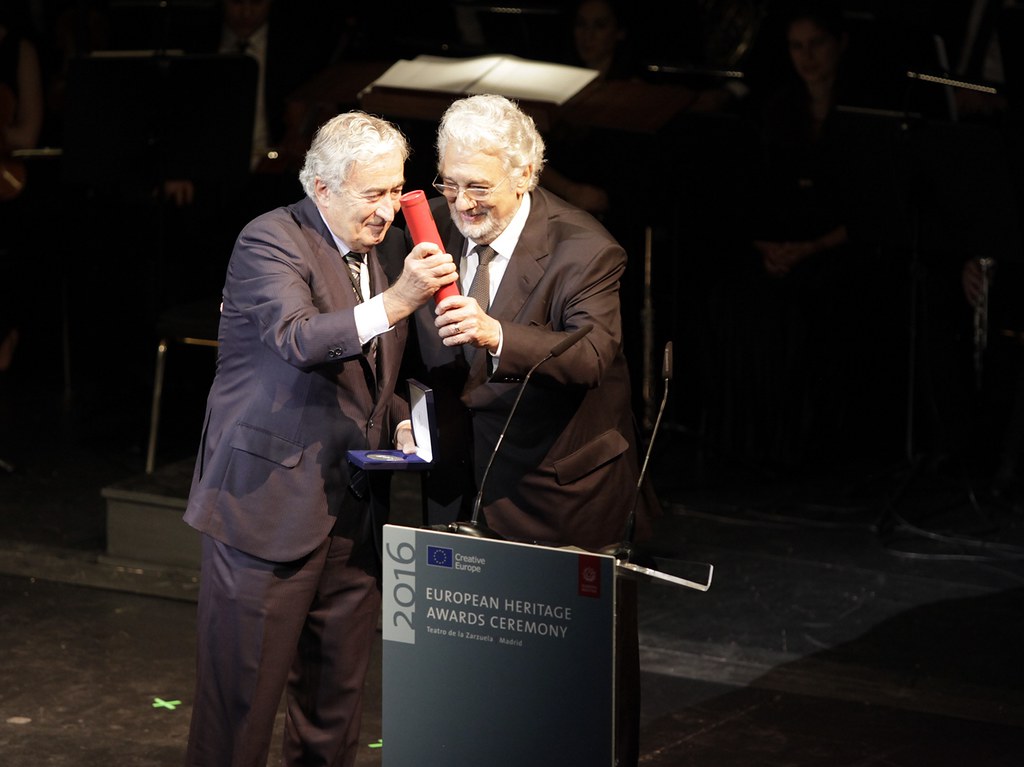 Álvaro Santa Cruz received the Medal of Honour from our President Plácido Domingo during the European Heritage Awards Ceremony held on 24 May at the historic Zarzuela Theatre in Madrid.

“For his visionary and inspiring leadership and his generous voluntary dedication, for his boundless energy and tireless efforts with which he made a unique contribution – over a period of four decades – to Europa Nostra’s mission and has enhanced its continuous growth and development.”

Costa Carras received the Medal of Honour from our President Plácido Domingo during the memorable European Heritage Awards Ceremony held on 16 June at the Odeion of Herodes Atticus, at the foot of the Acropolis, in Athens.

“For the boundless generosity, unrestrained dedication, great energy and remarkable efficiency that epitomize a genuine spirit of volunteerism, and has enabled Europa Nostra to grow and develop from strength to strength over the last two decades”.

“For his major contribution in bringing about the successful and lasting merger between Europa Nostra and the International Castles Institute, and for his wise leadership in extending the spread of representation and scope of activities of the merged organisation and in raising its status and profile with regard to the EU Institutions.”

“For the energy, skill and wisdom he has so generously given to Europa Nostra and its Belgian branch, promoting the conservation of our cultural heritage and for his contributions to our organisation’s governing bodies and publications, especially the hugely successful book ‘The Power of Example’.”

Our former Treasurer received a Medal of Honour in 2002

“For his tireless efforts, as entreprenuer, ambassador and philanthropist, in preserving and promoting the cultural heritage of Cyprus and Europe as a whole, and for his invaluable contribution to the work of Europa Nostra.”

Our former President was awarded a Medal of Honour in 1993

“For his enormous and exemplary contribution to the cause of the conservation and restoration of historic buildings and beauti­ful parks, gardens and landscapes throughout Europe, resulting from his inspiring and successful work as President and then Executive President of Europa Nostra, and subsequent­ly as Executive President of Europa Nostra united with the Interna­tional Castles Institute, over a total period of more than 7 years.”