Venice, 21 September 2021 – The United Nations Secretary-General António Guterres welcomes and fully supports the ‘Ringing the Bells for Peace and Heritage’ initiative, which was undertaken today at 12:00 CET in the entire city of Venice and in heritage sites across Europe by Europa Nostra and its partners. This symbolic initiative marks the UN International Day of Peace and the launch of the European Cultural Heritage Summit 2021 organised in Venice by Europa Nostra. 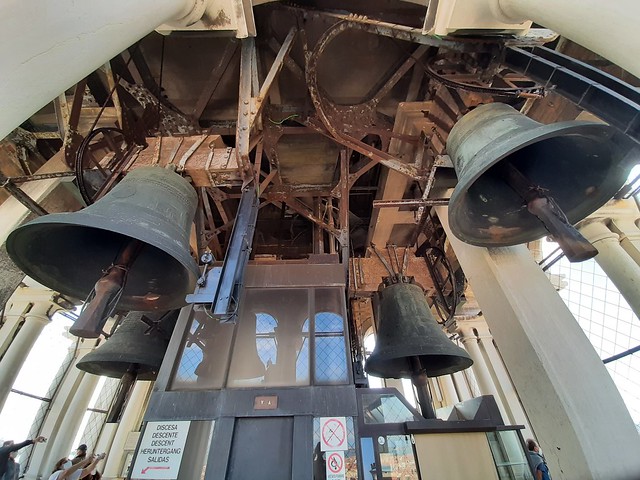 “Today, with St Mark’s Square and all of Venice as its starting point, the bells at some of the world’s most outstanding heritage sites will proudly ring out across Europe. What a powerful and meaningful way to mark this year’s International Day of Peace, which coincides with the start of this year’s European Cultural Heritage Summit in Venice,” conveys the United Nations Secretary-General António Guterres in a written message that was read before the event by Europa Nostra’s Secretary General Sneška Quaedvlieg-Mihailović.

Forty years ago, the International Day of Peace was established by the General Assembly of the United Nations. Twenty years ago, 21 September was officially established as an annual day of non-violence and cease-fire. 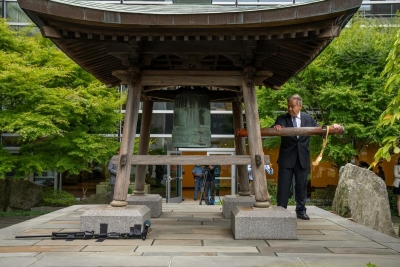 UN Secretary-General rings the Peace Bell during the Ceremony on the occasion of the 40th Anniversary of the International Day of Peace, New York, 17 September 2021. Credits: UN Photo/Manuel Elías

The ‘Ringing the Bells for Peace and Heritage’ initiative stresses the pivotal role of peacekeeping in the safeguarding of cultural heritage and vice-versa. It is also a wake-up-call to find a sustainable future for Venice and its Lagoon, and for other endangered heritage sites in Europe and beyond.

“Let today’s Ringing of the Bells for Peace and Heritage become a resounding call to action! We need it now, more than ever before, because we are simply running out of time. As we learn to live with a global pandemic, and as we discover alarming new evidence of the devastating effects of climate change, it is up to us to take urgent action. We need to “build back better”, so that we can achieve a more equitable future and a more sustainable world,” advocated the United Nations Secretary-General.

From the World Heritage Site of Hattusa, the capital of the Hittite Empire (in present-day Turkey), where the oldest known peace treaty in the world was written more than 3,000 years ago, to the Peace Palace in The Hague (The Netherlands), an iconic place that was recognised for being an embodiment of the values of peace and justice in Europe since 1913; from the Mafra National Palace near Lisbon (Portugal), a World Heritage Site that features the largest set of 18th-century carillon bells in the world, to Dečani Monastery (Kosovo*), one of the most important Medieval religious monuments in Europe; from the Historic Centre of Gjirokastra (Albania), inscribed on UNESCO World Heritage List, to Oslo City Hall (Norway), home of the annual Nobel Peace Prize Ceremony –  these are just a few heritage sites whose bells will ring out today at 12:00.

The ‘Ringing the Bells for Peace and Heritage’ event will be livestreamed between 11:50 and 12:20 CET from the Campanile of the San Marco Basilica and other heritage sites in Venice and across Europe via live.europanostra.org.

The European Cultural Heritage Summit 2021 is taking place this week (21 to 24 September) in the World Heritage City of Venice. The Summit will offer a platform to celebrate excellence in cultural heritage skills and to highlight the value of cultural heritage for a sustainable and inclusive recovery of Europe.

The Venice Summit is organised by Europa Nostra with the support of the European Union as well as in collaboration with other European and Italian partners. The Summit is held under the patronage of the European Parliament, the Slovenian Presidency of the Council of the EU and the Italian Ministry of Culture.

The Summit will mobilise – through in-person and online presence – representatives of the wider heritage community from across Europe and beyond, including civil society organisations; local, regional, national and European authorities; international organisations; policy-makers at all levels; young heritage professionals, students as well as heritage volunteers and enthusiasts.

Due to the limitations imposed by the current health crisis, the Venice Summit is organised in a hybrid format, bringing together a selected and limited number of stakeholders on-site while giving the opportunity to a wider audience to engage with the event virtually, as the main events will be livestreamed via live.europanostra.org.

For a short description about the main events of the Summit and the related detailed programmes, please visit
www.europanostra.org/european-heritage-summit