Europa Nostra participated in the joint meeting of civil society stakeholders and National Coordinators for the European Year of Cultural Heritage (EYCH) 2018 from EU member states. This meeting was held in Brussels on 7 September and took place one day before the second meeting of the Stakeholders Committee for the EYCH. The joint meeting not only provided for additional networking opportunities but also for detailed presentations of how different EU policy departments contribute to the EYCH 2018. 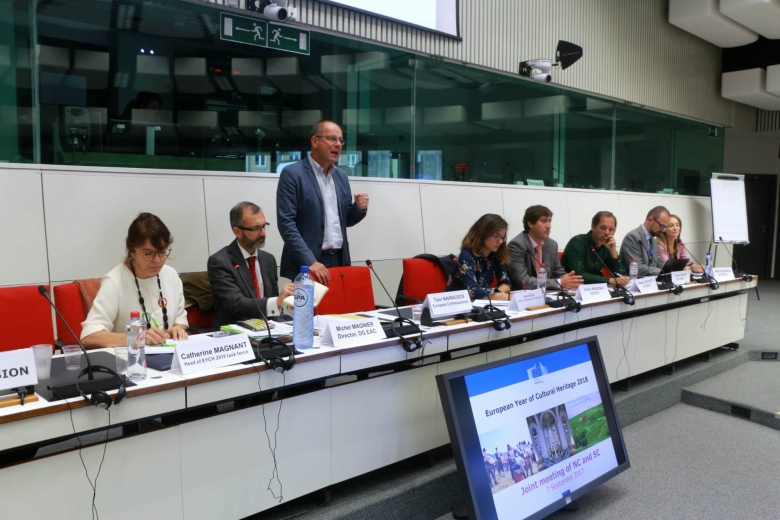 Participants of the joint meeting with National Coordinators for the Year were welcomed by European Commissioner Tibor Navracsics who affirmed that “cultural heritage makes the notion of Europe meaningful” and that “culture is the pillar of Europe”. His words were enthusiastically received by the audience. The Commissioner confirmed the intention to use the European Year of Cultural Heritage to develop a meaningful future scenario for Europe. His introductory words raised expectations that the European Commission’s President Jean-Claude Juncker would make a strong reference to the European Year in the ‘State of the Union’ speech on 13 September. The Commissioner also made the link with the tourism sector for which heritage could provide the content. This has certainly been seen in the context of the current 2017 International Year of Sustainable Tourism for Development and the upcoming 2018 EU-China Tourism Year which will coincide with the EYCH and be officially launched in Venice, a destination increasingly struggling with mass tourism. Europa Nostra designated the Venice Lagoon as THE most endangered heritage site in Europe in 2016 and organised an expert mission to visit the city and its lagoon earlier this year.

Further to the Commissioner’s remarks, Michel Magnier, Director for Culture and Creativity at the DG Education and Culture of the European Commission, confirmed that “the political level is increasingly convinced that cultural heritage counts for Europe”, thus, alluding to the title of the major report ‘Cultural Heritage Counts for Europe’, which was recently produced by Europa Nostra and five European partners.

This joint meeting of stakeholders and National Coordinators was then dedicated to presentations about the initiatives planned by diverse departments of the European Commission, thereby responding to the four objectives of the European Year, namely innovation, sustainability, protection and engagement. Representatives from across the EU administration outlined the heritage dimension in their specific policy areas and how their work will contribute to enhancing the European Year of Cultural Heritage 2018. Besides education and youth, this comprises policy areas like research, regional development, the environment, maritime affairs and digital technologies to name but a few. 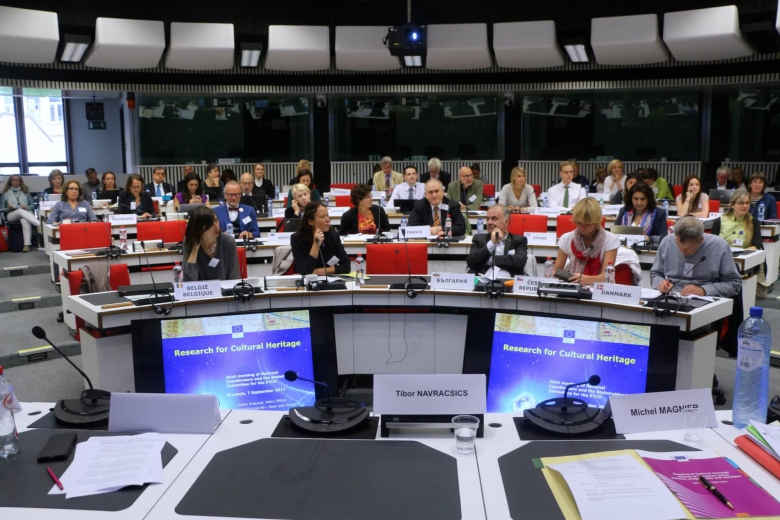 European Parliament member and former Chair of the EP Culture Committee, Silvia Costa, who attended the joint meeting as observer, pointed out that these initiatives could also serve as a basis for a new agenda for culture for the European Union.

Europa Nostra was represented by its Secretary General Sneška Quaedvlieg-Mihailović who emphasised that the European Year should be used “to demonstrate the added value of the EU to citizens”. In light of the specific focus on endangered heritage, she strongly advocated for identifying unsustainable and unsuitable development as a source of the many threats to already endangered heritage – some of which includes EU-funded projects.

This joint meeting was followed by a visit to the recently opened House of European History and a networking reception for stakeholders and National Coordinators in the beautifully restored waiting room of the former dental clinic in the Eastman building.

The next meetings will take place in Milan, Italy, in December 2017, in conjunction with the European Culture Forum on 7-8 December:

6 December – meeting of the National Coordinators for the EYCH 2018

The European Commission convenes meetings of National Coordinators for the EYCH from EU member states – back to back with the meetings of the Stakeholders Committee so as to allow for exchanges among the two groups.

The Stakeholders Committee is composed of 32 civil society organisations, selected further to an open call for applications, and 3 international organisations (Council of Europe, ICCROM and UNESCO) (see list of members). As part of a structured dialogue with the cultural sector, the Committee assists the European Commission in preparing and implementing the European Year of Cultural Heritage 2018. The first meeting of the Stakeholders Committee took place on 28 April 2017.