The European Heritage Policy Agora “For a Value and Culture-Driven Europe”, held on 27 September at the Žofín Palace, was the closing event of the European Cultural Heritage Summit 2022 in Prague. This inspiring full-day event addressed some of the most pressing challenges facing the heritage ecosystem in Europe, such as the need to mobilise forces and voices in solidarity with Ukraine’s endangered cultural heritage; the role of cultural heritage in fostering peace and solidarity within our societies; and the values of beauty and sustainability for an inclusive green transformation. The Policy Agora benefited from contributions from a wide variety of public and private heritage stakeholders, policy-makers at all levels, young heritage professionals and cultural actors. It culminated with the launch of the Prague Manifesto “For a Value-based and Culture-driven Europe”, which contains the key policy messages formulated during the Agora and the entire Summit. 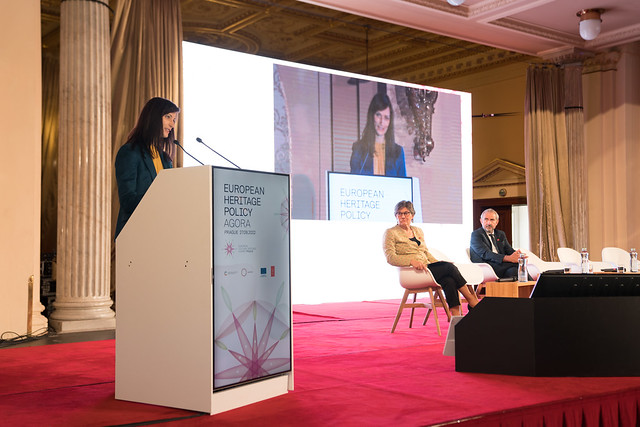 The opening session was moderated by Sneška Quaedvlieg-Mihailović, Secretary General of Europa Nostra. “The Policy Agora will feature intense and important conversations of great importance for the future of Europe. We shall strive for more – we shall strive for a Value-based and Culture-driven Europe!”, she stated.

In their introductory remarks, the key speakers linked the work and vision of their institutions to each of the three topics of the Policy Agora: mobilising forces and voices in solidarity with Ukraine’s cultural heritage; cultural heritage as a catalyst for peace and solidarity; and beauty and sustainability at the core of Europe’s green transformation

🏛️#EuropeanHeritageSummit – Policy Agora Opening: Inspiring words by 🇪🇺Commissioner @GabrielMariya who thanks @europanostra for being a “longstanding & unwavering partner of the @EU_Commission” & recalls the importance of “coming together to defend a culture & value-based Europe” pic.twitter.com/OdBK9Mc2aY

Mariya Gabriel, European Commissioner for Innovation, Research, Culture, Education and Youth, made an inspiring speech and thanked Europa Nostra for being a “longstanding and unwavering partner of the European Commission”. She also recalled the importance of “coming together to defend a culture and value-based Europe”.

Martin Baxa, Czech Minister of Culture and Acting Chair of the rotating EU Council Presidency, opened the Policy Agora. “The protection of our cultural heritage is a common European task to which this Summit contributes,” he stated, referring to the motto of the Czech Presidency of the Council of the EU “Europe as a Task: Rethink, Rebuild, Repower”, which takes inspiration from the speech “Europe as a task” made by the former Czech President Václav Havel at the Charlemagne Prize Ceremony in 1996.

🏛️ #EuropeanHeritageSummit – Vice-Mayor of @PragueEU District 1 🇨🇿🇪🇺Petr Burgr welcomes us at Žofín Palace’s Neo-Renaissance building “substantially renovated during the 90s, it is now one of the most relevant cultural centres in Prague to which I am personally attached”

Vlastislav Ouroda, Czech Vice-Minister for Cultural Heritage, made a forceful statement stressing that “a value and culture-driven Europe is an important condition for successful and peaceful life in our beloved part of the world”.

🏛 #EuropeanHeritageSummit-🇺🇦 Minister of Culture & Information Policy @otkachenkoua moving words at our Policy Agora Opening “my request to 🇪🇺 is not to be silent, but to raise your voice to defend our fundamental values – #StandWithUkraine, its freedom, territory & culture!” pic.twitter.com/JE5fNaaPOw

Oleksandr Tkachenko, Minister of Culture and Information Policy of Ukraine, made a powerful appeal. “My request to Europe is not to be silent, but to raise your voice to defend our fundamental values – Stand with Ukraine, its freedom, territory and culture!”

Hermann Parzinger, Executive President of Europa Nostra, highlighted: “If we want Europe to be a beacon of solidarity, peace and sustainability, we ought to rediscover and care for our common ground and shared foundations – our Togetherness.”

🏛👫 #EuropeanHeritageSummit – At Youth intermezzo on #VishyvankaDay, Lesia Voroniuk, winner of a #EuropeanHeritageAward 2022🇺🇦 explains how #CulturalHeritage can be a symbol & peace-making tool in the context of Russian war in Ukraine #StandWithUkraine #EYY22 pic.twitter.com/FWpi41Te6e

The Vice-Mayor of Prague District 1, Petr Burgr, welcomed the participants at Žofín Palace noting that this Neo-Renaissance building, which was “substantially renovated during the 1990s, is now one of the most relevant cultural centres in Prague”.