The European Heritage Policy Agora “For a Value and Culture-Driven Europe”, held on 27 September at the Žofín Palace, was the concluding event of the European Cultural Heritage Summit 2022 in Prague. This inspiring full-day event addressed some of the most pressing challenges facing the heritage ecosystem in Europe, such as the need to mobilise forces and voices in solidarity with Ukraine’s endangered cultural heritage; the role of cultural heritage in fostering peace and solidarity within our societies; and the values of beauty and sustainability for an inclusive green transformation. The Policy Agora benefited from contributions from a wide variety of public and private heritage stakeholders, policy-makers at all levels, young heritage professionals and cultural actors. 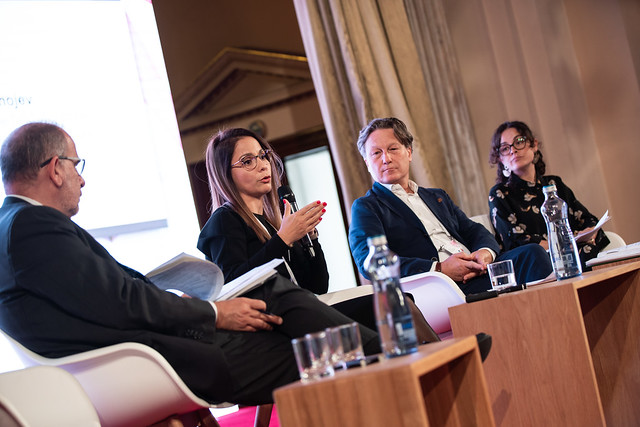 The second panel, entitled “Cultural heritage as a catalyst for peace and solidarity” explored the role of cultural heritage as a powerful vector to foster more inclusive and peaceful societies, as highlighted in the Council Conclusions on EU Approach to Cultural Heritage in conflicts and crises. Whether it is by nurturing intercultural or international relations based on the notion of shared heritage between communities, countries and regions or by celebrating our unity in diversity, cultural heritage can drive mutual understanding and trust-building, ultimately serving as a vector for peace and sustainable development. In this frame, the panel raised the vital importance of protecting and safeguarding cultural heritage during crises through awareness-raising, conflict-sensitive approaches and in partnership with relevant actors at all levels.

The panel was moderated by Luca Jahier, former President of the European Economic and Social Committee, who stressed: “Culture unites the world. It could and should be a vector for dialogue and must become the most powerful vector for European external relations”. He referred to the Opinion REX/548 of the European Economic and Social Committee on “Cultural diplomacy as a vector of EU external relations: New partnerships and role of CSO”, of which he has acted as Rapporteur and to which Europa Nostra has contributed substantially.

🏛️🇬🇷 #EuropeanHeritageSummit – We are honoured that the Mayor of #Athens @KBakoyannis delivers a special address to our Policy Agora “Nature, Culture & Democracy are 3 fundamental blocks of our DNA. Democracy is associated if not identified with the history of Europe” pic.twitter.com/VJoS7oE9hU

The panel was introduced by Kostas Bakoyannis, Mayor of Athens, who highlighted the key role of democracy for the European project. “Nature, Culture and Democracy are three fundamental blocks of our DNA. Democracy is associated if not identified with the history of Europe”.

André Wilkens, Director of the European Cultural Foundation, emphasised the need for public-philanthropic partnerships to foster European solidarity. “Putin has reminded us of who we are and what we want to be. It is a wake-up call to invest in this miracle of Europe as a cultural community,” he said.

Jermina Stanojev, Independent Expert in Cultural Heritage and International Cultural Relations, highlighted: “We are facing global crises that require us to be more accountable for global, humble, transparent and long-term cultural relations in the world”.

Lorena Aldana-Ortega, European Policy Coordinator at Europa Nostra, stated that “Europa Nostra is well aware that international cultural cooperation is not only desirable but essential for the heritage ecosystem to stay relevant, responsive, resilient and sustainable, both in environmental and economic terms“. 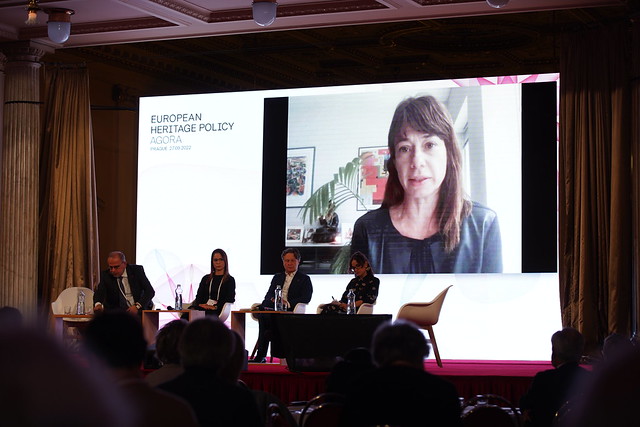 Connecting online, Gaia Danese, Cultural Diplomacy Advisor at European External Action Service, underlined the need “to act globally and horizontally, to work with civil society, cities and mayors and to connect communities with the international relations scene in its largest conception”.

The panel was followed by a youth intermezzo, a heritage talk by Nikolaos Degleris, Coordinator of the Europa Nostra Heritage Hub for South East Europe and the Eastern Mediterranean based in Athens.

At the end of the Policy Agora, the Prague Manifesto “For a Value-Based and Culture-Driven Europe” was presented, encapsulating the key messages of the Agora and the entire Prague Summit. The Prague Manifesto makes a strong plea to all European leaders as well as all actors of the cultural and heritage worlds at all operational levels to fully recognise the fundamental and irreplaceable role of culture and cultural heritage as a vector to address Europe’s manyfold challenges to build a more sustainable, more inclusive, more peaceful and more beautiful Europe. In particular, the Prague Manifesto calls to “Designate culture and cultural heritage as strategic assets to foster value and equally-based cultural diplomacy and international cooperation which promote peace, solidarity, dialogue, social and economic progress and stability in the wider Europe and across the globe”.