The beginning of the year 2021 was marked by the launch of the pioneering New European Bauhaus (NEB) movement. This initiative of the European Commission adds a much-needed cultural dimension to the European Green Deal to engage and reach the hearts and minds of citizens across Europe, and thus to rethink and design a collective future around the core values of sustainability, aesthetics and inclusiveness.

Europa Nostra is firmly convinced that Europe’s cultural heritage offers an inspiring framework for social cohesion and sustainable lifestyles which contribute greatly to the wellbeing of citizens and their communities. Already in December 2020, Europa Nostra voiced the need to duly include cultural heritage as an integral part of the New European Bauhaus in a statement conveyed to the President of the European Commission Ursula von der Leyen. 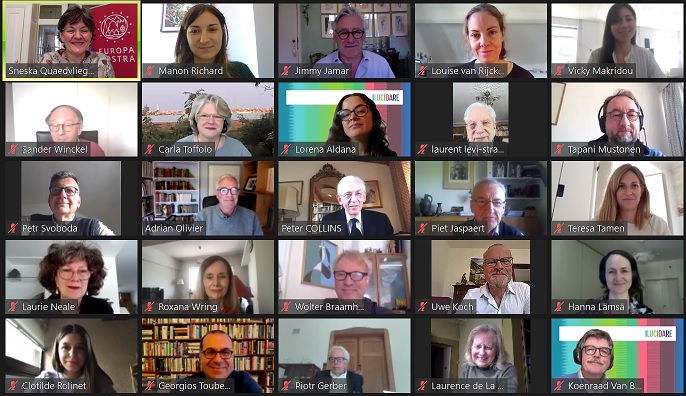 We are also committed to actively generating and mobilising knowledge and action together with our wide network of professionals, students and volunteers. In this respect, we have convened a “Mobilising Meeting” with members of our Board and Council on 16 April (see image above), and a special policy meeting of the European Heritage Alliance on 14 April, to discuss their respective contributions to the NEB. Europa Nostra is delighted that five other members of the Alliance have been selected as official partners of the NEB, namely – ACE (Architects’ Council of Europe), EUROCITIES, Future for Religious Heritage, IFLA Europe (International Federation of Landscape Architects) and Mad’in Europe.

We can also count on the expertise and guidance of the highly qualified members of our newly launched Europa Nostra New European Bauhaus Taskforce. The first meeting of the Taskforce on 1 April resulted in the publication of Europa Nostra’s “Partner Contribution” ahead of the first New European Bauhaus Conference, which took place on 22-23 April and gathered more than 8,000 participants.

On this occasion, Europa Nostra co-facilitated and presented the conclusions of a workshop on “Rediscovering the Sense of a Place”, together with German Architect and Set Designer Pia Maier Schriver. Our inspiring exchanges revolved around the need of a more holistic approach to shaping spaces which are sustainable and inclusive and which bring beauty, hope and joy to people’s lives.

Europa Nostra also joined the New European Bauhaus Collective, composed of 15 European cultural and creative networks committed to make the most out of this important initiative. Within this mobilisation, we have endorsed the related statement “The New European Bauhaus: Making the Renovation Wave a Cultural Project”, which highlights the essential cultural dimension of the NEB and calls for a much-needed holistic approach that enhances economic, social, environmental and cultural values. Europa Nostra also proudly contributed to the online conference “Common Ground: Making the Renovation Wave a Cultural Project”, organised by the NEB Collective on April 29. On this occasion, we have joined forces with our colleagues from Architects’ Council of Europe and Trans Europe Halles to co-host an inspiring workshop on “Adaptive Re-use: preserving and enhancing the values of our built environment”.

Our contribution to the New European Bauhaus shall keep unfolding in the coming weeks, we therefore invite you to follow us on social media to find out more! In the meantime, we encourage you to consider applying for the just launched NEB Prizes that duly include the fields of preserved and transformed cultural heritage, urban and rural regeneration, adaptive re-use, co-evolution of built environment and nature, and the mobilisation of cultural communities.