Europa Nostra – the European voice of civil society committed to cultural and natural heritage – together with its partner, the European Investment Bank Institute, this morning announced the List of 7 Most Endangered monuments and heritage sites in Europe for 2021:

The announcement of the 7 Most Endangered sites 2021 was made at an online event co-hosted by high level representatives from Europa Nostra and the European Investment Bank Institute, with the participation of Mariya Gabriel, European Commissioner for Innovation, Research, Culture, Education and Youth. Nominators and representatives of the 7 selected sites contributed to the online event, which attracted over 300 people from across Europe and beyond.

Speaking at the online event, Guy Clausse, Executive Vice-President of Europa Nostra, emphasised: “The aim of our 7 Most Endangered List 2021 is to ring the alarm bell about the serious threats which these sites are facing. From an outstanding medieval monastery to a remarkable Renaissance garden, from industrial and modern constructions to iconic cultural landscapes: these sites are important testimonies of our shared past, memory and identity. At a time when our continent is experiencing an unprecedented crisis, Europa Nostra wishes to express its solidarity and lend its support to local communities across Europe who are determined to save these endangered heritage treasures. Through our wide pan-European network of members and partners, we will mobilise diverse expertise and resources to help save these heritage sites, which should be recognised as powerful vectors of sustainable development as well as vital tools for peace and dialogue between various communities. Together, we can do it!”

Francisco de Paula Coelho, Dean of the European Investment Bank Institute, stated: “Once again, the EIB Institute is standing side by side with Europa Nostra, our long time partner in safeguarding European cultural heritage sites in danger. Europeans take pride in cultural heritage. It brings them together. For the EU Bank it is only natural to help strengthen this link through our support and commitment to the now yearly 7 Most Endangered Programme”.

Reacting to the announcement of the 7 Most Endangered sites 2021, Mariya Gabriel, European Commissioner for Innovation, Research, Culture, Education and Youth, said: “Europe’s cultural heritage is our past, present and future. It is part of our identity and brings people from across our continent together around shared values and experiences. It is precious and deserves our utmost attention and protection. Through the 7 Most Endangered Programme, we put the spotlight on European heritage in peril, raising awareness and paving the way for a viable future for the selected sites”.

The 7 Most Endangered sites for 2021 were selected by the Board of Europa Nostra from the 12 sites shortlisted by a panel of international experts. The selection was made on the basis of the outstanding heritage significance and cultural value of each of the sites as well as on the basis of the serious danger that they are facing. The level of engagement of local communities and the commitment of public and private stakeholders to saving these sites were considered as crucial added values. Another selection criterion was the potential of these sites to act as a catalyst for sustainable socio-economic development as well as a tool for promoting peace and dialogue within their localities and wider regions.

Teams of experts representing Europa Nostra and the European Investment Bank Institute, together with the organisations that nominated the sites and other partners, will assess each case by collecting information and by meeting with key stakeholders. These multidisciplinary teams will provide expert advice, identify possible sources of funding and help mobilise wide support to save these heritage landmarks. At the end of the assessment process, they will formulate and communicate a set of recommendations for future action.

The 7 Most Endangered Programme is run by Europa Nostra in partnership with the European Investment Bank Institute. It also has the support of the Creative Europe programme of the European Union. Launched in 2013, this programme forms part of a civil society campaign to save Europe’s endangered heritage. It raises awareness, prepares independent assessments and proposes recommendations for action. It also provides a symbolic grant of €10,000 per listed site. The listing of an endangered site often serves as a catalyst and incentive for the mobilisation of necessary public or private support, including funding. 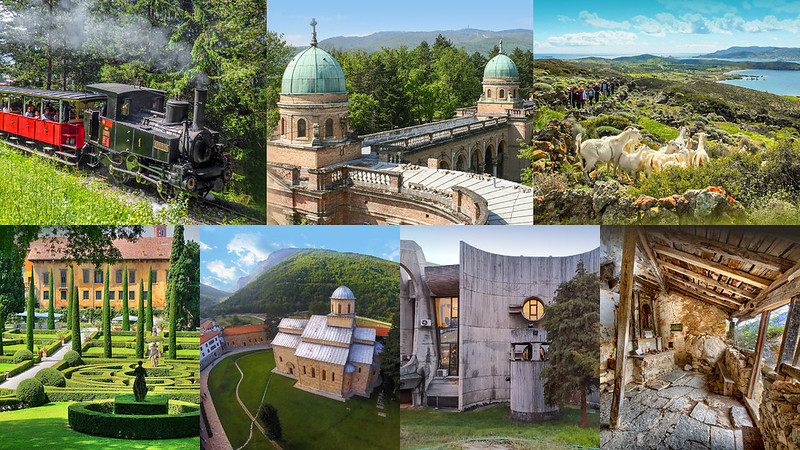 The 7 Most Endangered heritage sites in Europe for 2021

(listed in alphabetical order of the country where they are located)

Achensee Steam Cog Railway, Tyrol, AUSTRIA
This is the only public railway in the world that, since it was opened in 1889, still uses all of the equipment of a late 19th-century railway system. In the spring of 2020, the Achensee Railway company went bankrupt and the subsidies which were promised by the Tyrolean provincial government were never disbursed. This authentic example of European industrial heritage, which should be celebrated during the European Year of Rail 2021, is at risk of fast deterioration due to lack of maintenance. Nominated by ICOMOS Austria, as part of ICOMOS, a member of the European Heritage Alliance.

Cemetery Complex of Mirogoj, Zagreb, CROATIA
Built between 1876 and 1929, this is a fine example of European Neoclassical architecture. In March and December 2020, the city of Zagreb was hit by two major earthquakes, which caused severe damage to the site. Apart from structural damages and cracks, the arcades, the pavilions, the Church of Christ the King and many tombstones and sculptures have also been heavily damaged. The Ministry of Culture and Media of Croatia intervened with emergency measures. However, severe rains and the COVID-19 pandemic have impeded assessment and conservation processes. Nominated by the Ministry of Culture and Media of Croatia nominated the site to the 7 Most Endangered Programme 2021.

Five Southern Aegean Islands, GREECE
The islands of Amorgos, Kimolos, Kithira, Sikinos and Tinos share the so-called “Cycladic landscape”, which forms a vital part of Greek and also European identity. This iconic and harmonious landscape is in grave danger due to the proposed programme to install wind turbines on these five islands, often side by side with archaeological sites, some within protected Natura 2000 areas and as a backdrop to traditional villages.
The siting of renewable energy infrastructure in (protected) cultural landscapes is among the potential conflicts between heritage safeguarding and European Green Deal action identified in the recently launched European Cultural Heritage Green Paper “Putting Europe’s shared heritage at the heart of the European Green Deal”. This Paper reflects the firm conviction that, in the case of such tensions, ‘win-win’ scenarios are both desirable and attainable on the basis of a proper consultation process with local communities and heritage experts.
Nominated by Elliniki Etairia, Europa Nostra’s country representation in Greece.

The Giusti Garden, Verona, ITALY
The Giusti Garden dates back to 1570 and has been open to the public ever since. It is one of the finest examples of a typical Tuscan Renaissance garden that has survived in its original form until the present day. In 2020, the privately owned Garden Giusti was hit by three severe thunderstorms which caused extensive damage to the entire site. About 30 trees – one third of the total – and part of the boxwood labyrinth have been uprooted along with some additional boxwood in the parterre. Three 17th-century statues and the lighting and irrigation systems have also been broken or severely damaged. Nominated by an individual member of Europa Nostra.

Dečani Monastery, KOSOVO*
Built in the first half of the 14th century, this Serbian Orthodox Christian Monastery is one of the most important Medieval religious monuments in Europe. The monastic complex is surrounded by a beautiful forest which forms part of the cultural landscape which is inseparable from its priceless built cultural heritage. The Dečani Monastery has been on the UNESCO List of World Heritage in Danger since 2006. Protected 24/7 by KFOR peacekeeping troops, the Monastery and its surroundings continue to face threats to their integrity due to unresolved legal and institutional issues. Nominated by Future for Religious Heritage, a member of the European Heritage Alliance.

Central Post Office, Skopje, NORTH MACEDONIA
Finalised in 1974, the Central Post Office represents the modernist Brutalist architectural style of the post-war era. The building’s powerful structure, made of reinforced concrete in the shape of a lotus flower, was intended to symbolize the reconstruction of Skopje after the heavy earthquake of 1963. The building survived a massive fire in 2013, but the original glazing of the dome, the murals, and the custom-made furnishings and lighting were either completely lost or suffered serious damage. The building is today even more endangered due to disuse and deterioration. Nominated by the Institute for Research in Environment, Civil Engineering and Energy.

San Juan de Socueva Chapel and Hermitage, Cantabria, SPAIN
San Juan de Socueva is an ancient hermitage and chapel set into the rocky mountains just south of the municipality of Arredondo, Cantabria, in the north of Spain. The chapel, which has recently been dated back to 660-680 A.D, still maintains its religious function and is deeply rooted in the community. The state of conservation of San Juan de Socueva is very worrying. The portico is in an advanced state of disrepair. The monument itself is vulnerable to visitors who can enter freely and cause damage. Nominated by Future for Religious Heritage, a member of the European Heritage Alliance.

About each listed site